Speaking Up
“I don’t see a brighter future beyond the pandemic”
Historians Talk About Disease
June 1, 2020 Mukulika R in conversation with Tanika Sarkar

Epidemics have altered the course of history in more ways than one, since they have given rise to certain socio-political and cultural developments. They produce specific vulnerabilities and issues in every society. They have had a significant effect on personal relationships, art, literature, and reinforced inequalities and discrimination of various kinds across the world.

To make sense of all this, the Indian Cultural Forum has begun a mini-series with Indian historians. In the first feature, Mukulika R spoke to Romila Thapar and in the second, to Uma Chakravarti. In the third, we speak to Tanika Sarkar, who explores why prejudices get exacerbated during catastrophes and whether the pandemic is a portal. 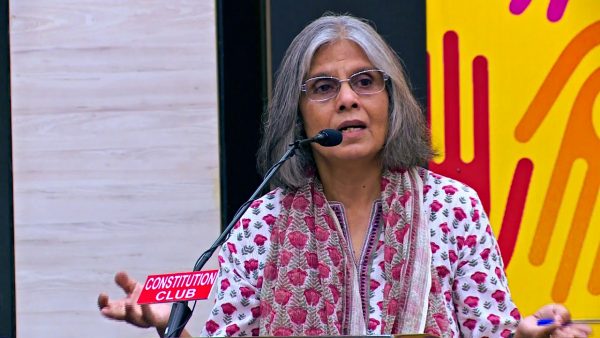 Mukulika R (MR): We have witnessed how scapegoating and certain prejudices get exacerbated in times of such crises on the one hand, and how power equations get reinforced on the other. Could you explain this situation?

Tanika Sarkar (TS): I think when unexpected catastrophe strikes, people need to blame someone for it – and if there are well-worn figures who have already been demonised, then they become easy targets. It is a variant of witch hunting. Remember, campaigns against Jews built up for their imagined role for Germany's defeat, because of the existing tradition of anti Semitism. In the Indian case, the authorities implicitly encourage that and the media also dwells heavily on the role of the usual suspects: the Tablighis, the mosque gatherings. The longer the catastrophe lasts, the wider the net becomes. I have no doubt that it will soon spread to all those who dissent from Hindutva in any form.

Also Read: “The fleeing labourers are caught in an unusual combination of crises”

MR: Epidemics are considered by many to be capable of altering the course of history and opening new worlds, by stirring up demographic, economic, social, and cultural changes, often citing that the European Renaissance took birth in the devastation caused by the plague. Do you agree with the argument that the pandemic is a portal?

TS: I do not see a brighter future beyond the pandemic – rather the obverse. Under cover of the pandemic, our rulers are tightening all the screws they have always wanted to tighten. And the emergency situation allows them to do so with impunity. It allows them to muzzle criticism as much as possible, or to mute it, and it allows it to enact draconian labour and environmental laws in the name of increasing production when actually it wants to ease up entry of multi-national investments which will help not labour but Indian business groups, close to ruling circles.

Also Read: “A healthcare system covering everyone must be put in place”

I think there is no natural law that light follows darkness in human affairs. Improvement depends on  the presence of an effective opposition that can really take up the cause of dying labourers and civil and human rights activists who are being systematically silenced. However, all we have are some verbal disclaimers from opposition parties and groups. Soon, real news about critical areas will also disappear from the public domain and let in a hundred years of solitude.

Tanika Sarkar retired as a professor of history at JNU in New Delhi. Her most recent research focuses on the rise of the Hindu right in India with a focus on its impact on women. Sarkar is the author of many books including Hindu Wife, Hindu Nation: Community, Religion, and Cultural Nationalism (2001) and Rebels, Wives, Saints: Designing Selves and Nations in Colonial Times (2009).
Mukulika R is a member of the Editorial Collective at Indian Cultural Forum, New Delhi.