A comprehensive biography of one of the most influential political and cultural figures in Tamil Nadu’s history, Karunanidhi: The Definitive Biography, by Vaasanthi, covers varied aspects of the multifaceted individual and offers a clear perspective into his childhood, his family life, and his attempts to balance his secular views with realpolitik. The book is also about the multiple contexts that shaped the man, which naturally makes it an account of the Dravidian movement too, of which Karunanidhi was part from a very young age. The book is an intensely researched one, containing personal anectodes, eyewitness accounts and other details from the life of a man who occupied a siginificant place in both state and national politics for half a century — making it a must read.

Below are some significant excerpts from chapters, “Born to Rebel” and “Autumn of the Patriarch”, of the book. 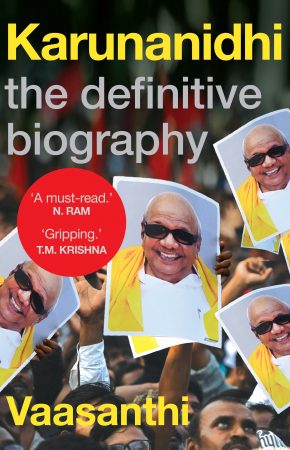 The boy loved to hear his father play the nadaswaram, the traditional musical instrument played at occasions auspicious and sacred. Appa (father) was playing raga Sankarabharanam, which he especially loved. Appa seemed to be in another world, eyes closed, oblivious to his surroundings. The boy too closed his eyes, taking in the beauty of the melody, shaking his head in appreciation when the music reached moments of special nuance and delicacy.

Lost in the music, both father and son were jolted out of their reverie by a sharp knock on the front door.

The man standing in the doorway said, ‘Pannaiyar [landowner] wants you to come and see him.’

The man did not step inside the house, nor did Appa invite him in. He gently put the instrument back in its cover, threw a thundu (towel used to cover the upper body) across his bare chest and followed the man, who walked ten steps ahead of him. Appa walked barefoot. Th e boy too ran barefoot alongside him. He was
used to walking without shoes.

They arrived at a large house. In the front porch hung a swing made of solid, polished teak with silver cups fastening its heavy chains to the ceiling. Th e man sitting on it was chewing betel leaves, and there was a silver box with betel leaves beside him.

The boy watched his father’s demeanour change as he approached the landowner. He removed his thundu and tied it
around his waist like a belt, leaving his chest bare. With his torso bent, he covered his mouth with his palm and said, ‘Vanakkam, Sami!’ Respects to you, sir.

‘Sami’ opened his paan-stained mouth and said something that the boy did not hear. Appa’s body shrank, as if in deference and submission.

As they walked back home he found that the thundu was back on his father’s chest. Appa was humming a tune. Fighting his tears, the boy asked, ‘Why did you remove your thundu before the Pannaiyar?’

Appa looked at him, surprised. He did not expect the little fellow to ask him such a question.

Appa did not answer.

The boy was angry. He was proud of his father. He was a good farmer. A learned man, who could read and write Sanskrit and Tamil. He could recite the Ramayana and Mahabharata better than the pandits. He was a poet. He wrote funny poems that made people laugh and clap. One of Appa’s poems was about god and a temple and a woman who slipped into the bushes with other men while her hapless husband was silent like the god in the temple. It looked like Appa sided with the woman. He would write satirical poems even about the pannaiyar and regale his friends. But the bravado ended there. Before the pannaiyar he was a nobody. He could not even cover his chest. He had to stand at a distance. He was just a nadaswaram player, a ‘nayanakkaran’, and nothing more. No respect even for the divine music he played.

Muthuvelar wanted his son to learn the nadaswaram, as was the tradition in the family. But the boy refused.

‘I will not play the instrument,’ he said firmly.

‘Why?’ asked the father.

Muthuvelar could only sigh and say, ‘All right, then you must go to school and study.’

The boy smiled. That was his fi rst revolt. And his first victory.

Karunanidhi was not yet ten years old. Th e fl ame of rage and humiliation that was lit in his heart the day he went with his father to the pannaiyar’s house continued to smoulder throughout his life.

Muthuvelar and Anjugam were simple folk, god-fearing and devout, who belonged to the small Isai Vellalar community of peasant stock, which traditionally played musical instruments, especially the nadaswaram, at temple festivals and at the homes of other castes during functions. After two daughters, the muchawaited son, for whom the couple had observed fasts and off ered special prayers to the gods, was born on 3 June 1924, in the sleepy village of Thirukkuvalai, near the famous temple town of Thiruvarur.

Autumn of the Patriarch

You stopped speaking – did you think there was nothing to gain by
Speaking to us?
Or, did you think you have spoken all that had to be said?
Don’t you know that we are the keepers of your words?
Our world will cease to exist without you …
You sit like the Buddha under the Bodhi tree
We wait – even those who hated you, abused you,
Who said you were the reason for all the ills that affl ict the Tamils,
all wait with us for a few words
That will lead us through the stormy way …

These were the anguished words that Kanimozhi penned in Tamil when Karunanidhi could no longer speak after the tracheostomy tube had been inserted in his windpipe to help him breathe. It was a cruel fate for a man known for his eloquence and outstanding oratorical skills. His muse, the Tamil language, seemed to have deserted him. Was he being punished for having been overindulgent in the past, producing millions of words day after day as if there was no tomorrow? Did the muse now say to him, ‘Enough, now it is time for you to rest’? How could he express the thoughts that kept crowding his brain, which was still razor-sharp? He could not even use his fi ngers to write any more.

He had fought many battles – won some and lost many. At times he acknowledged the folly was his alone. Like Shakespeare’s Cassius, he believed in the idea that ‘the fault is not in our stars, but in ourselves’. He fell countless times but picked himself back up. He was quick with a joke to dispel the gloom when he saw forlorn faces around him. ‘We stood in the battlefield and lost, but the war will go on,’ he would say and restore his men’s hope in trying times.

He would often reminisce about his childhood and never forgot the humiliation his parents faced, the memories burned deep in his subconscious. Why did his father, so talented and learned, have to stand at a respectful distance with his head bent and shoulders bare before much lesser men who sat on their teak wood swings chewing paan, just because of his caste?

As a boy he wondered if he could some day stand before the sons of those men and sing a song of victory, head and shoulders high, fully clothed.

He did not know then that he was at the threshold of a new world, that he would fight against the fallacies of those times and claim the richness of his linguistic and cultural heritage as a Tamil.

These are excerpts from Karunanidhi: The Definitive Biography, written by Vaasanthi and published by Juggernaut Books in 2020. Republished here with permission from the publisher.
Vaasanthi is a well-known Tamil writer and columnist. Her other books in English include Cut-outs, Caste and Cine-stars: The World of Tamil Politics and Amma: Jayalalithaa’s journey from Movie Star to Political Queen.