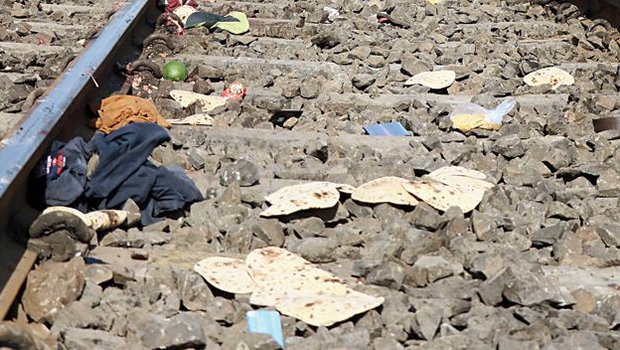 A bunch of jhulsa roties scattered over thickly layered ballast, bracketed by pairs of iron rail tracks and sleepers, bitterly mocked the apathy of some of us who rushed to our terraces the previous night, of Buddha Purnima, to appreciate the pockmarked beauty of the full moon. The image marked the acme of the sadistic drama so horrendously enacted in the theatre of macabre since the inauguration of the nationwide lockdown on 25th March, 2020. While the well-fed and the well-bred, got down to make the best use of the windfall staycation, for honing professional skills, fulfilling neglected hobbies, binge-watching movies, online series, televised epics or simply accepting or giving social media challenges, the tragic heroes of this tragi-comedy turned out to be the lakhs and lakhs of migrant workers who, left to their own wretched lot by everyone one can think of, set out Buddha-like on mahabhinishkramana (the great departure), however not away from but towards their homes in rural India. The visuals of the horrors inflicted on them as they trudged hundreds of kilometres along highways, fields, and canals, luggage and children in tow, under the blazing sun flooded our touch and television screens. Hearts of a few reached out to them, others complained about why on earth they are leaving and not following the norms of "social distancing", a horrible term we still don’t mind using. Scores of them died on road of starvation, dehydration, medical conditions and police brutality as our binge-watching among other absurdities went on. We ate, slept and mated as if nothing was amiss. Then, in the wee hours of a fateful morning, sixteen migrants, working ironically in an iron factory in Jalna and on their way to Bhusawal to catch the "shramik special" train, get run over by a goods train leaving behind images that promise to haunt the conscience of the nation for decades on end.

Questions about how and why they slept on the tracks gave away a couple of things about the kind of a society we’ve become. First, we don’t have the experiential resources or karuna to figure out what it would have taken for them to decide to sleep on tracks. Secondly, it exposes our intellectual poverty to construct a right kind of question or response to this heart-rending tragedy. Prior to them, it’s we who decided to walk away from the uncomfortable existential realities of a nation divided between India and Bharat. Prior to their fatigue-induced sleep, it’s we who decided to sleep in our cosy cocoons like dead. Our collective suicide is a necessary precondition to their tragic deaths. Umaria, a home that beckoned some of the deceased, is a district in Madhya Pradesh, known for its highest density of tiger population. It stands in shameful contrast to our fortified homes, we’ve so sheepishly confined ourselves in, scared stiff of a bloody virus. No wonder, in the game of tigers and sheep, retribution has finally caught up with us for our sins of omission and commission. How I wish it wouldn’t but the pitch-dark that pervades the poem is here to stay. This poem, one of the series on this theme, is an act of being a painful witness to a catastrophe that has smudged the line between the real and the surreal.

a clutch of lamps, spurred by goads,

trudge along the spine of black wicks

as they head for Umaria

blazing like a flame on a burnt wick breathing its last

beaming like tiger’s eyes behind the burning forests of dark

tracing their way from Umaria

look, how they lie flat on a winding bier

the gathering evening under heavy eyes

all of them lie on their sides, sleep tight,

dream of a crowd fast asleep on its side

dreaming of teeming sleeping crowds, on their sides,

it’s time to walk through eons

surge with muffled voices, locked with balls and chains,

rough hands to train, is all they have

greener than venom, blacker than black

let the monkey sleaze-dance in grandstand-

smell the pages of day and night,

pore over the trail of travelogue

be a black murderous cry to boot

soar and thread the horizons in noose

break the settled rhythm of the earth

fill my words stuck on tracks with passion of rubies

Hemang Desai is a bi-lingual poet working in Gujarati and English. His Gujarati translations of Arun Kolatkar’s Kala Ghoda Poems and Sarpa Satra are due for publication this year. He is presently translating eminent Gujarati dalit writer Dalpat Chauhan's fiction into English and finalising his first collection of Gujarati poems Metroma.