Campaign Statements
International Artists Call to End Israel’s Siege on Gaza
Over 400 artists, musicians, writers and cultural practitioners from across the world support Amnesty International’s call for an arms embargo on Israel.
May 18, 2020 Indian Campaign for Academic and Cultural Boycott of Israel 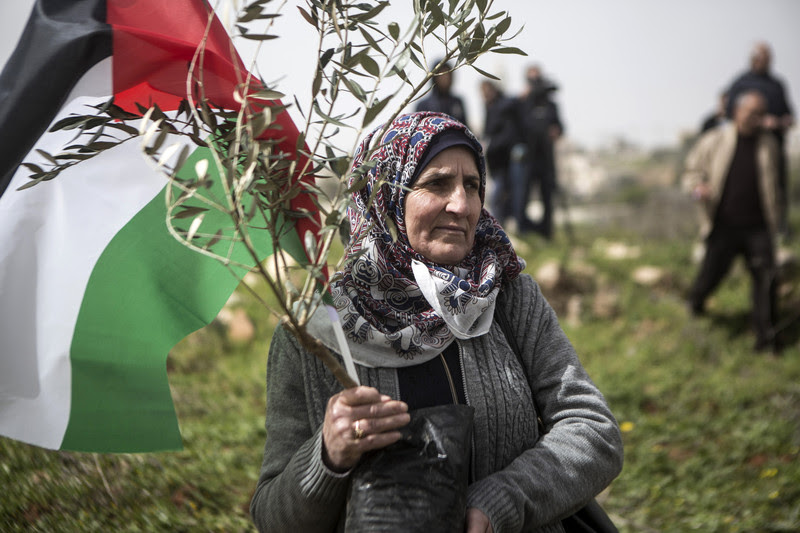 A Palestinian woman holds an olive tree during land day in the West Bank village of Qalandiya, March 30, 2019. 'Land Day' is held every year to commemorate the six Palestinian protesters who were killed by Israeli police and army during mass demonstrations on March 30, 1976, against governmental plans to confiscate Palestinian lands in the Galilee | Image courtesy : Electronic Intifada

Released marking two years since Israeli forces massacred sixty peaceful protesters at the Great Return March in Gaza, the letter has been signed by artists, musicians, writers and cultural practitioners from across the world.

The following is the text of the letter:

Long before the global outbreak of COVID-19 threatened to overwhelm the already devastated healthcare system in Gaza, the UN had predicted that the blockaded coastal strip would be unliveable by 2020. With the pandemic, Gaza’s almost two million inhabitants, predominantly refugees, face a mortal threat in the world’s largest open-air prison.

Two years ago on May 14th, Israeli snipers killed sixty Palestinian men, women and children in Gaza, with total impunity. The overwhelmingly peaceful Great March of Return weekly mass demonstrations, currently on hold due to the threat of coronavirus, were met with brutal violence.

Well before the ongoing crisis, Gaza’s hospitals were already stretched to breaking point through lack of essential resources denied by Israel’s siege. Its healthcare system could not cope with the thousands of gunshot wounds, leading to many amputations.

Yet Israel’s blockade impedes the flow of medical equipment, personnel and fundamental humanitarian aid. International pressure is urgently needed to make life in Gaza liveable and dignified. Israel’s siege must be ended. And most urgently, a potentially devastating outbreak must be prevented.

What happens in Gaza is a test for the conscience of humanity. We back Amnesty International’s call on all world governments to impose a military embargo on Israel until it fully complies with its obligations under international law. We recognise that the rights guaranteed to refugees by the Universal Declaration of Human Rights must be upheld for Palestinians as well.

In these times of international crisis, we must stand for justice, peace, freedom, and equal rights for all, regardless of identity or creed. We may be staying at home, but our ethical responsibility shouldn’t.

First published in Lift the Siege