Speaking Up
Humanity is Alive
May 7, 2020 Rashmi Oberoi

During these difficult times of COVID-19, the ordinary citizen has been most concerned about the poor living in the slum areas and our migrant workers. The pandemic has exacerbated their existing vulnerabilities and exposed the plight of their living conditions.

In this context, people from all walks of life have come together to promote, protect and fulfil the basic human rights of those women, men and children who are most marginalised.

It is heart-warming to cover stories that truly display empathy and solidarity with the underprivileged. One such story has been brought to my notice by an army friend and bespeaks of a massive humanitarian drive taking place in Noida/Ghaziabad – which have been identified as hotspots and containment areas.

The drive is taking place under the supervision of an army veteran, Colonel Amitabh Amit who is the Director of a security and management services company. In conversation with him, he mentions that he has never been actively involved in any social work other than donating for charity, most of it to Navratan Foundations, which was conceived by Ashok Srivastava in 2003 – a marketing honcho, who quit his corporate life to serve the community with a belief that ‘’ I will make the difference’’.

With Noida as his creative hub, he started by volunteering with several social organizations and slowly connected with the pulse of the city’s social issues.

When the present pandemic crisis became grave, Amit thought of assisting the poor with the limited means he had. The initial idea was to give some money every day to a reliable shopkeeper (bania) who would in turn give ration worth that amount to anyone coming to him without money. Amit approached Ashok Srivastava with this idea who liked it it immediately and said he would work towards involving more people.

He then went on to make a video with their novel idea in the difficult circumstances that everyone was going through and circulated it amongst friends. With an encouraging response, they decided to take it forward. The idea was still the same, i.e. cash assistance to those in need. He posted another video seeking support for this endeavour on March 25, 2020 and launched the operations on March 27, 2020. After due deliberations, they then decided to change the format with a decision to give a hamper to every family containing one week rations: 5 kg wheat, 1 kg Rice, ½ kg Pulses, ½ litre Oil, 2 kg Potatoes and some condiments.

The name given to this effort was 'WE CARE'. Initially there were three elements: Col Amitabh Amit (Retd) – the overall in charge on whose idea the entire effort started, Navratan Foundations – the NGO headed by Ashok Srivastava and the first team of volunteers from Shahid Bhagat Singh Sena which they called Team A led by Vinay Singh. 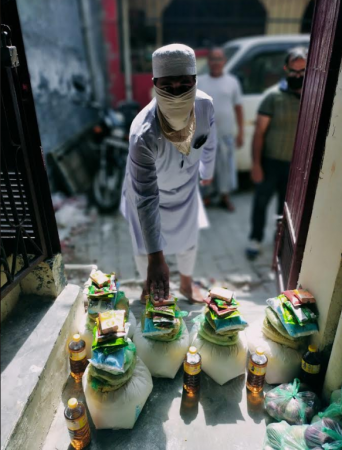 They initially started with Noida covering different slum areas which required their help. On April 5, 2020, they added another team comprising staff of Citadel Security & Management Services and other volunteers, Team B with Rizwan and Deswal as its leaders. The area of operation of this team was Garima Garden, in Sahibabad Dist. Ghaziabad.

On April 2, 2020 they achieved their first milestone of providing assistance to 1000 families – this was on the 7th day of operations. April 11, 2020 onwards, they started quantifying their efforts in number of meals for which ration was being provided. This was done as all other NGOs were quantifying in terms of meals. On April 11, 2020, they had distributed ration for 108,880 meals.

At this stage, Noida Authority decided to earmark areas to different NGOs for operations. Amit requested that they be allotted Radhakrishna Mandir, Prajapati Market and Machhli Market areas of Nithari. Team A accordingly restricted its operations to this area thereafter. On April 17,2020, they achieved the landmark of providing relief to 3000 families – this was the 22nd day of operation. On April 21 2020, they were allocated the area of Nithari as requested by them for relief work. They were the first and only NGO to have been given an exclusive area by Noida Authority and have been felicitated by them with a letter of appreciation, which is a rarity.

It is a simple USP that they follow: There are no operational costs and the entire amount contributed by donors is used for purchase of relief material. The entire operational cost is borne by Navratan Foundations. They have sound standard operating procedures in place. This genuine social work taking place in good stead needs to be highlighted.

Amit forwards a daily report and feedback at the end of the day to all the donors. He maintains all the documentation and records of recipients with Aadhar No and Mobile number. He involves all the donors in operations and suggestions and views are taken and incorporated if found suitable. There is complete transparency and involvement of all donors. They follow an independent feedback mechanism from recipients to monitor the work and suggestions to improve the services.

It is commendable that they have managed to go deep into the slum areas and by lanes of Nithari where no one else has ventured. Amit stresses on the fact that all safety precautions are followed that include social distancing, masks, gloves etc. All this is a true reflection of his army discipline.

Col. Amit has been in the process of thanking the donors and beneficiaries – he says it is imperative to make the beneficiaries feel good. Most of those helping the poor, make a show of it and end up making the beneficiary feel that a big favour is being done in giving them food. Difficult times may strike anyone and in any case the present situation is one in which we are all bound by the same circumstances. 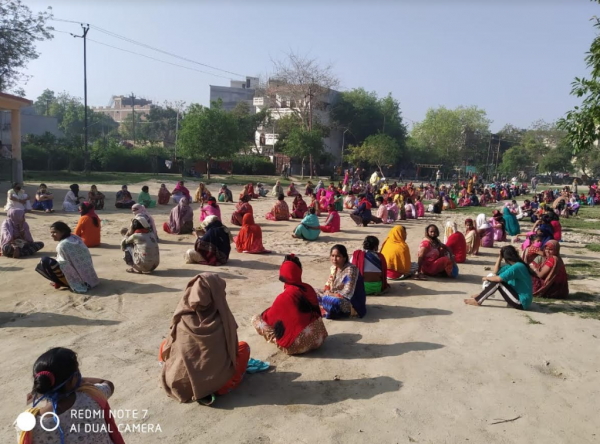 With the extension of the lockdown, Amit makes a fervent appeal for further monetary assistance from all those who can pitch in and help out till the lockdown ends and earnings begin.