Students and teachers struggle with e-learning amid lockdown in Kashmir

After authorities announced closure of schools in Kashmir in the wake of COVID-19 breakout, Anisa Samreen, a private school teacher in Srinagar, began preparing voluntarily for online teaching. Today, she teaches three classes with four sections daily with as many as 40 students in each section–despite the low-speed internet connection.

For Anisa, teaching online on the limited 2G network is by no means a cakewalk. “I was making videos, but it was taking a lot of time to get them uploaded and then again plenty of time for the students to download them,” she says. But, she continued her online classes while battling with network limitations.

The schools in Kashmir had opened after a gap of over six months after they were shut in August last year with the abrogation of Article 370 and bifurcation of Jammu and Kashmir into two union territories. In March, the schools were again closed down as part of the lockdown announcement to thwart the spread of global pandemic Covid-19. 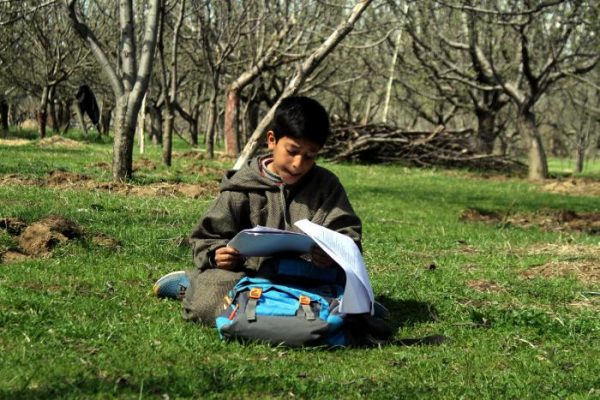 Lockdown is not new to Kashmir and students have been coping with remote learning from quite some time now. After abrogation of Article 370, students across Kashmir Valley attended community schools to compensate for the loss of their school days. But this time, community schools are no solution. A month has passed since the imposition of the latest shutdown and despite limited access to the internet, many students in the region are trying to learn as much as possible through online classes as teachers are trying hard to keep them busy.

Saima, who teaches at Srinagar’s Ellen Convent school, engages as many as 125 students from her school. “I send them e-papers, e-books, home assignments and other learning activities, even comic books,” Saima says. Other than limited internet, Saima has to tackle multiple other issues in the process of online teaching. “There is no way I can read whether my students are being attentive…it’s just a one way interaction, a monologue,” she says.

A student of the Department of Geography and Regional Development at the University of Kashmir says the voice of her teacher breaks so much in these online sessions that they spend most of the time guessing what their teacher is referring to. “We interrupted the teachers in the beginning and then it became so annoying that we realised it doesn’t make much difference either way,” the student says.

The coronavirus disease which has so far resulted in the death of over 2 lakh persons and affected over 30 lakh globally, was followed by an unprecedented worldwide lockdown which was enforced in Kashmir as well. The problem in the region, however, persisted not only due to the limited internet, but also because for many in rural areas of Kashmir, access to the internet or a smartphone is merely luxurious. 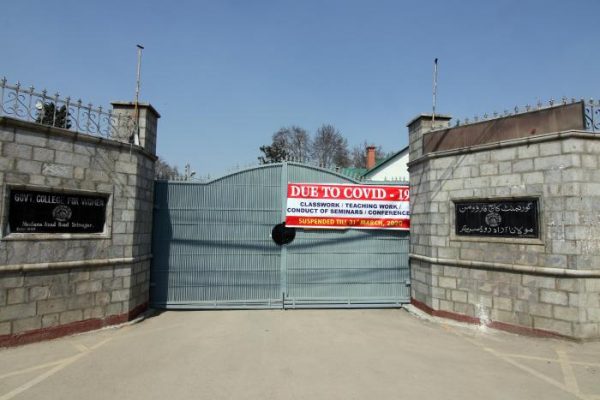 A school teacher at a government school in rural Budgam district says that most of the students in the rural area can hardly afford a smartphone due to which many students are not able to attend online classes. Since the lockdown, her digital classes on Zoom app begin at around 10 am and can extend upto 5 pm. “Only my video is open, the students have to compensate for speed by keeping their videos off. But they are still lucky, many others in these areas do not have access to the internet or smartphones,” she says.

What makes the situation even more complicated is teaching students from primaries especially when parents are not well-versed with the use of internet applications.

In one of the teacher-parents’ WastApp groups for Class 6, a teacher, after uploading a worksheet for the first time, had to explain the PDF format to the parents and ways to open it.

The students are expected to finish 35% of their syllabus by April 28 which completes the Unit II of their classwork. The students at government schools are required to attend 210 instruction days annually and hence, virtual classes remain the only option for them. A month after the lockdown, Director, School Education, Kashmir, Younis Malik says that they have collaborated with TV and radio broadcast networks to provide four hours for broadcast coaching. The DSEK plans to engage students with two hours on TV and two hours on radio in eight classes per day with each class of 30 minutes duration.

“We are already engaging students through digital networks and for those who do not have access to the internet we are teaching thorough radio and television media,” Malik told NewsClick. DSEK, through Doordarshan Kendra, Srinagar, has been airing two classes covering the syllabus of elementary and secondary classes since March 26 during which the students had to wait for days for follow-up classes.

Faced with an unprecedented situation, the administration and school authorities in Kashmir have been accused of complacency in their response. The online classes and remote teaching has thrown multiple challenges at educationists in the region and their response has been somewhat inconsistent. After it was flagged as unsafe, the use of Zoom app for digital classes became an issue for many teachers and parents. At Srinagar’s Green Valley School, almost all teachers declined to use the Zoom app for digital classes, but the school authorities responded by terminating about 20 teachers from the school. They were, however, reinstated later after everyone accepted to use the application.

The Private Schools’ Association Jammu and Kashmir, which has filed an affidavit in the Supreme Court against the internet restrictions in the region, vouched for the safety of Zoom app even as they claim a majority of schools are using platforms like Microsoft Teams, Skype, WhatsApp, FaceTime, and Google Meet.

“We have been receiving some complaints about Zoom but the company has updated its security and continued with our own few precautions, Zoom is a good platform for online classes,” President GN Var said in a statement earlier in April.

Stating that Zoom is a secure platform PSAJK asked all of its users to follow guidelines issued by the National Cyber Coordination Centre and use the platform without any worry.

But, Zoom or not, with the slow speed internet, limited tele-classes and lack of administrative cohesion, online classes in Kashmir are not helping all the students from the Valley.