Speaking Up
ASHAs: Fighting a pandemic with no protection
ASHA workers in Haryana’s Sonipat district have been pushed to the frontlines of the fight against Covid-19 in a later-than-last-minute attempt to control a pandemic – with no safety gear and very little training
April 22, 2020 Pallavi Prasad / PARI

“Now, we must visit at least 25 households every day, each house at least four times in a month,” Sunita Rani says, “to survey for the coronavirus.” She has been making these rounds for over 10 days, while Haryana’s tally of positive cases has been on the rise. That is over 180 confirmed cases and two deaths as of April 14, according to the state’s health department.

“People are scared of this disease. Many think it spreads through touch. They keep saying ‘social distancing’ in the media. Even after I explain what coronavirus is and how they need to stay apart, I don’t know how to look them in the eye,” Sunita says. “What is social distancing in a 10-foot by 10-foot house where seven people live together?”

Sunita, 39, is an Accredited Social Health Activist (ASHA) working in Nathupur village of Haryana’s Sonipat district. One of over 10 lakh ASHAs who connect India’s rural population to its public healthcare system. With Covid-19 becoming the biggest public health and social welfare crisis, her typically busy work day, which could include any of  over 60 tasks – from vaccinating newborns to taking care of expecting women, and advising them on family planning – has all turned topsy turvy.

On March 17, when Haryana reported its first Covid-19 case in Gurugram, ASHAs in Sonipat had not yet received any communication from their supervisors about the disease. Four days later, Sonipat saw its first case. There was still no word from their supervisors on new safety protocols, either to follow or to make villagers aware of. By the time Sunita and the 1,270 ASHAs in Sonipat were trained to be at the frontline, creating awareness against the deadly SARS-CoV-2 virus on April 2, the nationwide-lockdown was underway and the state had reported its first Covid-19 fatality.

In charge of roughly 1,000 people in her village, Sunita’s new responsibilities include creating a detailed record of each household within her ambit, the ages of all family members, whether anyone has returned from outside the country and the health status of those at higher-risk of contracting Covid-19 – such as patients with cancer, tuberculosis or heart ailments. “I check and make a note of who has influenza-like symptoms or [those of] coronavirus. All this is not hard. I am used to detailed record-keeping, but the circumstances have completely changed,” Sunita says. 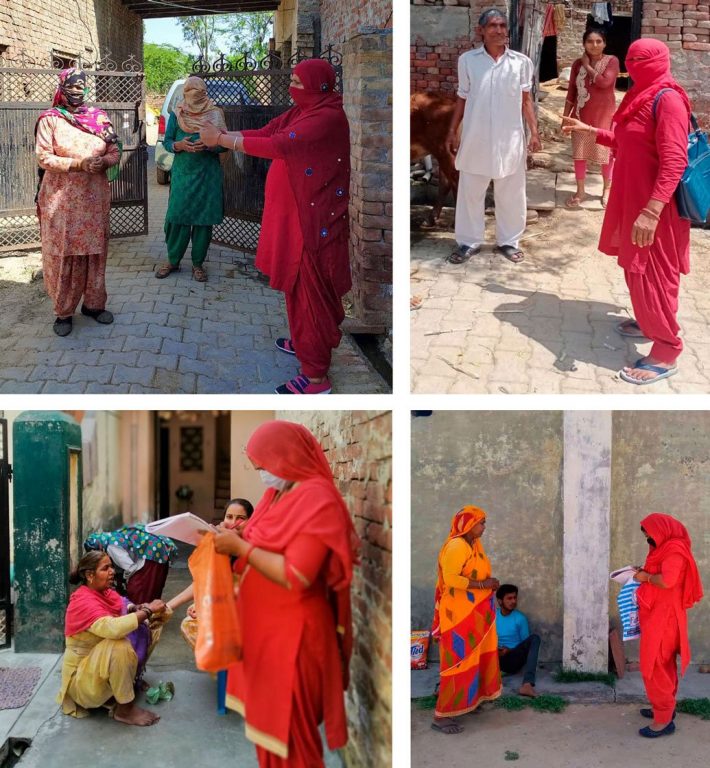 “We’ve been given no masks. When we were first trained on April 2 on coronavirus, we asked for safety equipment. We have basic education, we read the news. They gave us nothing: no masks, no hand sanitisers, no gloves. After we put our foot down, only some ASHAs got a cotton mask. The rest of us made them at home – for ourselves and even for people in the village who we think might be sick. All of us bought our own gloves.” Sunita adds.

Sending the ASHA workers door-to-door to conduct what is essentially preliminary detection for Covid-19, without any protective gear, is only part of official apathy. ASHA workers were trained for barely two hours – just once – on how to differentiate between symptoms of the new disease and influenza, or who could be at a higher risk of contracting the coronavirus. That too, seems to have been a later-than-last-minute attempt, pushing inadequately trained ASHAs out, without basic details on asymptomatic Covid-19 patients, or other possible signs to look out for.

Chhavi Kashyap, 39, an ASHA worker based in Sonipat’s Bahalgarh village, was also among those who didn’t get a mask. She was simply told to make one on her own. “I tried for a few days with a mask I made at home. But it wasn’t tight enough. I have two kids and my husband also works at a hospital,” she says. “I didn’t want to take the risk, so I used my chunni instead.” There’s a widely-shared video on the WhatsApp group of Haryana’s ASHA union on how to best tie a chunni around the face for complete protection, that she used as a tutorial.

After the ASHA union in Haryana wrote two letters to the state government asking for protection, some received 7 to 9 disposable masks against their promised quota of 10 and a travel-sized bottle of hand sanitiser on April 9, six days into their fieldwork.

Watch video: How to make a face mask from a chunni

Chhavi received nine one-time use masks – and was told to use each for three days at least. “How can they just push us in the face of a pandemic with nothing?” she asks. She reckons she’ll be back to using her chunni soon – a red, cotton one she washes in boiling water at least twice after every use. "The government says don’t go without a mask. We don’t have any. When we step out people abuse us,” Chhavi says. ASHA workers must report details of anyone with symptoms to their respective ANMs (auxiliary nurse-midwives), after which the police and healthcare workers from the nearest government hospital arrive, to ensure they are quarantined at home or at an official facility. “Then the family turns around and abuses us for ‘telling on them’. Those who are home quarantined often remove the sticker we put outside their house, and we have to keep putting it up and interacting with them,” Sunita says.

Isn’t she worried about catching the infection? She is. But in her dual role as an ASHA and union leader, other things are weighing on her mind. She was giving monthly birth control pills to at least 15 women. “Now with this lockdown, there isn’t any incoming stock,” she says. “The condoms have also finished, whatever work we did over the last few months will all go waste.” She seems certain that unplanned pregnancies will increase after this lockdown.

“Earlier the men used to go out for work. And we would get a small window to interact with the women who know us. Now all the men are at home when we go for the coronavirus survey. They ask us who we are to be posing all these questions. They ask us to show ID cards. The government refuses to recognise us and regularise our jobs. We’re just volunteers for them. Then, many men refuse to answer our questions,” says Sunita.

Many ASHAs started stitching masks after receiving just one for their fieldwork. When they finally received disposable masks, it were less than their quota and came with a travel-sized bottle of sanitiser | Image courtesy Pallavi Prasad / People's Archive of Rural India

On one of her daily rounds, women who knew and trusted her, came out to talk to her. “The first thing one of them asked me was whether I had any contraceptive pills. She told me ‘ab toh zaroorat badh gayi hai, didi. Voh ghar pe rehte hain’ [‘now the need has increased, sister. He is at home’]. I had nothing to say to her and apologised. By then, her husband came out and asked me to leave.”

ASHAs are expected to have a drug kit with basic medicines for headaches, body aches, fever and contraception, stocked on a need-basis. The kit has always existed only on paper, says Sunita – but the consequences of that lack are now more serious. “People can no longer go to the hospital or chemist for medicines in this lockdown. I go to their homes and I don’t even have one paracetamol to give someone with a fever… I can only ask people to rest it out. Pregnant women are not getting iron and calcium tablets. Most of them are anaemic. Without these, their deliveries will become more complicated,” she explains.

Chhavi has faced the same problem. On April 5, a 23-year-old pregnant woman under her care went into labour. One of her responsibilities – pre-Covid – was to take her to a government facility and ensure a smooth delivery. “The closest is Civil Hospital, about eight kilometres away. If I went with her, the police would allow us because it was an emergency. While returning, alone, if they caught me, I would get into trouble because then I wouldn’t be doing something ‘essential’. I don’t even have an ID to show.”  Chhavi tried to help the woman by arranging for an ambulance. None came and the husband finally arranged for an auto to take his wife to the hospital.

The police beat up two ASHAs with lathis in Gohana tehsil on March 30, she says – while enforcing the nationwide-lockdown – even though they pleaded that they had been summoned to the Community Health Centre for a meeting.

The stringent Covid-19 lockdown has also meant regular immunisation of infants has stopped, with no clarity on when it will resume. Pregnant women in rural areas, who often go to hospitals with ASHAs – over time, they call them bahu and didi – will end up having the baby at home. “This can go very wrong without guidance,” warns Sunita.

Pre-Covid, ASHAs in Haryana received a monthly stipend of Rs. 4,000 from the state government. And Rs. 2,000 from the central government as an incentive for five core tasks (one hospital delivery, an infant’s vaccination, ante-natal care, home-based post-natal care and family planning awareness). There were individual monetary incentives for other tasks like enabling tubectomies and vasectomies.

“All our tasks have stopped because of coronavirus and the lockdown. We are getting only Rs. 1,000 per month for three months to do this [coronavirus] survey. We’re losing around Rs. 2,500 [monthly]. On top of that I haven’t received any payments from October 2019 onwards. When will I get this paltry amount? How will we run our houses, feed our children?” asks Sunita.

On April 10, Haryana Chief Minister Manohar Lal Khattar doubled the salaries of frontline medical staff – doctors, nurses and health workers involved in battling Covid-19. But ASHA workers are deemed volunteers under the National Health Mission – and so stand excluded. “Are we not even considered workers?” asks Sunita. “The government is playing with our lives, the lives of the people, in the middle of this pandemic.” And with that, ends our conversation. Her husband is cooking rice for the first time. She is worried he will either burn himself or their dinner.

This article was originally published in People's Archive of Rural India on April 18, 2020.
Pallavi Prasad is a Mumbai-based independent journalist, a Young India Fellow and a graduate in English Literature from Lady Shri Ram College. She writes on gender, culture and health.