Speaking Up
Lockdown burden on little shoulders in Latur
With their parents out of work or at reduced wages, school students from distressed families in Marathwada's Latur are having to sell vegetables on the streets despite the risky Covid-19 lockdown scenario
April 13, 2020 Ira Deulgaonkar / PARI 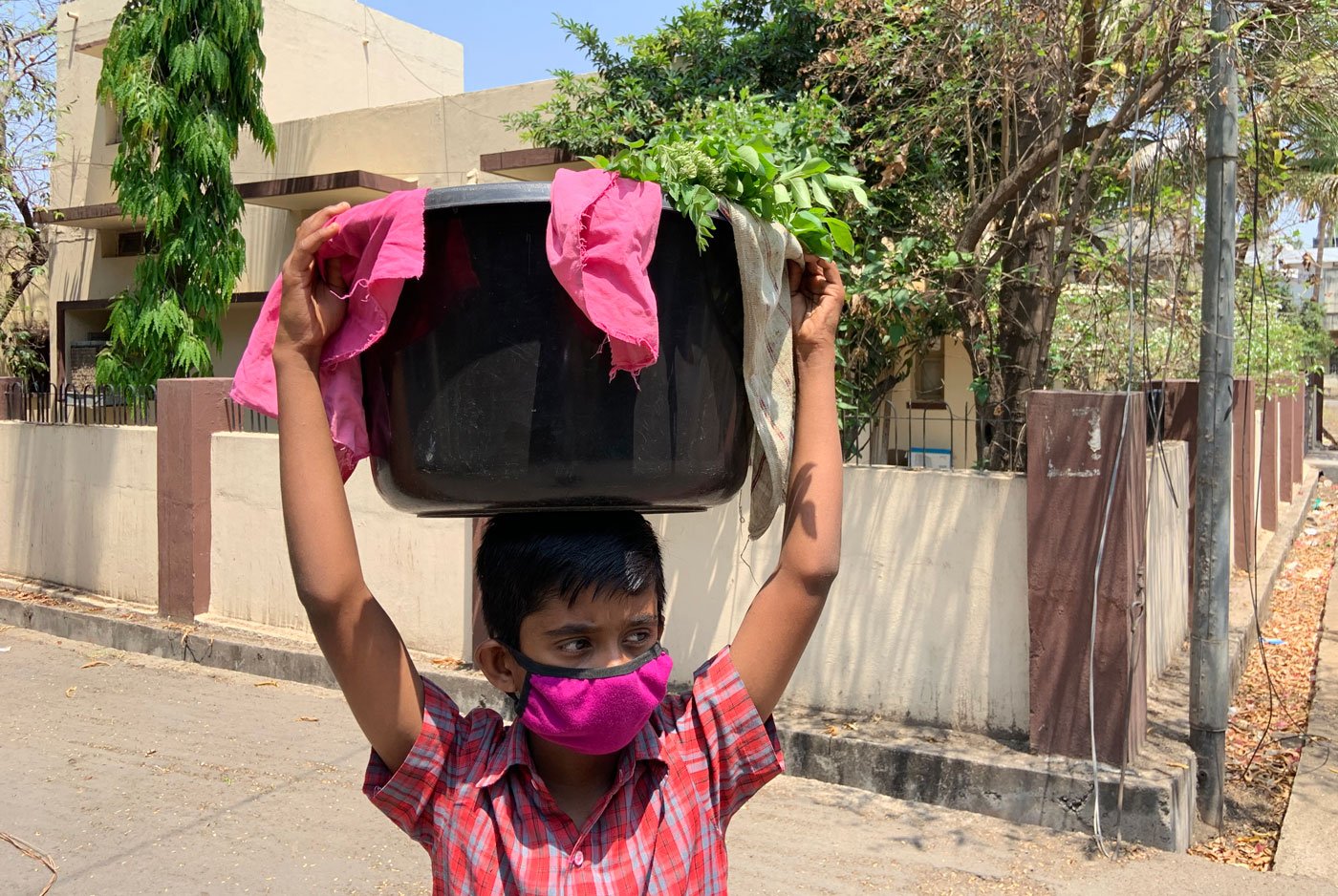 Paras Madikar reacted to the shutdown of his school in Latur city as quite a few 11-year-olds might. He was delighted that his Class 4 exams had been cancelled and looked forward to an extended vacation.

That didn’t happen. His father, Shrikant, 45, lost his job as a driver and had to take on the only one he could get – at a wage more than two-thirds lower than his last income. His mother Sarita, 35, also lost her job as a cook with the lockdown coming into force on March 25.

Paras spends the early part of the day carrying leafy vegetables on his head, to sell. Ironically, the two localities that the poor student services are called the Saraswati and Laxmi colonies (named after the goddesses of knowledge and wealth). His sister, Srushti, 12, covers Ram Nagar and Sitaram Nagar colonies, selling vegetables there.

“I can’t tell you what a terrible neck pain I have every evening! My mother gives me an oil massage with a warm cloth when I get home. So that next morning I can carry a load of produce again,” grumbles little Paras. Srushti’s problem is different: “My stomach hurts badly at around noon,” she says. “I drink nimbu paani before eating lunch – that gives me a little relief.” Neither child had ever done physical labour before the lockdown. Now they’re out there, in the worst possible circumstances, to earn a bit of bread, forget the butter. 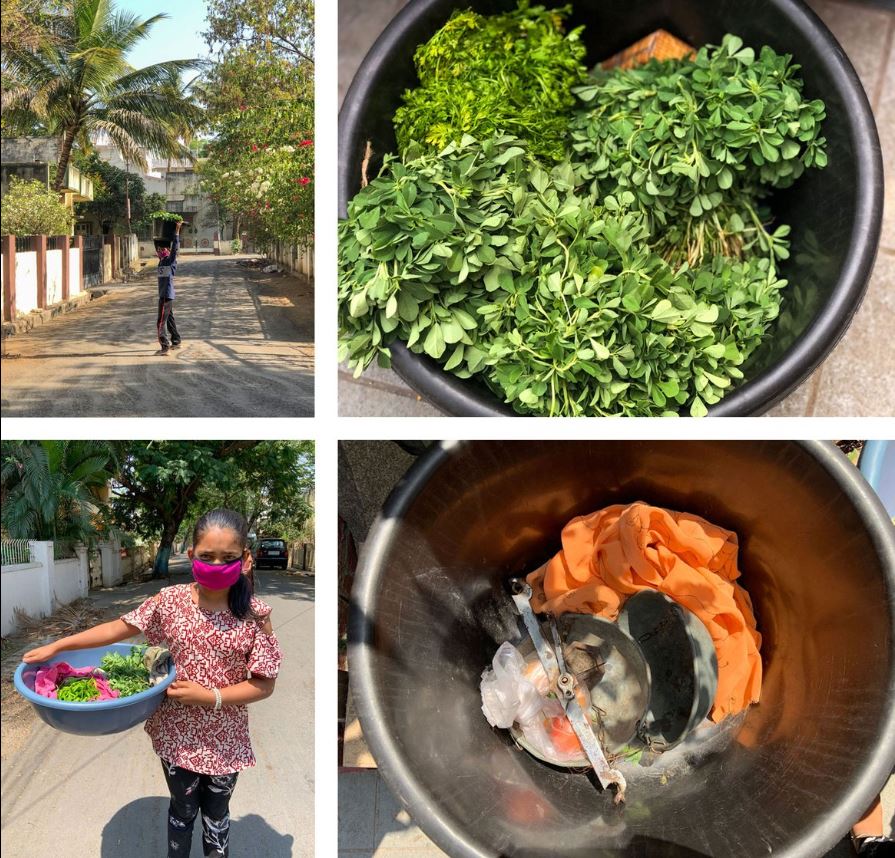 Top row: Paras Mardikar, 11, carries 4-5 kilos of vegetables on his head every morning to sell them in two colonies of Latur city. Bottom row: His sister Srusthi, 12, sells packed vegetable bundles on a different route, and carries a weighing scale and a 500-gram weight measure too. | Image courtesy Ira Deulgaonkar / People's Archive of Rural India

Since April 2, Paras and Srushti have been selling produce on their respective routes in Latur between 8 a.m. and 11 a.m. During this time, each will traverse about three kilometres with loads of 4-5 kilograms. Srushti’s is the more difficult, because she carries, in addition, a weighing balance that adds one kilogram to her load and one 500-gram weight measure. Paras carries produce that has been packed in bundles by their mother, and the price is fixed per bundle. In the hours they work, Latur’s average temperature rises from about 27 degrees Celsius to 30 degrees.

Where do they get the vegetables and other produce from? Well, Srushti’s work begins much before their 8 a.m. rounds. “Every morning, I go to Golai (Latur’s main vegetable market, five kilometres from their home) at 6 a.m.” She goes with her father or Govind Chavan, their 23-year old neighbour, currently studying for the state police exams. Either way, it is Govind’s scooter they use to get to Golai and back (he charges them nothing for the trips, not even for the petrol).  When they return with the produce, their mother packs their baskets or other containers.

“We don’t get to choose what to sell. We sell whatever our father or Govind bhaiyya arrange,” says Paras. “We bring back produce worth Rs. 350-400 [every day] in a jute sack,” explains Srushti. “But together we make [net] less than Rs. 100 at best.”

Their father Shrikant used to work as a driver earning Rs. 700-800 a day – and would get at least 20 days of work each month. While on duty, his food, too, was taken care of. All that ended with the lockdown. Shrikant now works as a watchman in Laxmi Colony on the Old Ausa Road, the same one where Paras plies his new trade. This job earns him just Rs. 5,000 a month – a fall of close to 70 per cent from his income as a driver.

The family also had to find a home nearer to Shrikant’s workplace as watchman – and shifted in the early days of the lockdown. But the rent is Rs. 2,500 a month – 50 per cent of his monthly income – while the earlier place they stayed in charged them Rs. 2,000.

Pre-lockdown, their mother Sarita worked in the local Sai Mess as a cook, taking home Rs. 5,000 a month. “My mother used to work there from 9 a.m. to 3 p.m. and 5 p.m. to 11 p.m. She used to cook for us before leaving home in the morning,” says Srushti. Now Sarita has no earnings and runs the home while also arranging the division of the produce for Paras and Srushti to take on their rounds.

Neither child ever imagined they would be doing this labour before the lockdown. Both have been diligent students. Paras averaged 95 per cent in his first term in Class 4 and Srushti scored 84 per cent in Class 5. “I want to be an IAS officer,” says Paras.  “I’d like to become a doctor,” says Srushti. In their school – the Chhatrapati Shivaji Primary School, a government-aided private institution – both were exempted from any fees.

As I spoke with Paras and Srushti, Doordarshan Archive was playing some old songs ‘to make quarantine days enjoyable for people’. The one that caught my attention was a song from the 1954 Hindi film Boot Polish:

If only that could happen for Srushti and Paras.

This article was originally published in People's Archive of Rural India on April 12, 2020.
Ira Deulgaonkar is a 2020 PARI intern; she is in the second year of a Bachelor’s degree course in Economics at the Symbiosis School of Economics, Pune.