No Result
View All Result
in Speaking Up, Videos 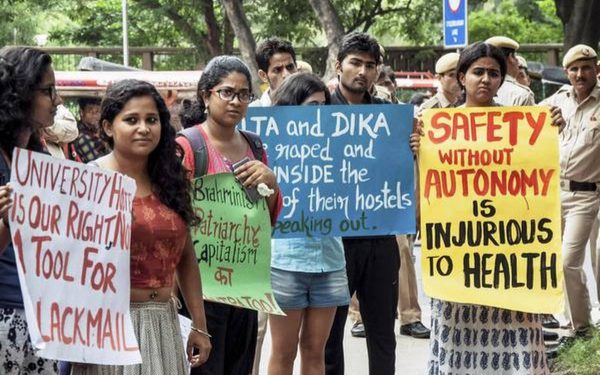 The residents of several girls hostels of the Delhi University have been on strike for 11 consecutive days demanding the abolition of curfew timings, transparency in allocation of hostel rooms and an affordable fee. Terming the hostels as demanding a “punitive fee for pursuing education”, the striking residents allege that the rules of the hostels have been drafted in a manner that penalises them for realising their dreams and even restricts them from acquiring skills for higher education.

Pallavi Raj, a student of Master of Arts in Political Sciences at the Faculty of Social Sciences, said that the rules and timings of different bodies under Delhi University contradict each other. She told NewsClick, “We have five hostels in the complex here in Mukherjee Nagar and the exit timings are different. While one hostel does not allow inmates to enter after 8 PM, others allow till 9 PM while another one allows only till 7:30 PM. Interestingly, the University has several libraries which are open till 11 in the night. How can students read till late particularly during examinations when hostel administrations wants you in by 8 or 9? What does it mean? Are these libraries built for boys only!”

Raj emphasised that the girl students, during re-admission, are constantly hounded for raising their voice for their rights. She said, “When I was admitted in the North East Hostel for Women, the administration demanded a Character Certificate from my previous hostel even when I had provided them another certificate. The administration is always keen in knowing that we will not protest during our stay. If they think any student has participated or may participate (in any protest in future), the names will be struck down from the admissions list.”

Another student Pooja Meena, a student of Law Faculty in Delhi University, said that the hostel rules are intrinsically designed to disempower girl students, and the students from the Scheduled Castes and Scheduled Tribes communities are worst affected amid this criminal apathy. Meena, who is a resident of Ambedkar Ganguly Student House for Women, said, “The most glaring aspect of this design is the fee charged from girl students. Normally, a resident of a Boys Hostel pays Rs 40,000 to 50,000 per annum whereas a girl resident has to pay anywhere from Rs 80,000 to Rs 1,50,000. We are unable to understand why this treatment is meted out to us.”

She further added, “Secondly, the hostel complex is dedicated to the students from the Scheduled Castes and Scheduled Tribes community but the administration never reveals how many rooms are available for occupation. The result is that many of the rooms remain unoccupied whereas the students are compelled to pay extraordinary charges to landlords who never leave a chance to fleece students.”

Atashi Banerjee, who is an undergaduate student of Political Sciences, complained that the girl students who wish to participate in debate competitions, which go on till late night, are either forced to abandon their plans or have stay at a friend’s place for which they may be penalised. She said, “This entire idea of providing safety is flawed because this system is snatching it indeed. Why can girls not participate in debating or other tournaments? The most depressing part is the students have always been discouraged to form a union. Now, when we have started protesting, the administration has rung our parents, complained to them about us and in turn we are being pressurised to abandon our dreams.”

Amid the protests, Amisha, a student of Law Faculty, said that the university and the hostel administrations are flouting directives by none other than University Grants Commission. She said, “I once asked a friend of mine regarding the entry and exit rules in a boys’ hostel. He sarcastically said he does not live in a girls’ hostel. I think this should explain the state of affairs…The culture of fear-mongering is such that no student can raise their voice even if they have basic issues regarding rooms or sanitation. A number of the students live in an University for 10 years. In these 10 years, the administration turns residents into submissive citizens. How horrifying is that. What we are demanding is completely legitimate and has been recommended by the Saksham Committee which was accepted by the University Grants Commission.”

UGC cautioned about over protectionism

The Sakhsham Committee report accepted by the University Grants Commission in 2015, while maintaining the need to provide a secure and safe environment to the girl students, had cautioned about over protectionism. The report stated, “While ensuring safety and access to a non-discriminatory or sexual harassment free environment, campus safety policies should not result in securitisation, over monitoring or policing or curtailing the freedom of movement, specially for women. The provision of safety for women on campuses must eschew the practice or tendency to be overly prescriptive to women by restricting their freedom of movement.”

It added, “Concern for the safety of all women, but particularly young women students should not lead to discriminatory rules for women in the hostels. The attitude to women’s safety in hostels often infantilises these adult women and does not empower them to learn to strategise about their own safety. Most importantly, the focus would have to shift to ensuring a safe environment around the hostel and campus. An urgent issue to address is safety for all women on campuses who want to sit in the library till late or in the science departments to do experiments. Proper lighting and shuttle buses that take students to the hostel or the nearest bus stop are necessary.”

The report concluded saying, “The mentality of “policing” as a panacea for deep prejudice only spawns alternative forms of violence and subjugation.”