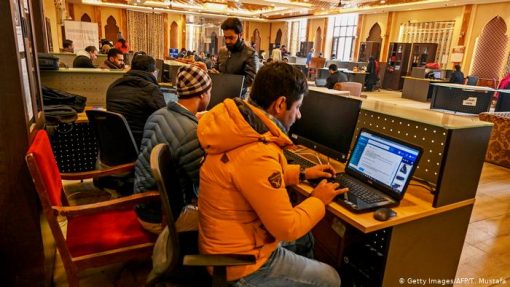 Srinagar: Low-speed internet and limited access to websites has led to people in Kashmir going for new ways to use Virtual Private Networks (VPNs) to circumvent the ban despite scores of VPNs being blocked on a regular basis by the government.

Sources in the J&K administration said discussions were going on about high-speed internet being restored in the region by the end of this week. The administration, however, continues to grapple with leakage due to increasing use of VPNs by Kashmiris.

The security agencies in the region had directed state-owned telecom network, BSNL, and private telecoms to create a firewall to stop the use of VPN technology but, a telecom official said there has not been a breakthrough so far. “It is not possible to ban the technology completely given the number of VPNs that are available online,” the official wishing anonymity said.

Another senior official in a telecom service provider told NewsClick there is “no update so far” on the restoration of broadband and firewall to tackle the use of VPNs.

“The FIR has been registered while taking cognizance of social media posts by miscreants by use of different VPNs. This is the first FIR registered in cyber police station since its notification by the government,” the police spokesperson said.

After the government enforced a clampdown on communication services, including internet services in the region, in the wake of abrogation of Article 370 on August 5, 2019, and subsequent bifurcation of the state, the government restored internet in a phased manner five months later.

In its January 14 order, however, the government banned access to all social media sites like Facebook, Twitter and other instant messaging platforms like WatsApp, Telegram and Signal. The ban, it claimed, was taken as a measure to stall “rumour mongering” and fake news that could lead to “social instability”.

An official also disclosed that the FIR registered against the social media users was aimed to discourage people from using social media platforms through VPNs in absence of the requisite firewall after the high-speed internet is restored.

Several VPN platforms which have been banned in the region have also claimed they are dealing with the issue. “At present VPN service has been blocked by the government, we are trying our best to resolve the issue,” a VPN service provider shared on Twitter.

Since the past week, the government in the region is also battling information regarding the health of ailing separatist leader Syed Ali Shah Geelani. Reports about health of the nanogenarian leader, who commands a massive sway in the Valley, led to a series of online miscommunication on his demise following which the government decided to disseminate a daily bulletin about his health.

Geelani is under house detention since a decade at his Hyderpora residence. Multiple videos and statements about the “funeral plan” and his “last will” published anonymously on social media platforms also resulted in a major stir in the security agencies. The J&K police is monitoring scores of social media users and has questioned many during the investigations about the statements regarding the Hurriyat leader.