Through his latest book, Sebastian & Sons: A Brief History of Mrdangam Makers, Karnatik musician T M Krishna documents the life histories of those legendary artisans and their families, who’ve involved themselves in the making of the the mridangam for years. Told through extensive ethnographic research, the work contributes to the author’s dedicated and continued exploration of how caste functions within the Karnatik music industry. Mridangam is the primary percussion instrument in Karnatik music but its makers, Sebastian and others, are hardly remembered or celebrated in history, because of their social position, most of them Dalit Christians.

On February 2 2020, Chennai’s Kalakshetra Foundation withdrew permission to hold the launch of the book, just some hours before it was scheduled to happen. In an official letter that was published the next day, the Foundation said that the decision was taken because the book touched upon “controversial issues” and made statements with “political overtones”. Ironically, this only reaffirms all that Krishna has been trying to say about the deep regressiveness that is characteristic of the Karnatik music industry.

Satyam Tiwari of the Indian Cultural Forum briefly spoke to T M Krishna about the book, the Kalakshetra incident, and more. 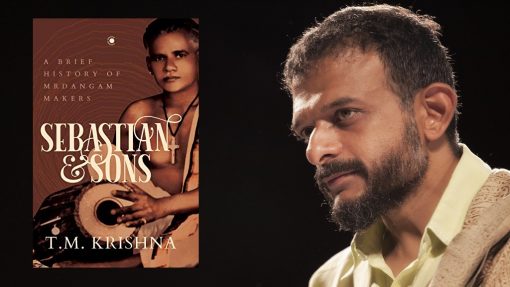 Satyam Tiwari (ST): TM, firstly, could you tell us about your latest title, Sebastian & Sons: A Brief History of Mrdangam Makers, and also about the Kalakshetra incident?

T M Krishna (TMK): Sebastian seems to be the the oldest full-time mrdangam maker I was able to trace. The term “sons” can be taken to mean only his biological descendants, but to me it refers to all makers irrespective of their geographical or social location. The title is also little subversion on the commonly used expression for family held private limited companies.

I do not have much to say about the Kalakshetra but just that they lost an opportunity to honour some incredible people (the mrdangam makers). It was their loss.

ST: Do you think that the cancellation of book launch was inspired by some instructions from the central government?

TMK: I cannot comment on this because I have as much information as you have on what transpired on the day Kalakshetra cancelled the hall booking.

ST: What do you, as an artist think about the government deciding what people should read or watch? Under this regime, we’ve been witnessing incessant bans on books, paintings, films, and more, from time to time.

TMK: This has been an habit of all Indian governments irrespective of the political party. Governments have always wanted to control people’s imagination and creative spirit. But we also know that the more they try to strangle honest seeking it further strengthens the urge to ask difficult questions and challenge all forms of status qua. Until the day when we have freedom of expression in its entirety we cannot call ourselves a democracy.

ST: What effect does these type of incidents have on you, professionally, personally and politically?

TMK: I have to say that all this constant fire fighting does affect your mental state and is emotionally draining. However, I will reiterate that I have all the privileges (gender, caste, economic and linguistic) to handle these pressures. We have to look out for those individuals who speak, write, sing, dance and act without any of these privileges and hence are most vulnerable. They are the real heroes.

ST: We saw how there was quite a crowd gathered for the launch of Sebastian & Sons in Kerala. Could you tell us about the experience and perhaps what the public thought about the book?

TMK: The launch was very emotional for me. To see so many makers from across gather and to be in on stage with them was moving. Many makers told me that this was the first time that they met their counter parts from various places and that it was so wonderful to meet and speak to them. I am also truly thankful to every person who came to the launch and to the many who wrote to me. Their act of solidarity is unforgettable.

T M Krishna is at the forefront of Karnatik music in India today and is known in the musical world as a classicist. His tremendous stage presence, great scholarship and ability to transcend cultural borders makes Krishna a great ambassador of Karnatik classical music. Besides performing, he is also involved with many organizations whose work is spread across the whole spectrum of Karnatik music, including research, archiving and documentation; taking Karnatik music to smaller towns and villages; conducting youth festivals; supporting artists from rural south India and spotting youth talent and giving them opportunities. Satyam Tiwari is a member of the Editorial Collective at the Indian Writers Forum.

Rohit De speaks on the right to dissent, constitutional resilience

Alaa Abd El-Fattah is not defeated

‘I Am Ready To Put On My Black Coat’: Lawyer Sudha Bharadwaj, Out On Bail After 3 Years In Jail