The Legend of Himal and Nagrai: Greatest Kashmiri Folk Tales is a collection of folk tales from Kashmir, collected and retold by anthropologist Onaiza Drabu. Memory and imagination of a group of people become extremely significant when its a group that is increasingly silenced by the rest of the society, making this collection all the more important to us in times like ours. Onaiza Drabu is part of a newsletter project Daak, which sends out near-forgotten folk literature from various parts of the subcontinent in the form of postcards, as an attempt to introduce people to the ideas that have been instrumental in shaping India’s heritage. Drabu, through this collection, asserts that Kashmir too is a vital part of what has gone into the making of all of us, lest its forgotten.

Republished here is an excerpt from the Introduction and the entire text of the short story Chalak Navid from the collection. 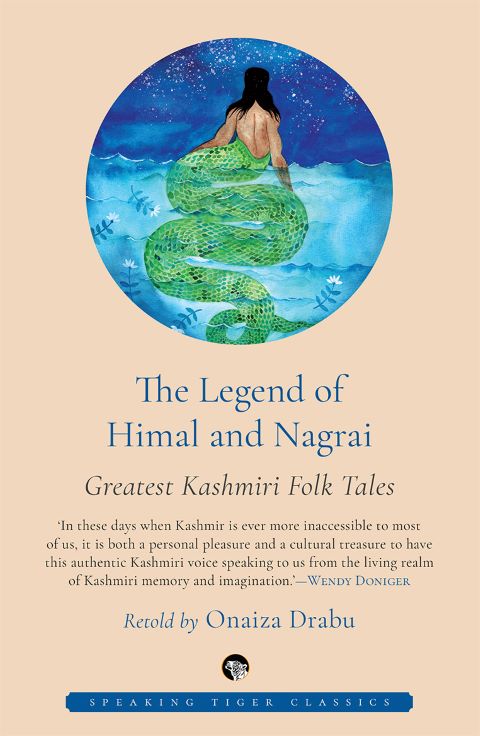 Ever since the complete communication blockade in the state from August 2019, it has become ever more important to document the stories of Kashmir and Kashmiris—their imagination, their speech acts and their culture. This book is retold in the hope that it contributes to more than a nostalgic sense of home; for it to have a purpose of upholding memory while fighting erasure.

We are who we are through the stories we are told and the stories we tell. I would be curious then, to know what our stories say about us Kashmiris. Kashmiris love their stories. Cut off from the rest of the world, in this multicultural, multilingual potpourri of customs and traditions, we have spun our own yarns to live by. We have legends to explain everything; moths here are spirits of the dead and each house has its own guardian angel. We have our very own creation myth. We even have origin stories for our most striking topographies. Our idioms have their own stories behind them, as do our proverbs. Our rituals are laden with superstitions. Our curses are graphic, and there is a vast list of un-translatable words, lacking counterparts in other languages, often making it painful to explain life to an outsider.

Kashmiri folklore, perhaps in a cruel twist of irony, tells us that as a race we sometimes enjoy the macabre; that evil sometimes triumphs; that men need to be afraid of beautiful women who may lure them to a brutal end; that women must constantly keep vigil against ogres; that luck is vital and pretty much nothing can change if you’re destined for misfortune.

Years ago, when I first came across a traveller’s account by Marco Polo on Kashmir it took me by surprise. I had just started collecting Kashmiri proverbs and folk tales, quite possibly as a way to reconnect with my childhood. To my pleasant surprise, I found this thirteenth-century man echoing what I heard in stories today. He had written that Kashmir was a province inhabited by a people who are ‘idolaters with a language of their own’. ‘They have,’ wrote Polo, ‘an astonishing acquaintance with the devilries of enchantment; insomuch that they make their idols to speak. They can also by their sorceries bring on changes of weather and produce darkness…. Indeed, this country is the very original source from which idolatry has spread abroad.’ Walter Lawrence, who wrote an elaborate document on the Vale of Kashmir, also made an interesting remark about the general nature of Kashmiris much in line with Polo’s observation. ‘[The] Kashmiri Sunnis are only Musalmans in name,’ he said. ‘The religion of Islam is too abstract to satisfy their superstitious cravings…. They like to gaze on the saint’s old clothes and turban and to examine the cave in which he spent his ascetic life.’ Our stories tell you our superstitions.

Lawrence partly attributes this to our artistic ability to exaggerate. He says of Kashmiris: ‘They are the people who can best be described by the idiom, “Raomut pula har, chaandan sheht mohur” (He has lost his grass shoes, and claims seven gold coins as compensation).’ How apt was this description for a group of people who live in fables, and talk in tales!

The stories from my childhood, told to me by elders as they fed me dinner from utensils that were family heirlooms, led me to the folklore of Kashmir. And now more than ever, the need to recall and retell these stories has a sense of urgency. The first sources I turned to for these stories were from within home and family. I had heard most of these tales from many sets of grandparents. Two decades later, I couldn’t recall all of them clearly. As I expanded my pool of research, asking others for alternative retellings of the same stories, I understood something I hadn’t before. Although my aim was to collect Kashmiri folk tales, I soon realized that these are not just stories. They are a part of life. Kashmiri folklore lives beyond its folk tales. It is alive in everyday rituals, in conversations and in instinct. While I would seek folk tales (lukh kath), I would inevitably be veered into conversations about folk belief (lukh pach). This folk belief is more palpable because specific tales escape most people, while almost everyone is able to talk at length about characters, guardians, ogres, saints, superstitions and food rituals particular to their homes. In these folk tales, there is a whole world of imagination that exists as a separate realm—one that exists solely in the world of oral Kashmiri, alive in the way Kashmiris speak, and familiar to a native of the language. To speak Kashmiri would be to accept and live with the folklore the language is enmeshed with.

Dapaan, there was once a barber whose mind was sharper than his sharpest razor. However, he was very poor. Poverty does not leave easily, it is said, and he knew he needed his luck to turn. For the barber, since the first day he heard the story he had known it would be the yacch that would change it. You see, he learnt the art of barbering from his father and there in the barber’s shop, men traded stories all day. As a child, he once heard the story of the yacch—the beast that can be captured by stealing its hat. It is said that once you capture a yacch and he is completely in your control, you can get it to do what your heart desires—he is your slave for as long as you hold his cap.

So the barber would wait and wait, on the night of the new moon. With a plate of lentils and rice as bait, he would stand behind the bushes, watching. Sometimes, he stood next to the windowsill. Another time, he disguised himself as a scarecrow and stood with arms wide open for as long as he could.

Now the barber was no fool, and after many tries he finally succeeded in stealing the yacch’s cap from behind, after having prepared a particularly delicious khyecher. The yacch was now his slave. The barber spent a long time lazing, gave up his coiffuring for commanding, and led a good life. He gained much prosperity and with it, complacency. With luxury came laxity and he, as many others do, forgot something very important. It is not only important to capture the yacch, for he is not a fool. He will find a way to get his cap back and as soon as he does, you lose all power over him. The barber forgot that the only place the cap would be safe was under a water pot or a mortar and pestle.

One day, on one of the barber’s travels away from home, the yacch saw a good opportunity to seize his freedom. He beseeched the barber’s mother to give him the cap back. He coaxed her, saying that she should take pity on him, that she and her son had enough luxuries already and did not need him anymore. The mother’s mind flickered and she said to herself: what can I lose by granting this poor beast his freedom? He has served us well all this while. She drew out his cap and handed it to him.

The evil yacch was free but he did not run. He used all his power to seek revenge. He had used all sorts of tricks to make the barber rich and he now flipped them to reduce him to rags. The barber, now glum, took up his razors again and returned to cutting hair and telling stories—this time of his own misfortune.

One day, on his way back from work, he ran into a dev who was on land. The dev tried to capture and eat him. The barber was a quick thinker and immediately took out a mirror from his bag and showed the dev his own reflection. Scared that he might capture him and put him in his box like he did the other dev, he pleaded to not kill him. He even gave him his many rings of gold and jewellery before he dashed off.

When the barber got home, he showed off his new riches to his mother. Soon word got to the neighbours, and what one does know of envy: it tastes like raw oil, sour in one’s mouth. They accused him of theft and wanted to know how he had got such wealth. When he told them the tale of the dev, they refused to believe it. After much coaxing, he agreed to show one of them, a friend of his.

The barber led him to the place where the devs emerged, next to a naag, and asked him to wait. The friend grudgingly climbed up the tree with the barber. They waited for the devs to ascend from the naag and lay out a feast, displaying their riches to one another and growling in pleasure. Hearing the growl the friend shuddered, slipped and fell to the ground with a thud. The dev, the one who had met the barber only a few days ago, looked up, recognized him and told his friends to run! He thought he was there with a companion to trap them. Hurriedly they descended back into the naag and left the scattered booty for the two humans to distribute amongst themselves.

This is an excerpt from the collection The Legend of Himal and Nagrai: Greatest Kashmiri Folk Tales retold by Onaiza Drabu and published by Speaking Tiger Books in 2019. Republished here with permission from the publisher.
Onaiza Drabu is a Kashmiri anthropologist. She writes about identity, nationalism and Islamophobia, and co-curates a newsletter, Daak, on South Asian literature and art. This is her first book.