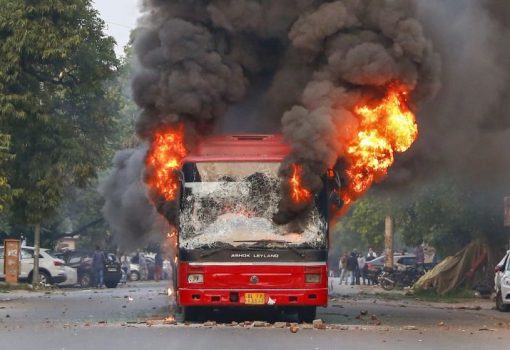 New Delhi: The protests against the Citizenship Amendment Act (CAA) in Jamia Nagar and neighbouring areas in the national capital turned violent after a standoff between the protesters and the Delhi Police escalated on Sunday evening. While the Jamia students distanced themselves from the violence, the area turned into a virtual war zone after the police entered the campus, baton-charging the students and firing tear gas, even in the reading room area.

Latest reports suggested that at least two Delhi Transport Corporation buses were set on fire by unidentified persons. The disturbing visuals flooding on the social media clearly suggested an unprecedented use of brute force by the Delhi Police on the residents of the area as well as the students of the Jamia Milia Islamia. Innumerable vidoes on social media showed badly injured students, crying for help. Around 50-100 students were also reportedly detained by the police.

According to an eyewitness, the entire chaos ensued soon after the protestor march against the discriminatory CAA was stopped near Mata Ka Mandir lane in the area. Talking to NewsClick, the eyewitness, who wished to remain anonymous, said: “the residents had planned a protest to oppose the Citizens Amendment Act by blocking the national highway at Mathura Road intersection. However, they were stopped first near Mata Ka Mandir Lane. The police started indiscriminate lathicharge on the protesters. First, they were chased down to Juleina. Soon, we noticed that the police entered the campus and started firing teargas shells. The students who were studying in the library got stranded but what was shocking that the police fired tear gas shells inside the library which eventually led to a suffocating situation. My friend is injured and he is bleeding profusely. We have just rushed him to the nearest hospital. This is appalling.”

Another student told Newsclick that the intensity of the firing of teargas shells could be gauged from the fact that even the Imam of Jamia Masjid had to appeal to the police through loudspeaker to stop the firing. “This has never been seen in the campus. Even the students had to take shelter in the mosque,” the eyewitness said.

Reacting to the violence inside the campus, Waseem Ahmed Khan, Chief Proctor, Jamia Millia Islamia, said, “Police have entered the campus by force, no permission was given. Our staff and students are being beaten up and forced to leave the campus.”

The university has postponed the examinations and closed the campus till January 6, 2020. In a press communique, the university said, “All exams have been postponed. New dates to be announced in due course of time. Winter vacation declared from 16th December 2019 to 5th January 2020. University to open on 6th January 2020.”

Nadeem Khan who runs United Against Hate told NewsClick that several students have been rescued by the local residents. He said,” The students were lying unconscious on the floors of the library and other wings of the university. They have been rushed to the different hospitals in the area. The numbers of the injured students is still not known but hundreds of students have sustained injuries.”

Local residents said that at least 150 students were still trapped inside the hostel while 50 students have been detained by the police.They added that the casualty ward of the Al Shifa Hospital in the area was crammed with the injured students. However, the students are still coming to seek medical attention and care. There were also unconfirmed reports of pellet guns being used.

Meanwhile, the students and teachers of Jamia distanced themselves from the violence that ensued after their peaceful protest and blaming the violence on miscreants.

In a tweet, Delhi Deputy Chief Minister Manish Sisodia also questioned the turn of events and the role of the police, and called for an impartial enquiry into the violence that led to burning of buses and rioting. Incidentally, the Delhi Police falls under the jurisdiction of the Union Home Ministry.

This is a developing story. We will continue updating it.

(With inputs from Tarique Anwar)