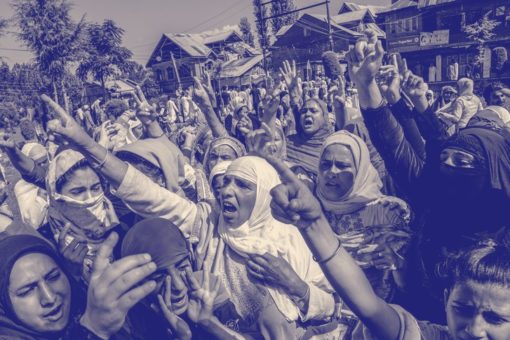 Srinagar: Four months since Jammu & Kashmir has been under lockdown after abrogation of Article 370 on August 5, tension in the Valley continues to surge as people battle with the ongoing crisis, braving daily violence amid freezing temperatures.

As government eased restrictions of movement in the region, a partial shutdown continues to be in place with most shops and business establishments observing a civilian shutdown since four months against the government’s unilateral move to bifurcate the state into two Union territories.

In Srinagar, police arrested five persons on Wednesday who they believe were involved in using Molotov cocktails to (explosive device) threaten and dissuade shopkeepers from resuming work in parts of city especially in area of downtown’s Bohri Kadal, Rajouri Kadal, Khanyar and Nowhatta.

In the past month, scores of shops across the Valley in Baramulla, Anantnag and Srinagar have been set ablaze by unidentified persons, which the police believes, is aimed to deter shop owners from resuming their business.

On Sunday night, some shops inside Lambert Lane at Srinagar’s city centre, Lal Chowk, were sprinkled with petrol. However, locals were successful in averting a fire incident. A similar incident was also reported in the central market of Jamia in Nowhatta where few shops were sprinkled with an inflammable liquid as a ‘warning’ to avoid violating the shutdown deadline.

Shops in Srinagar usually open in the morning hours and till 1 p.m. Previously, the shops would remain open between 8 a.m and 11 a.m. The change in timings happened after winter set in the region, resulting in cold mornings.

A committee of traders in Lal Chowk, according to a shopkeeper, has decided that shops will close their business by 1 p.m as a result of the continuing shutdown. The traders say they have no specifics as to how long the decision to observe the shutdown will remain in place.

As the government abrogated Article 370 on August 5, hundreds of people were arrested across the region in what the government termed as a measure of “preventive detentions” to stop any protests against the move. Among the arrested are politicians, civil society activists and trade leaders. Many shop owners claimed the shutdown would continue as long as the trade leaders were not released.

Petrol and Molotov cocktails were used in Kashmir during the unrest of 2010 and 2016 as well, but its use remains limited to sporadic instances. This time, however, the security establishment is apprehensive that such attacks may increase. “We are taking precautions and have already arrested those involved in carrying out the attacks,” a security official said.

In view of the incidents, police and Central Reserve Police Force have increased security in areas where such attacks have been carried out and have also increased security cover of major markets and shopping centres across the Valley.

Traders body, Kashmir Chamber of Commerce and Industries (KCCI), has estimated economic losses worth over Rs 12,000 crore since August 5. Restrictions and shutdown have affected hundreds of thousands of shop owners in the region and in the continued absence of internet services in Kashmir, businesses continue to suffer losses.