The proponent of “yoga” and peddler of soaps, noodles and gaumutra has once again put his foot in his bearded mouth and we have managed to take him to task for it. The remarkable rise of this contortionist is a study in the gullibility of the Indian middle class and the inferiority complex of a nation trying to forget itself under delusions of grandeur.

While his claims of taking on multinational conglomerates seem to be somewhat true, the means adopted do not seem to be fair. Multinationals, of course, are no paragons of virtue or fair play and do not deserve any sympathy. An example is Maggi noodles of Nestle which was almost driven out by a sustained campaign on its health hazards, only to be replaced by his brand which, however, does not seem to be thriving.

The classic gimmick of calling things “ayurvedic”, “swadeshi” or “yogic”, along with his contortions and diatribes aimed at the lowest common denominator of Hindu sentiment, is enough to entice the middle class with its inferiority complex, bulging paunches, falling hair and a slew of lifestyle disorders. Though rational solutions do exist to control, if not to cure these, the easy ones offered by the so called baba are very attractive! Through a few contortions, a number of heavy breaths and consumption of some his concoctions all these problems are promised to be easily solved. The so called “yoga camps” are steeped in such gratuitous free-flowing advice about everything under the sun, moon and stars. The attendees, with their bulging paunches and receding hairlines, sweat a bit, get a boost for their desi egos and go home. When they discover after a few days that neither has the paunch reduced, nor has the hair grown back, and the parameters of lifestyle diseases have kept getting worse because they opted to stop conventional treatment, they go back to the old pills and potions prescribed by their regular medical service providers!

Well recently in Udupi, near Mangalore, which is the mother root of the tree of Hindutva, and where the famous Krishna Temple, started by Madhvacharya, is located, a “yoga camp” had been organised. While singing praises of the wisdom of ancient Indian traditions, he also grandly announced that leaves of tulsi (ocimum sanctum) or basil can protect against radiation emitted by cell phones. To demonstrate, he called a member of the audience and bent his arm before and after the exercise of protecting him against radiation of the cell phone with a single tulsi leaf. This was greeted with huge applause by the thousands in attendance, who had gathered there for a bout of yoga, followed by spiritual enlightenment. When the news went viral we thought that the stupidity of this statement should be exposed. The media was summoned for a demonstration in which the radiation was tried to be blocked using a heap of tulsi leaves under which the phone was almost buried. A call to the number caused the phone to ring which showed obviously that the radiation was not being blocked at all. Next, the phone was covered tightly in a sheet of aluminum foil and a call was placed to the phone again. Though the mobile was right in front of the observers and in the same place as before, the call could not be placed as the phone was said to be out of coverage. Unwrapping the foil just a little bit brought it under network coverage again, thus demonstrating what the real meaning of blocking the radiations was! 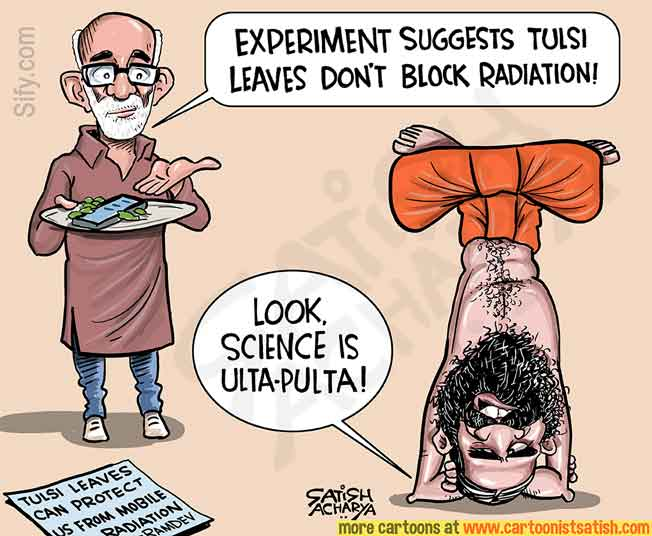 He was asked to explain how this was. His only rejoinder was that some people are allergic to anything to do with gaumutra, tulsi and our ancient traditions, as if our ancestors were going about lugging smartphones with tulsi leaves to protect them from radiation! Taking a closer look at this issue reveals the blatant hypocrisy of this man and his minions. While they want the latest amenities and fruits of modern science, they bring up the wisdom of ancient traditions and the greatness of vedas in every second sentence. Anyone who questions them is labelled as anti-national and anti-Hindu. When a local TV channel invited him or his minions for a debate, no one turned up stating that whatever was to be said had already been said by their boss.

Also read | The Claimants of Supernatural Powers in Rural India

There are two aspects to “blocking cell phone radiation”. First, from the tower and second, from the instrument to the tower. Both operate at different wavelengths. If either one were to be blocked, the cell phone would not work. In case of a partial blockage, the cell phone would register a low signal and emit more radiation to keep the phone working. This is precisely what the experts warn against. In fact, the Federal Trade Commission (FTC) of the United States of America has specifically banned any device that claimed to do that. Quoting from that:

While health studies about any relationship between the emissions from cell phones and health problems are ongoing, recent reports from the World Health Organization will no doubt convince scam artists that there’s a fast buck to be made. Scam artists follow the headlines to promote products that play off the news – and prey on concerned people.

If you’re looking for ways to limit your exposure to the electromagnetic emissions from your cell phone, know that, according to the FTC, there is no scientific proof that so-called shields significantly reduce exposure from these electromagnetic emissions. In fact, products that block only the earpiece – or another small portion of the phone – are totally ineffective because the entire phone emits electromagnetic waves. What’s more, these shields may interfere with the phone’s signal, cause it to draw even more power to communicate with the base station, and possibly emit more radiation.

Again some sprang to the rescue of their guru by quoting publications as proof that aqueous extract of ocimum sanctum can allegedly protect animals against radiation damage and when refuted fell silent. It was clear that neither they, nor their guru, knew anything about radiation, because radiation used for radiotherapy are of a different wavelength and are ionising radiations, while those of the frequencies used by cell phones are non ionising and in the microwave range. We have also put forth a suggestion that if tulsi leaves could block mobile radiation, why not use them to block signals for prisons and VIP escorts.

In the meantime, both the guru and his shishyas have stopped talking about the issue. But one can be sure that the next Patanjali product to hit the market would be a cell phone radiation protector device or concoction!

Narendra Nayak is a notable rationalist from Mangalore. He is the president of the Federation of Indian Rationalist Associations, and the founder-secretary of the Dakshina Kannada Rationalist Association. He tours the country conducting workshops to promote scientific temper and showing people how to debunk godmen and frauds.
Disclaimer: The views expressed in this article are the writer's own, and do not necessarily represent the views of the Indian Writers' Forum.