Stay alive
be in full bloom
be the inevitable passport photo
stay awake in every line
like an unquenchable thirst
yes, you, my pain,
the pain that tears my heart apart
be in full bloom
do not hide from me
so long as I breathe in poetry

(“In Poetry” by Nabaneeta Dev Sen) 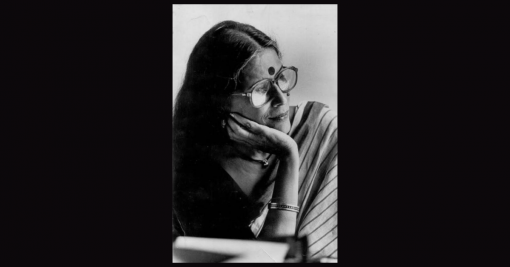 Acclaimed Bengali writer, litterateur and academician Nabaneeta Dev Sen (81) passed away yesterday evening at her South Kolkata home. She will be remembered for nearly  five decades of legendary literary contribution through poetry, novels, short stories, plays and more, including literature for children. This is apart from her life as a radical academician. She worked extensively on the Ramayana from a progressive-feminist perspective, finally retelling the epic in English through Sita’s eyes. She had retired from her  faculty position teaching Comparative Literature at Kolkata’s Jadavpur University. An author of more than 80 books in Bangla alone and the winner of both the Sahitya Akademi award (in 1999) and the Padma Shri (in 2000), Dev Sen passed after a long battle with cancer, with her health deteriorating terribly towards a multiple organ failure by yesterday. “Pratham Pratyay”, published as early as 1959, was her first collection of Bangla poetry.

Dev Sen grew up being a witness to many tumultuous landmarks in Bengal’s and the world’s history, including World War II, the famine of 1946, the Calcutta riots, Partition etc – all of which left a powerful imprint on both her life and writings. She was one of the many women who shaped post colonial Bengali literature in remarkable ways.

Born into a family of poets and “strong women”, at the centre of most of her work is the feminine experience. Throughout her career, Dev Sen did not remain enveloped only in her literary and academic world, but fearlessly established her stands in public against societal injustices. She was the founding president of Soi, an association for female writers and other creative women in West Bengal. In November 2017, Dev Sen wrote on their website that “Those of us who happen to write, we know, our appeal, our written words, our poems and articles can reach only a handful of educated Indians. But we also know that it is in our hands, the privileged minority, that the future of the rest of us in the huge and confused subcontinent is helplessly chained… But there is always a tomorrow. We are tomorrow’s people, the creative woman of the world… Soi belongs to them, Soi belongs to tomorrow. And it is our aim to build a better tomorrow for all of us, through creative art.”

Her first novel “Ami Anupam” (1976) is set in the times of the Naxalite movement in Bengal. First published in Sharadiya Ananda Bazaar, it was translated into English this year as “I, Anupam”.

Memories about the writer have been pouring in from around the world since herdeath. Poet K Satchidanandan wrote to the Indian Cultural Forum about her:

“Nabaneeta Dev Sen will be remembered as a pioneer of feminist thinking in India, a Ramayana Sholar who read the epic from Sita’s point of view, a poet of the city who went on asking disturbing questions, a fiction writer of repute, a fascinating memoirist and one of the founders of Comparative Literature as a proper discipline in Indian university education. To me she was a wonderfully warm friend and fellow-writer and a second mother to my daughter Sabitha. We will badly miss her wisdom, affection and humour.”

“Nabaneeta had the kind of energy that lit up everything she said and wrote and did. She was sharp, witty, bold — and great fun. We will miss her sense of humour, her uncompromising support of women’s equality, and of liberal values in general.”

“Nabaneeta and I belonged to the same generation; in fact we were born in the same year. I first met her during a conference in Dhvanyaloka in Mysore (on writing by women) where I listened to her fiery speech in which she boldly countered all that the organiser, the highly respected C D Narasimhiah had said about women, denouncing the continued use of the Sita Savitri image. These were my thoughts as well, though I would never have dared to speak the way she did. It was with her that I discovered how many women there were in the different languages who were slowly cutting away at the old ideas of women. Of the many and varied voices, Nabaneeta’s was one of the strongest.  Translations into English from the regional languages were not many then, and I could not read much of Nabaneeta’s work. But when I met her later, mainly during conferences and seminars, both in India and abroad, I realised the strength of her beliefs. I remember that we were together on a panel in Munich and were discussing (what else?) women, and I contradicted Nabaneeta when she spoke of the trauma of divorce. “What do you know about divorce?”, she asked me. “You have not been divorced”. Everyone, including me, burst out laughing.

I last met her in Calcutta when I was given the Soi Sanmaan, an award instituted by a group of Bengali women writers. The award was presented to me by Mahashweta Devi and Nabaneeta; it remains one of my most prized awards, even more because Nabaneeta was very happy that I received the award. I saw Nabaneeta then, vigorous and active, the pillar of the group, the centre of all the women working with her. Her easy  laughter, her affection for others gave me a glimpse of a woman in whom the intellect and emotions were combined to a rare degree.

Nabaneeta was a pioneer, opening the eyes of the world to what women really were, and how different from what they were supposed and desired to be. Now  there are many writers following the same path. Nevertheless Nabaneeta will be sorely missed. But like Tennyson says “The old order changeth yielding place to the new”.

Yes, our generation is on the way out, Nabaneeta has done her work and has gone. But the work never ceases. It will go on. I am sure she would be happy with that thought.”

Dev Sen is survived by her two daughters, of whom she has spoken at various places as her strong and independent female company, journalist Antara Dev Sen and actress Nandana Sen.