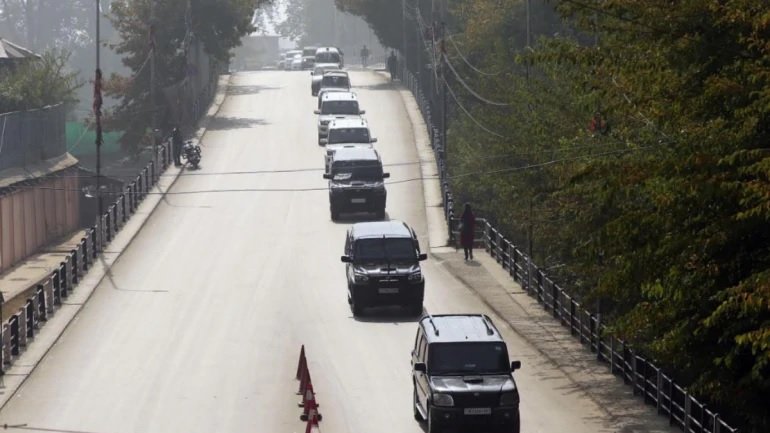 Protests erupted in several parts of Kashmir on Tuesday as the first international delegation of European Union (EU) parliamentarians, most of them Right Far Right-wing groups, was scheduled to visit the capital city of Srinagar to “assess the ground” situation after the Centre abrogated Article 370 on August 5.

There was a complete shutdown in Srinagar, while incidents of stone-pelting were reported in parts of Valley, including in civil lines areas of Chanapora, Rambagh, Natipora and in old city areas of Downtown Srinagar like Habba Kadal, Nowhatta, Idgah and other places.

Scores of youth clashed with police and security personnel following which police used tear-gas canisters to disperse them. The security personnel also used pellet guns at demonstrators in Hawal area of Downtown in which at least six youth were reportedly injured.

The protesters also reportedly attacked several private vehicles in parts of Srinagar, damaging cars and their window-panes to thwart their movement.

Meanwhile, as the delegation met in Srinagar, there were reports of suspected militants attacking a patrolling CRPF unit in Drobgam village of Pulwama in South Kashmir following which an encounter ensued in the area.

Tuesday’s protests come in the wake of the visit by 27 EU parliamentarians to Kashmir at a time when a severe clampdown has been put in place by the authorities since August 5, when the government unilaterally revoked Article 370 and 35 A and bifurcated the erstwhile state of Jammu and Kashmir into two union territories, officially being implemented from November 1.

The parliamentarians arrived at Srinagar airport at noon reportedly on a ‘private’ visit and were escorted by a convoy of security vehicles in bullet-proof jeeps.

The delegation later had lunch inside the Badami Bagh cantonment of 15 Corps of the Indian Army. The parliamentarians, whose visit was organised by an Europe based NGO, met a few local delegations at around 4:45 p.m at a five-star hotel in Srinagar’s Gupkar area.

The delegations comprised Panches and Sarpanches from the panchayat committees from Uri and Pattan area of Baramulla district.

After their meeting at the hotel the delegation went for Shikara rides on Dal lake at around 5:30 pm.

The visiting members, however, also expressed their displeasure following the meeting at hotel.

“We are conscious of the fact that we are kept away from people,” a member from the delegation Hermann Tertsch told reporters.

According to an official statement, the delegation is on a two-day ‘private’ visit to Kashmir “for better understanding of the cultural and religions diversity of Jammu, Kashmir and Ladakh apart from giving them a clear view of the development and for governance priorities of the region.” Incidentally, the MPs met Prime Minister Narendra Modi and National Security Adviser Ajit Doval for a “briefing” in Delhi before leaving for Srinagar.

Many parents accompanying their wards to schools told NewsClick that they had to face inconvenience as situation worsened in the valley against the visit.

“It was difficult as the protests erupted against the delegations’ visit and students reached to their examination with difficulty,” a resident of Nowshera whose daughter appeared in today’s examination said.

The visit brought an abrupt halt in the movement of private traffic in Srinagar city which is already observing shutdown for nearly three months against the abrogation of Article 370.

The delegation was scheduled to meet a select group of people in the valley.

President of Kashmir Chamber of Commerce and Industries (KCCI) Sheikh Ashiq told NewsClick that it is for the first time that any international delegation visiting Kashmir is not meeting them.

“Whenever any delegation arrived in Kashmir KCCI was always provided with the first appointment except this time however, we have already made our position clear vis-a-vis the situation on the ground,” Ashiq says.

Member of Parliament from Anantnag Constituency Hasnain Masoodi says that he had approached the authorities for an appointment with the delegation. The permission was, however, never granted.

“It is a meaningless exercise for eye-wash. There are three elected parliamentarians who have not been allowed to meet the delegation. This is a guided sightseeing program only and nothing result oriented,” Masoodi told NewsClick.