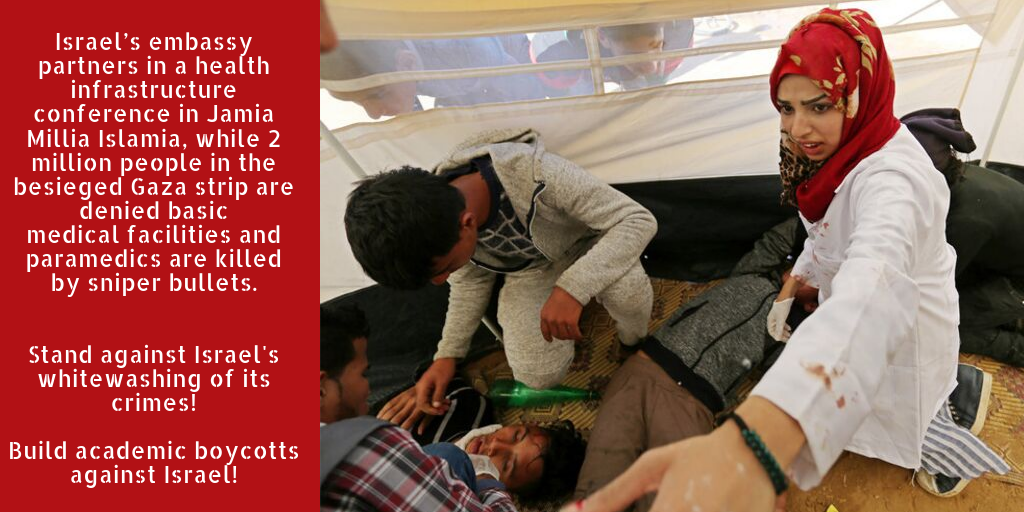 We, the undersigned, appeal to the Faculty of Architecture and Ekistics at Jamia Millia Islamia University, to not have Israel as the country partner for the second 2nd Global Health Zenith Confluence. The event, as mentioned in their website, is from 5 October to 13 October.

This event comes in the wake of a discussion on Hindutva and Zionism at the Convocation Hall in the University of Mumbai which was organised by the Consulate General of Israel in Mumbai. The repetitive presence of the Israeli state agencies in events organised in universities and cultural institutions makes it clear that this is part of the Brand Israel propaganda promoted by the Israeli state, which hopes to whitewash its racist and apartheid policies. The Hindi film industry, among other informal players, has also been complicit in this. These events are an attempt to improve Israel’s image in front of the Indian public, but, through this statement, we would like to make it clear that this we see through Israel’s strategy and stand in opposition to it, in support of Palestinian rights.

It is not a coincidence that these events are proliferating under the current Indian government. Normal civilian life and democratic rights of the people of Kashmir have been crushed by this regime. India is the biggest importer of Israeli arms, financing its occupation, colonial and apartheid regime.

Our appeal to Jamia Milia Islamia is a response to the call made by the largest Palestinian civil society coalition to boycott academic programmes supported by the Israeli state. Surely, authorities at Jamia Millia Islamia can see the brutal irony of Israel’s embassy partnering in an event on health infrastructure while 2 million people in the besieged Gaza strip are denied basic medical facilities and paramedics are killed by sniper bullets. UN experts have said healthcare in Gaza is at a breaking point.

If the university proceeds with the programme in association with the Israeli embassy, it will be complicit in whitewashing Israel’s violation of Palestinian human rights and international law.