Despite odds, determination of women climate migrants is writ large 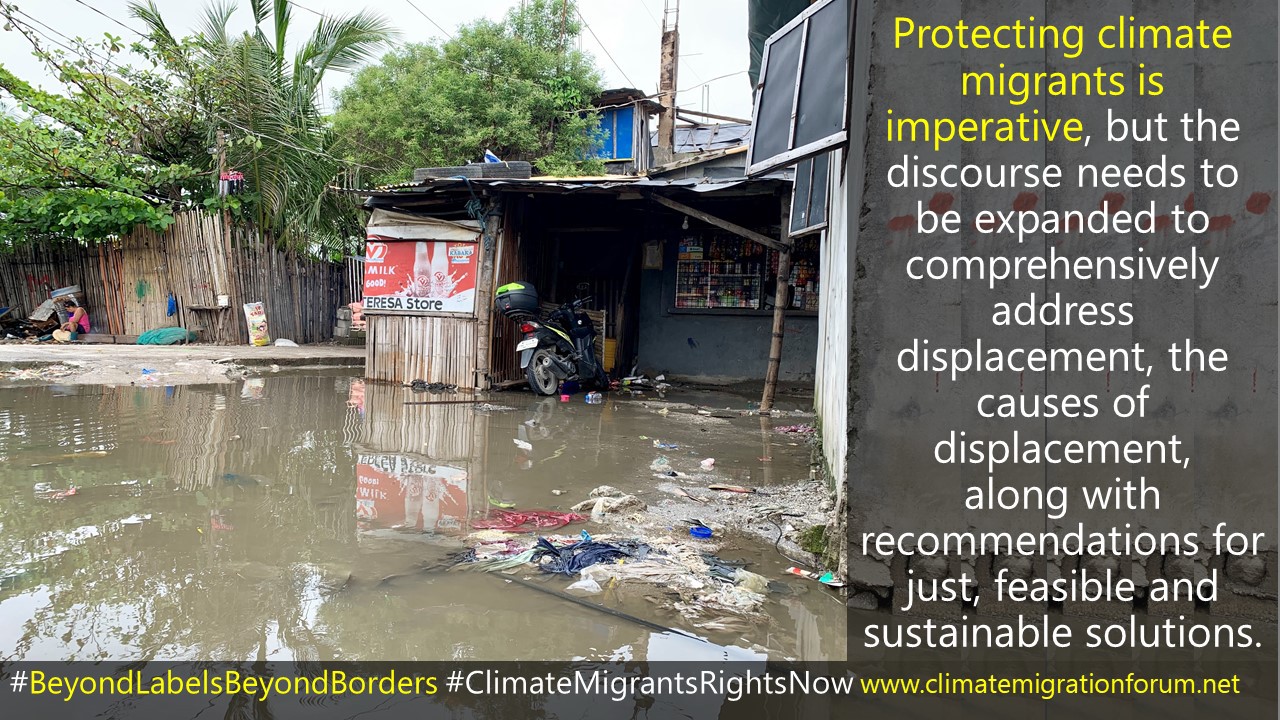 The Baseco reclamation project is one of the 22 reclamation projects planned by the Philippines government along the Manila Bay. It is being opposed tooth and nail by the 70,000 settlers (mostly fisher folks) of Baseco Compound, Tondo, a reclaimed section of the Manila Port Area, who fear losing their livelihood due to forced evacuation and displacement.

I met one such gusty woman settler of Baseco – who is involved in the people’s struggles against climate migration, displacements and other threats to their lives and livelihoods – during a solidarity visit, a day ahead of the 1st International Solidarity Conference on Rights of Climate Migrants co-organised by Rosa Luxemburg Stiftung Philippines, KALIKASAN-People’s Network for the Environment, International Migrants Alliance (IMA) and Asian Peoples Movement on Debt and Development (APMDD).

Salve’s humble abode yet a double storied house, does stand out in that Baseco area which reeks of poverty. Puddles of dirty rain water run through narrow lanes that are lined with small hutments. Frequent typhoons during the monsoons, make life more miserable for the residents of this coastal area. No development worth its name seems to have set foot here. There is no proper drainage and most of the residents defecate in the open. Filth and squalor is writ over every nook and corner. There is hardly any medical facility available. Most men earn their meagre living by fishing and the women are engaged in garlic peeling that fetches them Philippine Peso 70-100 (less than US$ 2) for peeling 15 kg of garlic, which takes about 6-8 hours. Most children, instead of going to school, are also engaged in this activity to add to the family income.

Yet, Salve migrated to such a place in 2000 with her family from Masbate, an island province in the Philippines, where her family was engaged in fishing and other local livelihoods. Prior to her migration to Baseco, a criminal group had ransacked her house in Masbate and threatened to kill them. Once in Baseco, the only job her husband could get was to collect mussels from Manila Bay. She also earns some money by helping neighbours repair their houses. It is through the income earned from these two sources that she has raised 11 children – the eldest is 29 years old and the youngest is around 2. Five of them are married now. The remaining 6 children and one of her married sons and his family live together.

This is a typhoon prone area, and when a typhoon comes there are no mussels to be found. So a typhoon means no earnings, besides other problems that come in the wake – like flooding of the house. During heavy rains the ground floor of Salve’s house gets flooded and they have to move to the 2nd floor. This year the flooding was so great that she needed pumps to drain out the water from inside her house.

Reality check on education and health

There are 2 schools till grade 12. Her daughters were able to study till grade 10, while the sons studied till grade 7, and the younger children are in elementary school. There are 2 government medical centres where services are free, but most of the medicines are always in short supply. Institutional deliveries are unheard of and women deliver babies at home with the help of traditional community midwives. Then again, each ‘barangay’ (the smallest administrative division) like Baseco is equipped with an ambulance whose services can be availed free of charge by any member of the community, during an emergency. But in reality only those who are known to the barangay leaders, are able to get this service. When Salve had an attack due to hypertension, it was the tricycle rickshaw that brought her to the hospital and not the ambulance.

No resettlement without social support services

Well, her family was earlier offered resettlement by the government but she refused, as there was no means of livelihood for her husband in the area of relocation. So, despite the vagaries of nature and other problems, they preferred to stay here, where they could at least earn a living. But now she fears that the reclamation plans of the government will put the residents of this area in deep trouble. She, along with her organisation – the Gabriela National Alliance of Women – is opposing this reclamation project as it will result in more misery for the people.

What changed in past two decades?

11 childbirths have taken a toll on her health, but Salve is happy that her life has improved over the last 19 years. She is economically better off today, more so, because now her sons also contribute to the family earnings. She is also happy to have joined, 4 years ago, the Gabriela National Alliance of Women, which supports and fights for the rights of women, where she is in-charge of international affairs. So when there are visitors from outside who want to visit the community, she attends to them. All this solidarity and engagement, has helped her increase her own knowledge and empower her. Once when two of her children were sick and the medical centre had no medicines, then it was Gabriela network that came to her rescue.

But she would be happier if the local government could implement some proper urban planning in this area – divide the houses into blocks, fix the network of roads to make the area accessible, especially during monsoons, and increase livelihood opportunities.

Yes, women do face severest brunt of any natural calamity as compared to men. Salve feels women are uniquely vulnerable because they have to care more for the children and the family. Also, if one is poor and there is not enough money, women bear the stress and brunt even more.

Salve thinks it is very important for the community to remain united. Sometimes she finds it difficult to encourage her neighbours to get involved for a cause that is meant to help them. So that is a day-to-day struggle. Men too must be the partners of women in the real sense. They should also unite and do their part of the job well – and to begin with, be responsible and provide for the family.

Despite the odds, determination is written across Salve’s face.