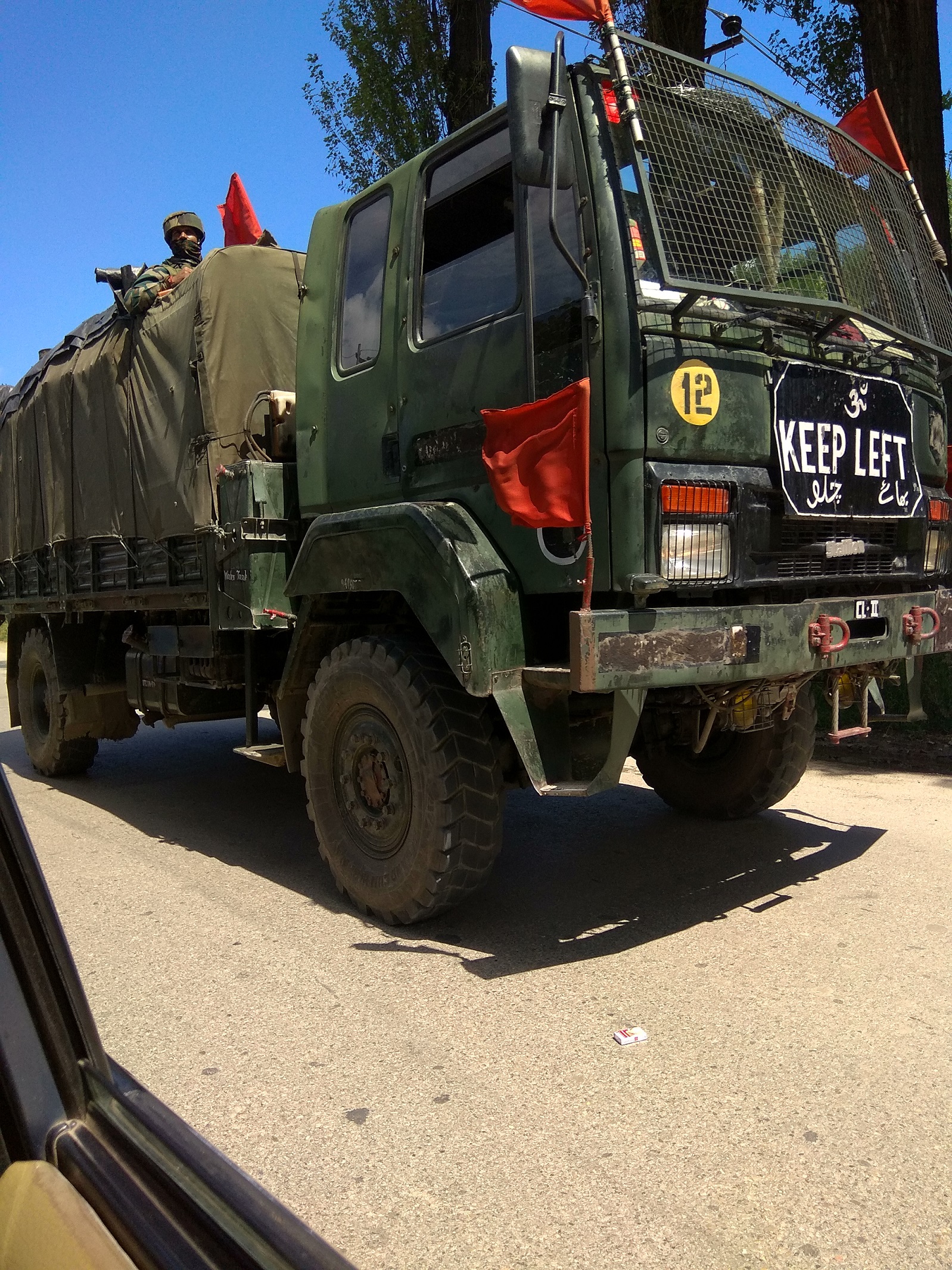 We spent five days (9-13 August 2019) traveling extensively in Kashmir. Our visit began on 9 August 2019 – four days after the Indian government abrogated Articles 370 and 35A, dissolved the state of Jammu and Kashmir, and bifurcated it into two Union Territories.

When we arrived in Srinagar on 9 August, we found the city silenced and desolated by curfew, and bristling with Indian military and paramilitary presence. The curfew was total, as it had been since 5th August. The streets of Srinagar were empty and all institutions and establishments were closed (shops, schools, libraries, petrol pumps, government offices, banks). Only some ATMs and chemists’ shops – and all police stations – were open. People were moving about in ones and twos here and there, but not in groups.

We travelled widely, inside and outside Srinagar – far beyond the small enclave (in the centre of Srinagar) where the Indian media operates. In that small enclave, a semblance of normalcy returns from time to time, and this has enabled the Indian media to claim that life in Kashmir is back to normal. Nothing could be further from the truth.

We spent five days moving around and talking to hundreds of ordinary people in Srinagar city, as well as villages and small towns of Kashmir. We spoke to women, school and college students, shopkeepers, journalists, people who run small businesses, daily wage labourers, workers and migrants from UP, West Bengal and other states. We spoke to Kashmiri Pandits and Sikhs who live in the Valley, as well as Kashmiri Muslims.

Everywhere, we were cordially received, even by people who were very angry about the situation or sceptical of our purpose. Even as people expressed their pain, anger, and sense of betrayal against the Government of India, they extended warmth and unstinting hospitality to us. We are deeply moved by this.

Except for the BJP spokesperson on Kashmir Affairs, we did not meet a single person who supported the Indian government’s decision to abrogate Article 370. On the contrary, most people were extremely angry, both at the abrogation of Article 370 (and 35A) and at the manner in which it had been done.

Anger and fear were the dominant emotions we encountered everywhere. People expressed their anger freely in informal conversation, but no-one was willing to speak on camera. Anyone who speaks up is at risk of persecution from the government.

Many told us that they expected massive protests to erupt sooner or later (after restrictions were relaxed, after Eid, after 15 August, or even later), and anticipated violent repression even if the protests were peaceful.

A summary of our observations

Reactions To The Government’s Treatment of J&K

Reactions To The Abrogation Of Article 370 and 35A

“Normalcy” – Or “Peace Of The Graveyard”?

Is the situation in Kashmir “normal” and “peaceful”? The answer is an emphatic NO. 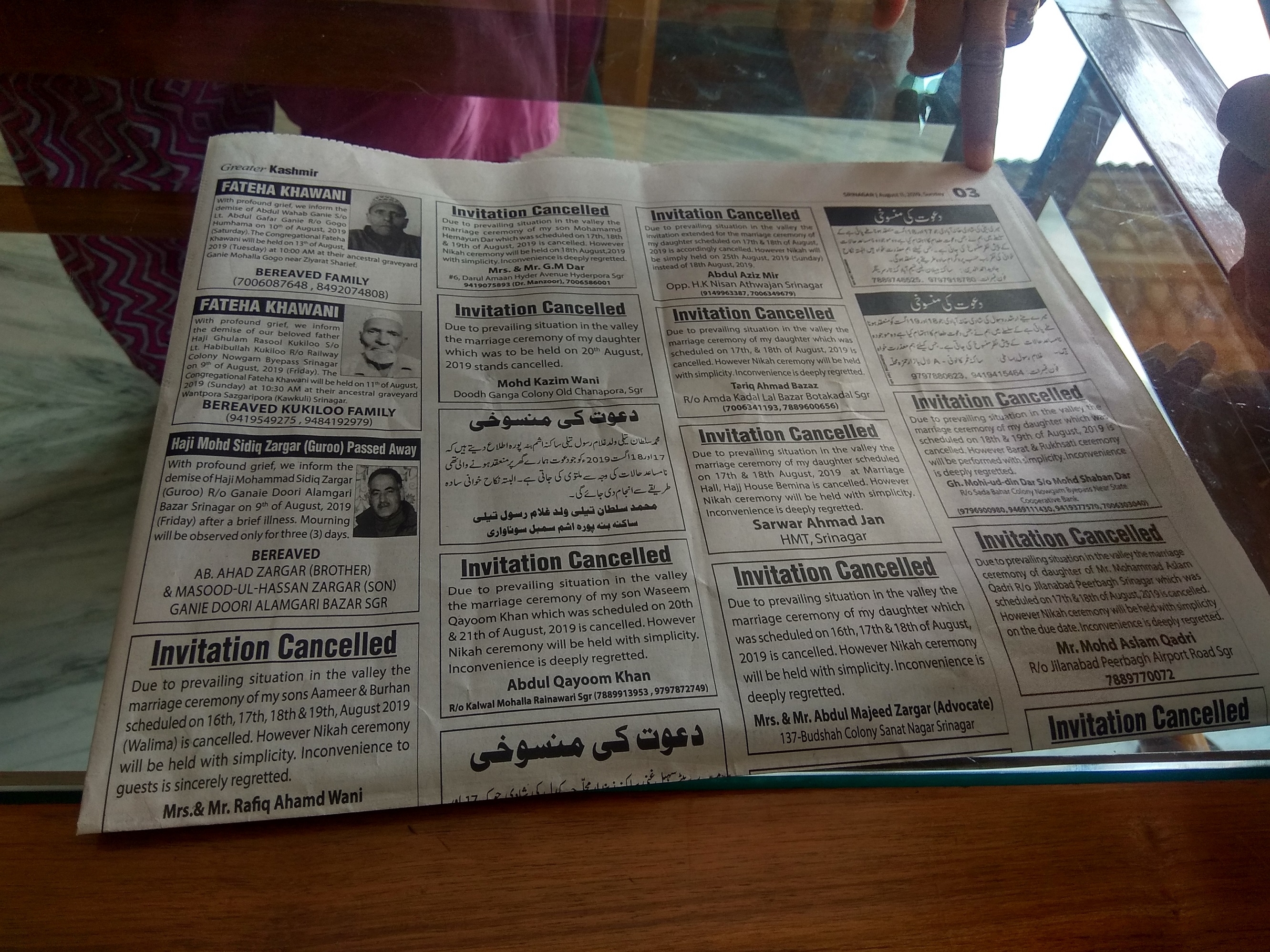 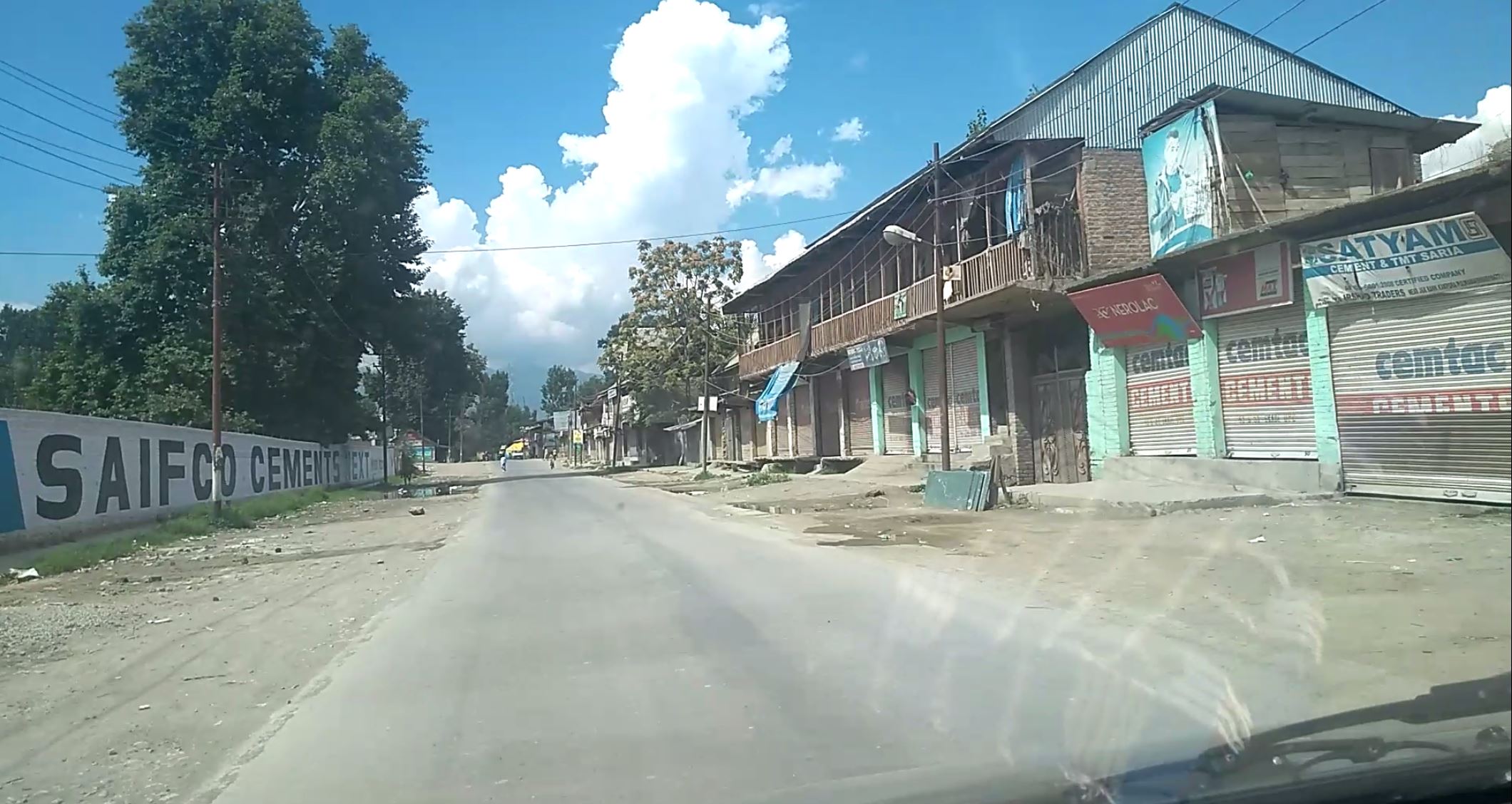 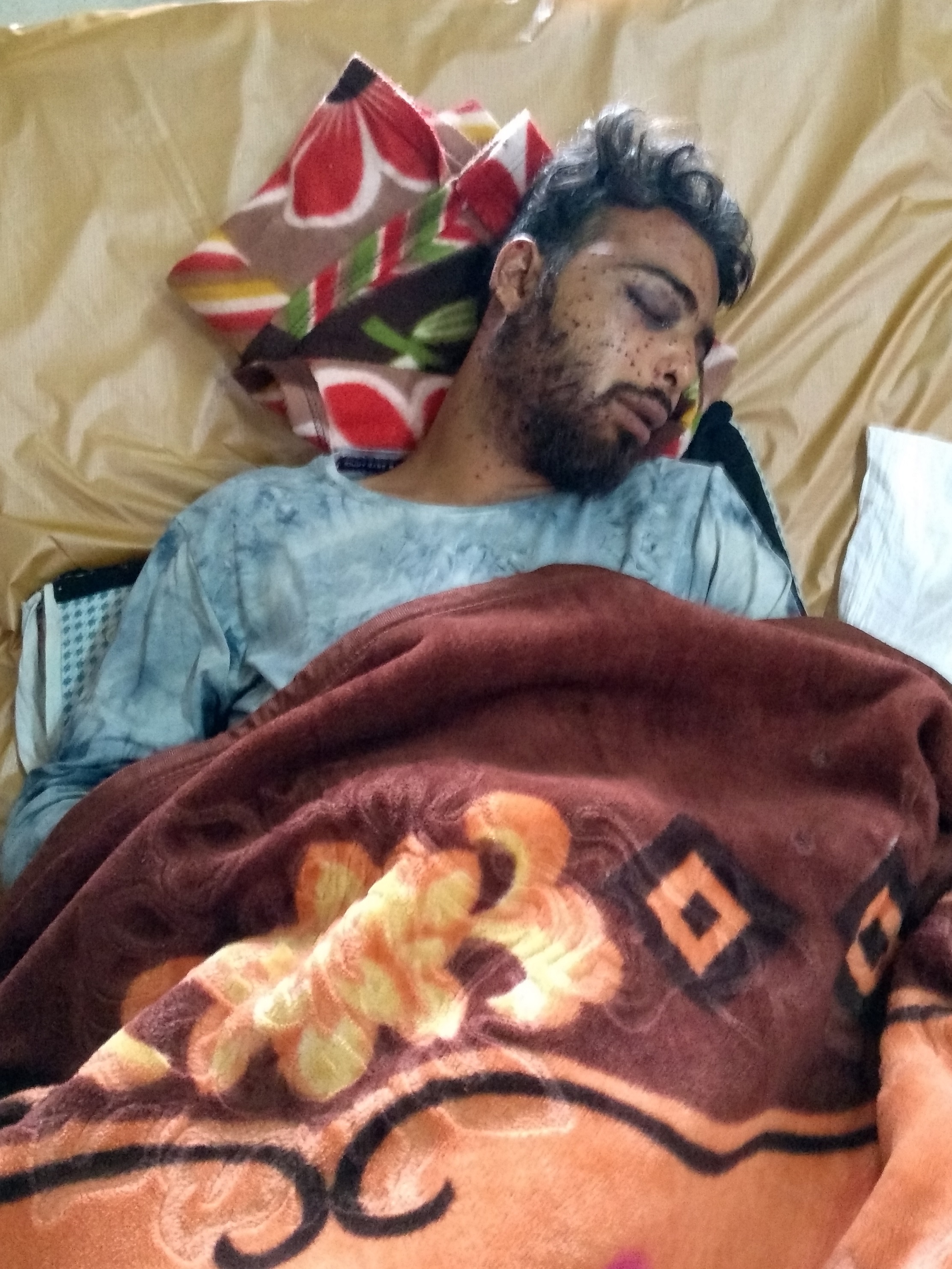 The Gag On Media 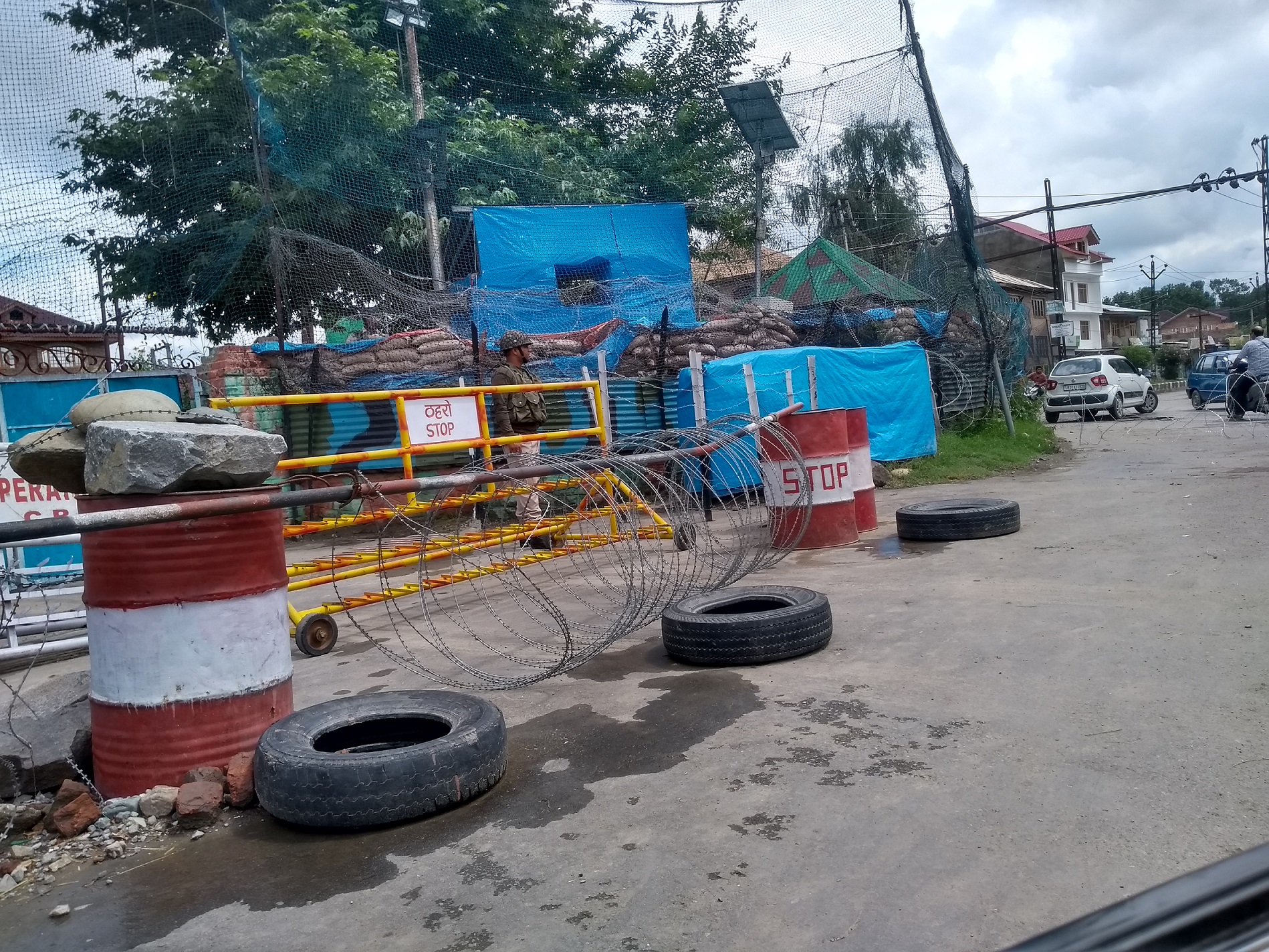 In an op-ed in the Times Of India (August 9, 2019), former Foreign Secretary and Ambassador Nirupama Rao wrote: “A young Kashmiri told this writer a few months ago her birthplace was in the “stone age”; that in terms of economic development, Kashmir was two hundred years behind the rest of India.”

We struggled to find this “backward”, “stone age” Kashmir anywhere at all.

We met BJP spokesperson on Kashmir affairs, Ashwani Kumar Chrungoo at the office of Rising Kashmir, a Kashmir newspaper. The conversation was initially cordial. He told us he had come to Kashmir from Jammu to persuade people to support the abrogation of Article 370. His main argument was that since the BJP had won a 46% vote share in J&K and had won an unprecedented majority in Parliament, they had not only a right but a duty to keep their promise of scrapping Article 370. “46% vote share – that’s a license”, he said.

He refused to acknowledge that this 46% vote share while winning only three Lok Sabha seats (Jammu, Udhampur and Ladakh) was possible only because the voter turnout in the three other LS seats (Srinagar, Anantnag and Baramulla) was the lowest in the whole country.

Should a Government impose an unpopular decision on people of Kashmir who have not voted for that decision, at gunpoint? Chrungoo said, “In Bihar when Nitish Kumar imposed prohibition, he didn’t ask the alcoholics for their permission or consent. It’s the same here.” His contempt for the people of Kashmir was evident from this analogy.

Towards the end of the conversation, he became increasingly edgy when confronted by facts and arguments by us. He got up and wagged a finger at Jean Dreze, saying “We won’t let anti-nationals like you do your work here. I am warning you.”