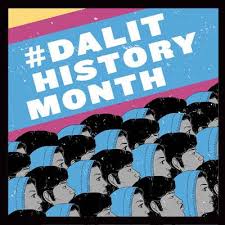 As April drew to an end, so did Dalit History Month (DHM), which is co-founded by members of Project Mukti and Equality Labs. Speaking to the Indian Cultural Forum, they said “we hold this space as dalit, feminist scholars, as a place of hope, honouring the legacy of our ancestors and invoking their power to help dream of a future without caste. Dalit History is political and this year is no different. In many ways the erasure of dalits contribution to south Asian history is a brahminical project to remove our agency and self-determination. To continue to assert resilience and visionary narratives is important particularly in a time when our people are under siege and our historical legacies are being appropriated. That is why our history is more important than ever.”

DHM is in its fourth year now. Through a series of posts on social media platforms such as Facebook and Twitter and through several articles, they have shone the light on historical figures and events that many, even those of us who seek out non-Savarna resources, are unaware of. These are people who resisted the compounded oppression of caste, class, and patriarchy.

I certainly did not know about the “Meeting on the Backwaters” (Kayal Sammelanam in Malyalam), a movement organised by the Pulaya community of Kochi, Kerala. Oppressed castes “were often denied space to organise meetings at that time. Dalits of Cochin were banned from attempting to gather anywhere in the land. Unbending to the societal pressures, Karuppan and Krishnethi (K.P. Karuppan and Krishnethi Asan were two anti-caste leaders) decided to conduct the meeting directly on Kerala’s famous backwaters. People came on small boats to a particular point on the backwaters and tied their boats together. On 21st April 1913, a Kayal Sammelanam was held with hundreds of Pulaya and other caste-oppressed communities gathering from places like Mulavukadu, Panambukadu, and Vaduthala. Even family members of the great dalit leader Dakshayani Velayudhan were present. They organised a mass assembly with huge numbers gathered on small boats on the water. A huge wooden raft was used to make a platform for the programme” reads the article “The Sea has no Caste — Kayal Sammelanam” written by Ashwini KP for Dalit History Month and Published in Medium. 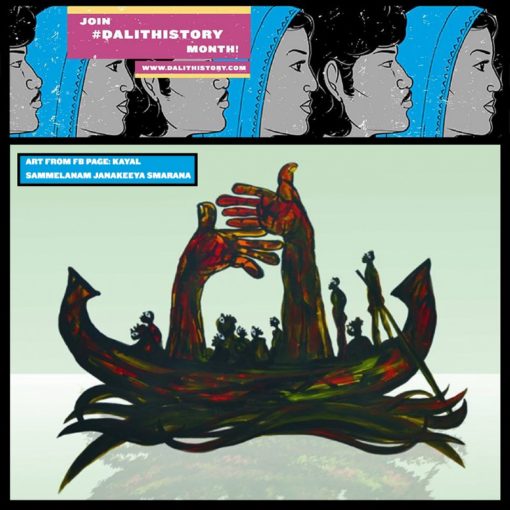 There is Dr. C. Parvathamma, the first Dalit woman sociologist. With a doctorate from the University of Manchester, several awards, books, and research articles to her name, she challenged the deliberately caste blind writings of Tamil Brahmin Sociologist, M N Srinivas, fought for policy reform, and yet faced the discriminatory privileging of Brahmins in academia. Her 1987 book, Housing, Rural Poor, and Their Living Conditions, deals with the housing crisis faced by low income groups in rural India, the efforts and shortcomings of initiatives such as the Janata Housing Scheme and the ways in which socio-political hierarchies in villages undermine state welfare schemes. And there is also Banwhari Devi from Rajasthan an oppressed-caste woman whose unrelenting fight for gender justice “laid the foundation for legislation that criminalised workplace sexual harassment.”

It strives to be intersectional, honouring the work of Trans activist, writer, orator, and poet, Chandini Gagana.

DHM celebrates such people on the frontlines of change and many more, as they do “Ambedkar, Ayyankali, Jhalkaribai, Savitrbai Jyotiba Phule, and Sri Guru Ravidas – powerful and uncompromising caste abolitionists who fought this violence in even more difficult times.” said one of the organisers. “DHM is a decentralised process with events and celebration all across the world. We try to encourage amplification and support for new DHM leaders and events.”

Discussing the critical role of DHM and the joys it brings they say, “we spend a lot of time with dalit feminist scholars, we are writing, undertaking research, and working with dalit sources for content that is meaningful and accountable to communities we work with. It takes longer, but knowledge making that is decolonising and de-brahminising always is. We are really excited by DHM because dalit history is invigorating. It is the alternative history to brahminism and is a tradition that has caste, gender equity as well as a commitment to rationalism and critical inquiry.” Asked about the pushback they may receive given the nature of their work, they said, “We are actually getting a lot of global support as we have grown this movement around the world with events in many countries, so we are ok! And even better than that, it is nurturing visionaries in powerful ways.”

Project Mukti has also initiated a mini-grants process which has led to a powerful grassroots series of events across the country.

April marks the birth anniversaries of Dr. Ambedkar and Jyotiba Phule. It also precedes Asian American and Pacific Islander Heritage Month (APAHM) that will take place in May. APAHM celebrates the culture, traditions, and history of Asian Americans and Pacific Islanders in the United States. But most importantly and quite obviously it acknowledges the powerful example of Black History Month (BHM) which happens in February. They are deeply inspired by BHM, but did not want to impose upon its historical celebrations by choosing the same month.

Black History Month began in February, 1926 as “Negro History Week” by the efforts of historian Dr. Carter G. Woodson. Dr. Carter, the son of former slaves, went on to acquire a BA degree from the University of Chiago and a PhD from Havard University. He was the co-founder of Association for the Study of Negro Life and History (Now known as the Association for the Study of African American Life and History – ASALH). He spent a life time bringing attention to Black history through his scholarship, journals, and books. In 1976 President Gerald Ford officially recognised February as Black History Month.

Patterns of oppression, especially systematised oppression, based on caste in India and race in America and many other countries have sobering similarities. But so do the mechanisms of resistance.

Breakthrough India have also participated in the social media space, highlighting articles and speaking about crucial legacies such as Rajni Tilak who apart from being dalit feminist writer who produced prolific amount of work, also founded the Bharathiya Dalit Panthers, Rashtriya Dalit Andolan, and the Centre for Alternative Dalit Media.

Today, as we celebrate May Day and all that it stands for, we also look back at the legacies that DHM celebrated throughout the month of April including Dr Ambedkar’s contribution to labour rights.

Bharathy is a member of the editorial collective of the Indian Writers Forum.