“Dalits and students are being systematically abused and oppressed” 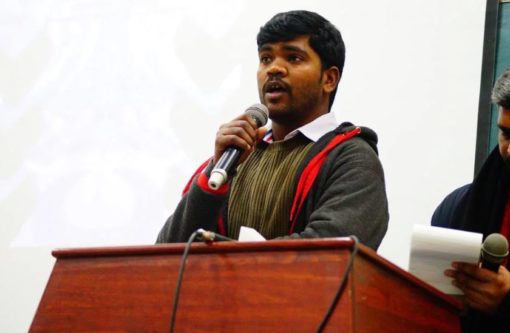 My greeting to all those fighting for equality in India today. My greetings to all those who look at the reality of India in the eye today. I have come all the way to Delhi from my village to share my experience of the grim realities of India.

It’s because of hunger, poverty, caste, communalism and the Devadasi system that our country is suffering. But there are those who lie every day and mask these realities. This hurts me deeply. Let me tell you why.

How have I lived it? The devadasi system is still alive in Karnataka. You may have heard of this system or read about it. But I feel I must tell you about the everyday experience of the devadasi system – its pain, its monstrosity. I belong to a family of devadasis. My mother, my aunts, my sisters – all of them are devadasis. They are also called jogamma.

The Gowda, the landed or dominant caste men of the village, and the temple priest in the village, cook up stories about the deity and create fear in the parents of young girls, forcing them to dedicate their daughters to the deity. They smear turmeric on the girl’s body and dress her as a bride. The priest ties a taali (a mangalsutra) round the neck of this young bride and makes her the slave of the goddess. This Goddess in Karnataka is called Yellamma. The girl dedicated as a devadasi is believed to be free from widowhood and so, auspicious. This auspicious girl is expected to beg in the villages and sleep with any upper caste man. The children she bears grow up fatherless; no man in the village will admit to being the father. This horrible system has been in the country for centuries now. And thanks to Manu, it is only dalit women who are subjected to this monstrous practice. I feel like spitting at this Hindu belief system — that in the name of god, a child is trapped, and girls end up trafficked into sex-work.

Some devadasis in my village earn their livelihood by begging in the name of the goddess during the day. At night they are expected to be at the disposal of the men in the village. Some devadasis have migrated to the cities to work in escort services, and they usually visit their families in the village during festivals. This is true not only about my village, this is the case in many places in Karnataka.

The Devadasi system has not only destroyed the lives of my mother and aunts, it has also brought them very close to death. Many devadasis are HIV positive. My elder sister Renuka is one of them. Renuka was dedicated to Yellamma at the age of eight. She is now 29 and has a two-year-old son and a five-year-old daughter. Both children are HIV positive. The family is living in the shadow of death. But this is not the story of just my family. This is the story of most devadasis. I want to underline this because our Prime Minister says, “Beti Bachao…Beti Padhao.” But who will take care of devadasis? Why has this system not been eradicated? It will only be eradicated if we break the backbone of the Hinduism that trafficked my mother and sisters into sex work. How can I accept Hinduism, how can I accept a society, that destroyed my family?

The Karnataka government has built “Devadasi Rehabilitation centers,” but nothing much has been done to curb the practice itself. The government allocates a tiny bit in its budget for the “development” of devadasis and leaves this responsibility to a few NGOs. The older devadasis receive a meagre pension of Rs 1000 every month, forcing them back into beggary and sex work. Devadasis do not benefit from all the policies supposed to “empower” women. This is my question to the government: when will you look at this hard truth?

Let me tell you a little about my own life. I was a child labourer. Like many boys in my village, I worked as a daily wage labourer at the house of a rich landlord. I spent five years in the cattle shed, taking care of the cattle, cleaning the shed, taking care of the landlord’s children and working in his house. The Karnataka government passed a law prohibiting child labour. I was taken to a centre where I learnt to read and write. The boys in this centre had been hotel cleaners, mechanics, rag pickers, beggars, or domestic help.

I learnt about what Buddha has taught, and Basavanna and Ambedkar. I continued to learn; I wanted education. Later I began participating actively in left and dalit movements. I became a part of conclaves that included Gauri Lankesh, M M Kalburgi, K S Bhagavan and Devanur Mahadeva. I had begun to write about the plight of my people; these conclaves gave me the space to give voice to my people.

While I was studying for my MA, I was attacked. My attackers threatened to kill me for writing against the caste system and the Hindu religion; they said they would chop off my fingers. I somehow managed to run away from them and take shelter in a police station. I think the same group that attacked me also killed Gauri Lankesh, a voice of the oppressed, and M M Kalburgi, who was determined to free history from lies. These killings are nothing less than the assassination of the constitution itself. We also saw how fascists celebrated these killings. But we can fight them by uniting against them. They may kill us, but our thoughts will live on.

Friends, we have to tell the real story of this country to those who talk about digital India.

The dalit youth and students in this country are systematically abused and oppressed. We see dalits suffering. But sometimes we also see dalit youth involved in violence, even communal violence, and arrested for it. How do we understand this duality? Where do we find a solution? One thing is clear: the solution is not to celebrate Ambedkar Jayanti. Those in government may think it is. Even laying roads and building houses in dalit colonies is not sufficient. Only equal land distribution and equal political opportunity will help dalits and lead to true development.

But are those in power looking for these answers?

They are talking about digital India, Make in India and smart cities when violence against dalits has increased. Dalits are bleeding. There are any number of incidents I remember from the last five years. I remember that dalit boy in Telangana, beheaded by an upper caste man in 2018 for falling in love with his daughter. I remember the twelve-year-old dalit girl in Bijapur, gang raped and killed by upper caste men for winning a prize in a competition. I remember the girl in tenth standard in Lucknow, raped in the school premises. Despite evidence to prove the rapist’s guilt, nothing was done in the Lucknow case. This is how saffron terror works. Communal politics takes good care of such criminals.

The Prime Minister washed the feet of safai karamcharis. We can only laugh at this drama. I have seen many civic workers cleaning medical waste and industrial waste with bare hands. They are fighting to get their wages on time. And the man who has done nothing to get them justice is washing their feet to show he cares for them? Would he feel the need to put on this act if he was working on policies for their development? His swachh bharat mission does not care about the civic workers. It is only a mission for political gain.

The same PM had nothing to say when Ananth Kumar Hegde spoke of changing the constitution and replacing it with Manusmriti. The minister has been making this kind of public statement with impunity. This tells us something about the government in power. It tells us something about their members in parliament. It tells us that those who plan to harm the constitution are sitting in our parliament now. If we do not fight them, this country will be destroyed. Every Indian and, especially, every dalit should battle these people who do not respect the constitution; battle those who sow their seeds of communal hatred; and battle those who are apathetic to the reality of dalit lives.

But friends, when we talk about the growing violence against dalits, we also need to question the silence of dalit leaders and politicians sitting in parliament. If dalits do not understand the casteist agenda guiding today’s leaders, the destruction of dalits is certain.  It hurts me to see that some dalit youth are associating themselves with the saffron terror unleashed by the Sangh Parivar. All of us bear the responsibility to guide this youth and make sure they do not become tools of the saffron agenda.

I want to say this once again: when lakhs of dalits in the country continue to live with threats to their lives, when they have no land, job or money, when they still live in slavery, who is digital India for? Who are its smart cities for?  Maybe if we have smart dalit colonies and smart slums we can feel proud about being Indian. Jai Bhim. Jai Bharat.

This is the text of Huchangi Prasad’s speech at the book launch of Battling for India: A Citizen’s Reader, March 30, 2019, at the Constitution Club of India.