First Dalit Collector who Changed a Feudal District in the 1970 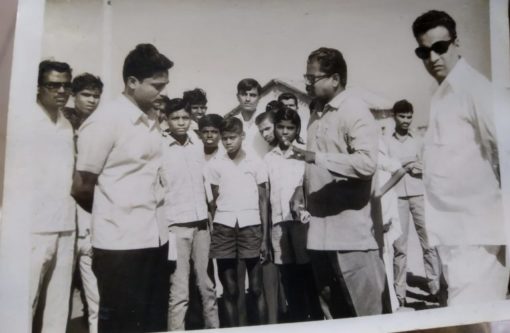 Next to Hyderabad, Warangal is the second biggest city of the Telangana state. Most of the present Telangana state’s heritage symbols, Kakatiya Gate, and its tank based irrigation system go back to the history of Warangal, which, in the medieval and pre-medieval Telugu, was known as Orugallu. After this town became the capital of the famous Kakatiya dynasty in the thirteenth century, that area seems to have undergone a big change.

The Kakatiyas built several tanks including the two biggest ones of the present Telangana state called Ramappa and Pakal that irrigate thousands of acres. That irrigation system gradually tuned Warangal into a feudal land lord bastion.

In 1972, the first Dalit collector, Kaki Madhava Rao, took charge as Collector of Warangal dist. I was in my under graduation at Warangal Arts and Science college, that was in between the collector’s majestic residence and the old Nizam model office in Subedari.

He was almost an everyday news maker. That he was a Naxalite collector and that he was sleeping in the hearts of land lords (in Telugu, bhoosamula Gundello Niduristunna collector) .

The Reddys were the main landlords of the area who controlled most of the land , except one big Kalleda Velama landlord family. The Janna Reddys, Nookala Reddys, Pingili Reddys, Yepuri Reddys and so on, were well known landlord families. All elected posts were in their hands—MP, MLA, MLC Panchayat raj bodies and so on. My village was under the Dwaraka Pet Mahaboob Reddy family, which almost was losing its feudal control by then.

Those were times of transition for the landlords as the 1973 Land Ceiling Act of Andhra Pradesh came during Madhava Rao’s stay there. The Reddy landlord were dead against P.V.Narimha Rao, the then Chief Minister ,who got that Act passed and also posted Madhava Rao in the most powerful feudal district as collector around that time.

When I first saw Madhava Rao in a public meeting in the Arts and Science college auditorium, I was surprised that he was very young, tall, thin, with an impressive face cut, and well combed thick hair. His looks had never shown his Dalitness.

He did not wear an impressive dress, as he was wearing plain white trousers and bush shirt. He spoke in flawless English with measured sentences. He looked so soft I could not believe that he could create terror among the landlords. Not only me but many in the audience who saw him in that meeting got that feeling ; “where did he get those guts?”

I thought this collector post is mightiest of all I know, because he was shaking many mighty landlords, who could kill anybody and get away with. All the villagers used to shiver the movement any land lord’s name came up for discussion in the village adda meetings under the trees or at racha banda (dispute resolution place). The final word was that of the landlord.

The Dalits I know in that area and in my village were Madigas, who had no property and starved in summer days. They would have good feast only when a dead bull/cow/buffalo is given by the farmers. All castes above them, including my caste people, not only treated them as untouchable but did not even call them by name. Are-Ture (most demeaning way of addressing human beings) abusive language against them was very common cultural norm. Even the children are taught to address them like that.

This collector came from that background and was making the richest landlords of the district shiver in their dhotis (not many were wearing trousers among them then).

His English and mode of communication was much better than that our of college principle, Prof.Janardhan Reddy, who himself came from a landlord family of that area.

Education and good English made him collector and that position made a Dalit the ruler of the landlords. This was something unbelievable for many. It was a miracle constructed by democracy and reservation.

What did he actually do?

He consciously gave every single policy and scheme of the Government, a poor man’s orientation. The limited supply of fertilizers were made available to poor SC,ST, and OBC farmers. The limited draught funds were spent in digging irrigation wells in Government land assigned to landless SC,ST people through Cooperatvie farming societies. Restored the lands of small farmers which were forcibly held by the landlords.

Several such measures made the landlords angry and dubbed him as the Naxalite collector in their everyday language.

But it is the formation of Toddy Tappers’ Co-Operative Societies and giving them toddy tapping rights that shook the feudal power.

Excise rules of the Government empower the excise dept to auction tapping rights of all trees located in both Government and private lands.

Land owners can seek exemption from tapping trees located in their Patta lands if their needs were genuine. But in most cases they deceived the tappers. Madhava Rao used the Government rules and the exercise auction procedures to change situation.

Not willing to forego their illegitimate fight, the dogged landlords threatened tappers of their respective villages that they will shoot down the toddy pots.

The collector personally went to the most troublesome villages with the District Superintendent of Police and jeeps full of armed constables. The troublesome landlords were lined up, shown the armed police and were told that the pots of tappers are as valuable as heads of Doras ( landlords). The landlords gave up.

The collector applied the ‘land to the tiller’ concept to the given situation and defined “tree to the tapper”.

The result of this struggle was that the tappers in the district are still enjoying their tapping rights on nomination basis.

For the first time a collector’s office created a movement and also produced a great leader in the community from among the very oppressed communities. Many years later Ilaiah was killed by the landlords in a train when he was travelling to Hyderabad.

Toddy was a most popular drink among the poor and rich in Telangana.

The occupation was very hazardous with a moku-mutthadu technology of climbing tree to tap the kallu (toddy) with feet and palms getting pressed to the tree. Several men would fall from the top of the tree and die or become disabled without any source of livelihood to his family. The Formation of the societies improved their life.

Once the the Agriculture Land Ceiling Act, got enacted the landlords of the state were to lose their surplus land. Bowing to landlord pressure the Congress made PVNR to resign. President’s rule was imposed.

The Warangal landlords used this opportunity and submitted a written complaint to the President of India that their collector is a Naxalite. An IB enquiry was ordered against Madhavarao. He survived because of the massive support of poor people.

Yet another major project of Madhavarao was the formation of more than ten large scale Agriculture land Co-Operative Societies.

The Jalli Society near my village, was one of them. The collector allotted large patches of several hundreds acres of Government land to Dalits, tribals and BCs in the surrounding villages. Land was not parceled to individuals but all families should cultivate collectively and take equal share from the produce. That was the first experiment, that too by all lower castes.

Seen in the light of the Soviet and Chinese co-operative agrarian operations, and the 1973 Land Reforms Act of Andhra Pradesh, the landlords of the district were fear stricken.

This collector gave an instruction both in the office and residence, that the poor will have unhindered darshanam. For the rich , appointment was a must! There was poignant joke about the collector, “if one wants meet the collector without appointment, one must go in rags”.

In those days, poor people falling on the feet of landlords and officers was very common. Madhava Rao would order the poor not to touch his feet. If anybody did so, he would slap him.

He would insist on the poor sitting on the chair before giving his petition.

These policies of the dalit collector turned the administration by 180 degrees. If this is not a Naxal…who else is Naxal? The Naxal collector’s style was talk of every household.

After this mighty administrative jerk the feudalism in that district was never the same again, though other struggles and administrative reforms followed.

PVNR refused transfer him but Jalagam Vengal Rao , who succeeded him hounded out him within weeks of his becoming CM. He was known as Emergency CM.

What made this young Dalit officer shake the feudal system of a district, where he was the ruler? What he did was a job of meritorious man or not? Is there no relationship between his labouring childhood life, back home in a Dalit family ( as he was from a first generation laboring Dalit family of Krishna district) and his understanding of changes coming in Soviet Union and China?

Was he right or wrong in doing so?

What lesson should the young IAS trainees of today’s India take from this experiment of a young officer, way back in the 1970s?