The everyday life of law in the Indian republic

The Indian Constitution is an exceptional document on many counts. It is the oldest surviving in the history of de-colonised nations, it was written by Indian citizens rather than by Whitehall, as was the case for many former colonies of Britain. Its writers represented diverse backgrounds, demands, inputs, and petitions poured in from postmasters, housewives, and even schoolchildren, during its drafting. It was truly conceived as a people’s constitution.

Written by Rohit De, A People’s Constitution is a record of this document’s endurance and the processes of its adoption. The author presents the three-fold argument that the Constitution is firstly a structure for daily living; secondly, engagement with it came from ordinary citizens including various minority groups; and lastly that most of these engagements stemmed from attempts to regulate market relations. It sets aright the unfortunate misconception that the Constitution is a document in English created by elite consensus. De presents cases from records of the Supreme Court of India, that reveal how drinkers, smugglers, small-scale vendors, butchers, and prostitutes, all helped shaped the constitutional culture, as they re-negotiated laws and policies, setting fascinating legal precedents. The following are excerpts from the sections “Talking the State’s Langauge” and “Constitutionalism from the Margins” of the book. 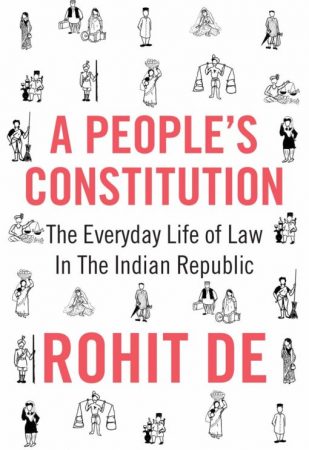 Critics of the Indian Constitution have repeatedly pointed out that it reflected a certain bourgeois nationalist vision of the state rather than popular constitutionalism.This concern was shared by B. R. Ambedkar, the chairman of thedrafting committee; he warned the Constituent Assembly, “Constitutional morality is not a natural sentiment. It has to be cultivated. We must realize that our people have yet to learn it. ”1 To its authors, the Constitution was a state project that had to be disseminated among the masses, through school textbooks, pamphlets, public exhibition, and documentaries.2

The availability of judicial remedies, however, made the Constitution a two-way process. This point was noted by Zairul Hassan Lari, a renegade Muslim League member of the Constituent Assembly, who left for Pakistan midway through the deliberations. Lari agreed with Ambedkar that “constitutional morality… had to be cultivated,” but he perceptively noted that not only people but governments had to learn it.3 The Constitution by itself was neither emancipatory nor repressive but merely provided a language in which the citizen could communicate with the state. Upendra Baxi has argued that the power of judicial discourse in India was the capacity to raise awkward questions about the intention, competence, and wisdom of the executive.4 This awkwardness frustrated the executive, delayed and forced policy changes, and caused significant expenses. A newspaper cartoon (fig. 5.1) conveys some of this frustration; it shows Nehru patching up holes in the Constitution while lawyers are digging new ones.

Those who had made successful interventions in the process of constitution making now demanded that the Constitution be amended or transformed. Bombay ministers finally held that no solution except a constitutional amendment could successfully implement Prohibition.5 After the Hanif Qureshi judgment, the cow protection lobby despaired of any solution under the present Constitution.6 Poignantly, a liberal lawyer like Durgabai Deshmukh, on being confronted by prostitutes asserting their right to their profession, argued that the solution lay in having the courage to amend the freedoms in the Constitution.7

Although the constitutional strategy was often used as a tactical tool, it also began to operate as an organizational assumption for citizens and as a background threat for the state.8 Despite frequent denials of their rights by the state, Muslims in colonial India continued to assert that they could sacrifice cows based on a right rooted in their status as British subjects. Similarly, sex workers continued to assert that they had a right to practice their profession even after Supreme Court judgments to the contrary. This is slightly different from American constitutional rights consciousness, which Hartog defines as “a faith that the received meanings of constitutional texts will change when confronted with the legitimate aspirations of autonomous citizens and groups. ”9

This faith survived even when these aspirations, such as those of blacks, women, and gays, ran contrary to the current doctrines of constitutional law. However, implicit in this aspiration was the idea that the state would endorse such faith at some point in the future. In the Indian context, such faith seemed to exist without necessarily requiring or seeking state endorsement, and it remains a puzzle for further inquiry. It is tempting to suggest that Indians began to believe in the Constitution or that they were internally transformed by it, but it is impossible to prove this. What is definite is that Indians from a wide range of groups came to see the Constitution as a check on executive power and a powerful way to frame their claims.

Concurrently, state authorities began to become more cautious about law. In the Prohibition case, after multiple legal challenges, the government spent considerable time and energy trying to make the system of investigation and administration of Prohibition offenses conform to legal standards.10 Experts hired by the government drew widely on knowledge of comparative law and experiences in other jurisdictions, particularly the United States.11 Legal experts in the Ministry of Law at Delhi struggled to bring wayward state legislation in conformity with the Supreme Court decisions in the Qureshis’ cases.12 Similarly, the problems of prosecuting sex workers led to significant rounds of consultations between police officers and social workers.13 Therefore, it was a constitutionalism from below that made the postcolonial state attempt to discipline itself.

What emerges is not a story of simple resistance to state authority. The process of pushing back through the Constitution brought citizens into closer engagement with the state and reaffirmed its right to exist.

This book has shown that constitutional litigation was not limited to elites but was accessed by a cross-section of people. I would even suggest that the constitutional culture of the 1950s was shaped predominantly by the interventions of certain marginal groups. The institution of electoral democracy generated a particular form of subalternity: minorities that were unable to succeed electorally increasingly turned to the courts. Although this is not unusual in most democracies, the situation was complicated in India because electoral minorities are not just members of a socioeconomic class or followers of a certain ideology but are inextricably linked to ascriptive identities.

As I started looking for cases involving transformative legislation, I did not expect that every set of legal challenges would be dominated by members of a particular community. Although cow slaughter was more easily an identity issue, I had not imagined that commodity controls, Prohibition, and prostitution would also have a preponderance of cases filed by certain electoral minorities. Conversely, all electoral minorities were not able to gain access to the courts. So what determined the ability to successfully litigate?

As this book has shown, it was often groups that faced the greatest degree of state oppression that were the most able to litigate. Butchers, liquor sellers, and sex workers all dealt with multiple sets of regulation and faced the intrusive presence of state officials (health inspectors, policemen, social workers, or municipal officers). They all experienced multiple points of contact with the state and gained familiarity with the rules and regulations.14 The level of awareness demonstrated by illiterate sex workers about the intricacies of zoning regulations, for instance, is often surprising. Traders, often operating outside the gaze of the state, suddenly found themselves under surveillance during World War II, and this surveillance became institutionalized after independence.

The groups that exhibited greater legal consciousness and access were those with strong community associations. These included formal institutions like the Bombay Parsi Panchayat and the Marwari-dominated Federation of Indian Chambers of Commerce and Industry, more hybrid associations like the All India Jamiatul Quresh Action Committee, and the newly set-up Allahabad Dancing Girls Union. Groups that doubled as professional associations and caste or community organizations were instrumental in legal mobilizing, lobbying, circulating knowledge, and supporting litigation. The existence of these associational forms complicates the divide between the categories of civil society and political society. It also challenges traditional accounts of liberal politics and suggests that liberty, property, and community are inextricably linked in India. Although liberal theory has carefully distinguished individual rights and groups rights, it is clear that in India the claims for individual rights were organized, funded, and supported by a group seeking to protect its own practices.

Group rights, particularly minority rights in India, have largely centered on questions of culture (language, religion, and status). This is despite Ambedkar’s memorandum on minority rights, which noted that the “connection between individual liberty and the shape and form of the economic structure of the society may not be apparent to everyone . . . nonetheless the connection is real. ”15 In a society build on caste, ascriptive identities and the structure of the economy were closely interlinked, and the Nehruvian state’s attempts to reengineer the economy were resisted through networks of caste. This challenges the widely held belief that the vernacularization of Indian politics and the deepening of its electoral democracy happened in the 1970s and that this was when politics of caste, region, and religion erased an earlier vocabulary of class interests and capitalism. Claims for liberal rights in the 1950s arose from an economic world that was structured by caste. For instance, Yasin’s case followed similar attempts by Muslim vegetable sellers in other towns in the province of Uttar Pradesh. This was not a coincidence. Much of the vegetable trade in north India is dominated by Arians, a Muslim subcaste of market gardeners, and it is likely that Yasin’s petition was part of a coordinated action, or at least a result of networked information sharing.16

This book has therefore built on the argument that the introduction of liberal democratic processes in India, whether elections or judicial review, have not eradicated caste but have been mediated by it. It is now widely acknowledged that the poorest and most vulnerable populations in India are perhaps the most active participants in electoral politics, and it is through their participation that the “democratic process has in some ways detached itself from the institutional infirmities that surround it and acquired an autonomy of its own.”17 Contrary to conventional belief, similar processes, I have shown, are at play with constitutionalism.

This is not to suggest that all castes and groups could participate in these processes in the 1950s. Landless peasants do not appear in these narratives, and Dalits and tribals remain underrepresented, except when they were arrested by the police. The majority of the groups appearing in the archive are able to participate in the bazaar economy. However, scholars have demonstrated that in recent years, both Dalits and tribal groups have drawn upon the Constitution to make assertive claims in the courts and outside.18

These are excerpts from A People's Constitution written by Rohit De and published by Princeton University Press. Republished here with permission from Penguin Random House India.
Rohit De is Assistant Professor of History at Yale University.