Amol Palekar: “Why are we still silent about this?” 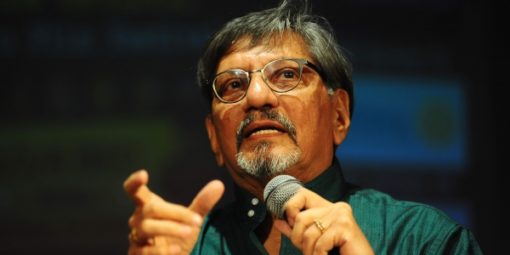 Amol Palekar, one of India’s finest actors and filmmakers was rudely cut-off by a member of the National Gallery of Modern Art, Mumbai. Palekar was invited to speak at the first retrospective of artist Prabhakar Barwe who had carved a unique discourse in modern Indian art through his esoteric art works and peculiar visual language.

In his speech, Palekar was criticising the government’s move to scrap local advisory committees at the Mumbai and Bengaluru branches of the galleries to make way for unilateral regulatory practices which involved seeking permissions from the Ministry of Culture at the Centre regarding all future exhibitions.

At this point, a gallery member on stage interrupted his speech and reminded him to restrict himself to the event in question, the exhibition of Barwe’s works.

This gesture of restricting an artist’s speech to issues of the aesthetic not only implies that artists can have no opinion on state or other matters except for their art, but also that they hold no stakes in the ownership of cultural institutions.

If an artist cannot speak freely even in a creative space like the NGMA, where else can he speak?

Speaking to the Indian Cultural Forum, acclaimed artist Vivan Sundaram called it “deeply unfortunate that Amol Palekar was not allowed to speak at a liberal space like the art museum which organised an event honouring creative expression.” Considering how the curator and director of the museum also endorsed the censoring of Palekar’s speech, Sundaram called the move “a reflection of the times we’re in,” and in-sync with the central government’s unsaid decision to monitor the arts.

A quote from the same speech that Palekar was not allowed to complete, reads: “Visible things always hide other visible things. We always want to see what is hidden by what we see.”

Through these lines, he revealed that this retrospective was the last show decided by an advisory committee of local artists, which has now been scrapped. He noted the aesthetic judgements exercised by a committee made of local artists, independent from the influence of “some bureaucrat or an agent of the government with an agenda of either moral policing or proliferation of certain art commensurate with an ideological incline.” He also questioned the “real intent” behind such restrictions and “unilateral decisions”

“Isn’t this another level of censorship on artistic freedom? Isn’t this yet another assault on the federal structure of this plural nation? The policy of diffusion and abortion of eclectic voices and artistic expression has muzzled yet another institution! This control over the NGMA which is the sacrosanct venue for artistic expression and viewing of diverse art is the recent most casualty in this ‘war against humanities’ as someone recently put it! I am truly disturbed… where is it going to stop? This sea of freedom is receding day by day, gradually but incessantly… why are we silent about this?? What is more upsetting is that those privy to such unilateral orders did not speak out, protest or even question it!”

Filmmaker, theatre practitioner and art curator, Madhushree Dutta on speaking to the IWF, underlined three issues at stake in the particular incident, “Amol Palekar was disrupted repeatedly during his speech as he was speaking against the regime. Second is even the little shadow of democracy – in the form of the advisory board – that was there is now abandoned. And the third is – such institution are treated as an extension of the party in power and not as a public institution.”

This incident has not only raised questions on “censorship”, and the role of artists in the state, but on the nature of these cultural institutions itself. When the NGMA was built in 1949, “it was nurtured carefully by Prime Minister Jawaharlal Nehru and Maulana Azad, sensitive bureaucrats like Humayun Kabir and an active art community,” reads the museum’s official websites. Thus, emphasising the role of the artist as an active agent and participant in the conception and building of the organisation. In his inaugural address, titled, “The Writer and the State” at the Fourth P.E.N. All India Writers’ Conference in Baroda in 1957, Nehru had discussed the role of the writer and what the state and writer have to do with each other. For Nehru, the individual freedom of the writer was critical. It was essential that the state encourage writers, but it had no business interfering with the literary bodies. This was Nehru’s idea for literary bodies, but could be extended to all other institutions of art.

The whole point of setting up these cultural institutions post-independence, as collectives, was that they be supported in principle by institutions, but run by artists towards to foster the arts. Considering the rich and plural history of dialogue and dynamic exchange that informed the establishment of these institutions, I ask Madhushree Dutta if the scrapping of local committees betrays the foundations on which these institutions were built. “In the case of NGMA, there has been an advisory board and also a director who was not a bureaucrat. But this board too was heavily dependent on the ministry. Each programme details had to be passed by the ministry. There have been instances of the painstakingly structured programme being called off at the last moment by the ministry. NGMA is not only an art gallery but a huge national property. It has always been underused. One of its main activities is to host government events.”

This forgetting of the “public” in a public institution is a dangerous thought. These conglomerates set up in recognition of the cultural value of art that served different masters, of which the public formed a crucial part. Schools, and colleges and tourist flock to museums regularly. When people visit capital cities, a visit to these places remains high on their agenda. “There is a tendency to think that these are elite places. On the contrary, they are actually public places and we need to engage with them as such” explains Dutta.

Thus, art like all creative expression is intrinsic to public interest, On its website, the NGMA, professes to help people to look at the works of modern art with greater joy, understanding and knowledge by extending their relationship with our daily life and experiencing them as vital expressions of the human spirit,” but somewhere it seems to be losing this ideal in practice.

Read more:
Imprisoning Minds
“Censorship outside of the Censor Board is the problem in Maharashtra”: Rajeev Naik
The Exclusions in the International Film Festival of India (IFFI) 2018: Some Thoughts