Justice DY Chandrachud: “It’s too long a period for the LGBTQ community to suffer the indignities of life” 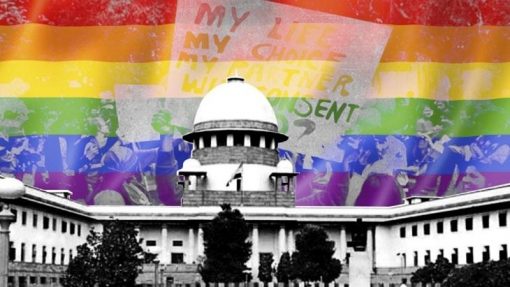 On 6 September, the Supreme Court of India passed a historic judgement by decriminalising homosexuality between consenting adults, Section 377. A four-judge bench of the Supreme Court comprising of Justice RF Nariman, AM Khanwilkar, DY Chandrachud and Indu Malhotra, along with Chief Justice Dipak Mishra, pronounced four separate judgments and one unanimous decision.

Here is an extract from the judgement by Justice Dhananjaya Y Chandrachud.

From denial to freedom

“What makes life meaningful is love. The right that makes us human is the right to love. To criminalise the expression of that right is profoundly cruel and inhumane. To acquiesce in such criminalisation, or worse, to recriminalise it, is to display the very opposite of compassion. To show exaggerated deference to a majoritarian Parliament when the matter is one of fundamental rights is to display judicial pusillanimity, for there is no doubt, that in the constitutional scheme, it is the judiciary that is the ultimate interpreter.”1

1. The lethargy of the law is manifest yet again.

2. A hundred and fifty eight years ago, a colonial legislature made it criminal, even for consenting adults of the same gender, to find fulfillment in love. The law deprived them of the simple right as human beings to live, love and partner as nature made them. The human instinct to love was caged by constraining the physical manifestation of their sexuality. Gays and lesbians 2 were made subordinate to the authority of a coercive state. A charter of morality made their relationships hateful. The criminal law became a willing instrument of repression. To engage in ‘carnal intercourse’ against ‘the order of nature’ risked being tucked away for ten years in a jail. The offence would be investigated by searching the most intimate of spaces to find tell-tale signs of intercourse. Civilisation has been brutal.

3. Eighty seven years after the law was made, India gained her liberation from a colonial past. But Macaulay’s legacy – the offence under Section 377 of the Penal Code – has continued to exist for nearly sixty eight years after we gave ourselves a liberal Constitution. Gays and lesbians, transgenders and bisexuals continue to be denied a truly equal citizenship seven decades after Independence. The law has imposed upon them a morality which is an anachronism. Their entitlement should be as equal participants in a society governed by the morality of the Constitution. That, in essence, is what Section 377 denies to them. The shadows of a receding past confront their quest for fulfillment.

4. Section 377 exacts conformity backed by the fear of penal reprisal. There is an unbridgeable divide between the moral values on which it is based and the values of the Constitution. What separates them is liberty and dignity. We must, as a society, ask searching questions to the forms and symbols of injustice. Unless we do that, we risk becoming the cause and not just the inheritors of an unjust society. Does the Constitution allow a quiver of fear to become the quilt around the bodies of her citizens, in the intimacies which define their identities? If there is only one answer to this question, as I believe there is, the tragedy and anguish which Section 377 inflicts must be remedied.

5. The Constitution brought about a transfer of political power. But it reflects above all, a vision of a society governed by justice. Individual liberty is its soul. The constitutional vision of justice accommodates differences of culture, ideology and orientation. The stability of its foundation lies in its effort to protect diversity in all its facets: in the beliefs, ideas and ways of living of her citizens. Democratic as it is, our Constitution does not demand conformity. Nor does it contemplate the mainstreaming of culture. It nurtures dissent as the safety valve for societal conflict. Our ability to recognise others who are different is a sign of our own evolution. We miss the symbols of a compassionate and humane society only at our peril. Section 377 provides for rule by the law instead of the rule of law. The rule of law requires a just law which facilitates equality, liberty and dignity in all its facets. Rule by the law provides legitimacy to arbitrary state behaviour.

6. Section 377 has consigned a group of citizens to the margins. It has been destructive of their identities. By imposing the sanctions of the law on consenting adults involved in a sexual relationship, it has lent the authority of the state to perpetuate social stereotypes and encourage discrimination. Gays, lesbians, bisexuals and transgenders have been relegated to the anguish of closeted identities. Sexual orientation has become a target for exploitation, if not blackmail, in a networked and digital age. The impact of Section 377 has travelled far beyond the punishment of an offence. It has been destructive of an identity which is crucial to a dignified existence.

7. It is difficult to right the wrongs of history. But we can certainly set the course for the future. That we can do by saying, as I propose to say in this case, that lesbians, gays, bisexuals and transgenders have a constitutional right to equal citizenship in all its manifestations. Sexual orientation is recognised and protected by the Constitution. Section 377 of the Penal Code is unconstitutional in so far as it penalises a consensual relationship between adults of the same gender. The constitutional values of liberty and dignity can accept nothing less.

2 These terms as well as terms such as “LGBT” and “LGBTIQ” used in the judgement are to be construed in an inclusive sense to include members of all gender and sexual minorities, whose sexual activity is criminalized by the application of Section 377 of the Indian Penal Code, 1860.