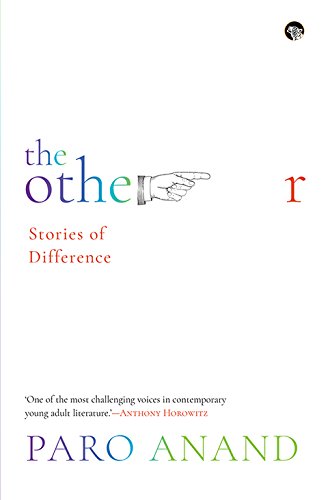 The Other, is a collection of short stories about young adult on the margins. The following is an excerpt from the short story  “Because Superman Has Better Things to Do” of the book.

There was a new gymnasium being constructed. The teachers were all away in a meeting. Raghu and his pals pushed me to the construction site. There was a bowl of cement or something lying there.

‘We pay your school fees, Miss EWS, you’d better put in some contribution yourself.’ They had been calling me Miss EWS for some time now.

Economically Weaker Section. Poor. Yes, that was me. I was poor. Not that poor, but I didn’t have the kind of home, clothes, colour pencils or cars, or any car at all, like the others had. I knew that I had got into this fancy school on the EWS quota. The government had forced schools to admit children like me. The schools probably didn’t want to admit us because we took up a seat that would have gone to a paying student. But it became a law and, so, here I was. But students like Raghu didn’t like it. They felt as if they were having to pay our fees. I don’t know if this was true or not. In any case, it was his parents who paid his, not as if he was having a hard time himself because I was a student in his class. But he liked to make me feel inferior and like I didn’t belong. And I didn’t. Not really. But there was a law and why should I not take advantage of that and study where they studied? It would be one thing if I was wasting the chance by not studying. But I was working really hard, concentrating really well and going for after school tuition for English and Maths like I was supposed to. I was working much harder than Raghu was, I’m sure of that. Yet, he felt he had more of a right to be here than I did. And now I was standing in the construction site.

Anshu was trying to lift a platter of cement.

‘Ughhh! It’s dirty,’ he squealed. Raghu’s grin became even wider. He loved seeing anyone at all in any kind of problem. Even if he was a friend.

Raghu pulled at my arm. His fingers, hurting, dug into my skin.

‘Right, Miss EWS, it’s payback time. Got it? We pay school fees for a labourer, you need to put in some labour yourself.’ He pushed me towards the bowl of wet cement. I didn’t know what he wanted me to do. I knew it was going to be something horrible, but I didn’t know what. So I just stood there.

‘Try not to look as dumb as you are. At least try and put some intelligence into your stupid face.’ I still didn’t know what he wanted. I would do it if I knew. Anything to finish this. Anything to let him get his fun out of it and then be on his way. His gang sniggered. I could see Manu was trying to laugh, but he wasn’t really finding this very funny. Good, there was some good in at least one of them.

I stared at Manu. If I could make contact with him, maybe he would stand up for me. But he was looking studiously away as though there was something hugely interesting in the bushes that shielded us from view. I wished Superman was real, that he would somehow show up and flatten Raghu and his gang to the floor.

‘Pick it up,’ Raghu commanded, pointing at the bowl of cement. Okay, I thought, fine, I’ll just do what he wants and get over with it. I bent over the bowl, I tried to pick it up. I didn’t mind the dirt. But as I lifted, I realized that the bowl was much, much heavier than it looked. I tried again, but I couldn’t even lift it one inch off the ground. I wished I could, I wished I had Superman with me. I would have lifted it with his help and dumped the whole bowl onto Raghu’s stupid head. I would have the last laugh.

But obviously, Superman had better things to do than hang out and help a poor girl. Superman was off saving lives and this was just a tiny blip on his radar. Look, I am not that stupid, I knew that there wasn’t really a Superman, I knew that he was just a comic book and sometimes a movie character, though I’d never seen his movies. I knew that. But somewhere, thinking that I had him by my side gave me courage. Gave me a buddy who would be there when I needed him. I needed him right now. I needed him more than I had ever needed anyone. Or anything. But he was off, being a comic book hero. And I was on my own. I had to be my own Superman. Or Superwoman. Or just be brave. Really.

Paro Anand is a Bal Sahitya Puraskar winner. She has written books for children, young adults and adults. She has been awarded for her contribution to children’s literature by The Russian Centre for Science and Culture. Her other works include No Guns at my Son’s Funeral, The Little Bird who held the Sky up with his Feet, and Wingless.

This is an extract from ' The Other' published by Speaking Tiger, 2018. Republished here with permission from the publisher.