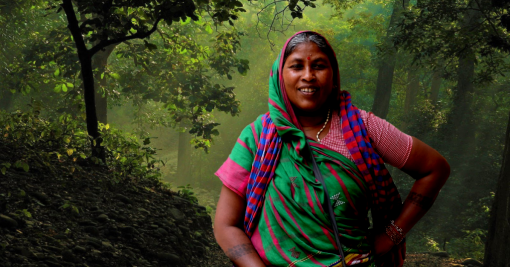 It was the second hearing of the Habeas Corpus Petition filed for the release of Forest rights movement leader Sukalo Gond and Forest Rights Committee (FRC) secretary Kismatiya Gond from illegal incarceration, and both couldn’t be traced and weren’t produced in the court either.

In a startling ‘disclosure,’ the Uttar Pradesh (UP) state government said that on July 9, the two women were supposedly given a ‘challan’ for a Section 151 offence by the police and released soon after. It appears that at first the government made efforts to get the hearing postponed but when the lawyers for the petitioners expressed their concern for the life and safety of the two women, it finally made the shocking disclosure ‘On Oral Instructions.’ The lawyers have reported that no details for the 151 challan were provided, nor the details of their ostensible release shared. Advocate Farman Naqvi, appearing for both the women demanded, “We need this to be put on an affidavit” as they are not traceable for over a month after their clandestine arrests on June 8.

Section 151 is a common enough 'offence' put on peaceful protesters. It relates to the 'continued assembly of five or more persons after 'orders' for their dispersal have been given.

CJP, with the All India Union of Forest Working Peoples (AIUFWP,) had moved the Allahabad High Court seeking the immediate production and release of the illegally detained Adivasi women leaders, Sukalo Gond and Kismatiya Gond. Sukalo Gond (Treasurer of AIUFWP) and Kismatiya Gond (Secretary, Forest Rights Committee), were arrested in a clandestine manner from Chopan station, Sonbhadra, UP just as they were returning after a meeting with the state forest minister, Dara Singh Chauhan and the Forest Secretary in Lucknow on June 8.

The full petition can be read here.

This is not the first time that Sukalo Gond has been arrested. In June 2015, when the Forest rights movement was gaining momentum in Sonbhadra, the state had resorted to violence to crush the peaceful protest of people against the Kanhar dam in a brutal and bloodied manner. Sukalo had that time recalled, “18 rounds were fired right in front of my eyes. It was terrible. They arrested almost all the women leaders including Rajkumari immediately.” She added, “I had no option but to run away, they were arresting everybody.”

Sukalo was arrested in the wee hours of June 30, 2015, along with Roma and sent to Mirzapur jail. However, this couldn’t break this courageous leader. She continued her struggle within the four walls of the prison. She, along with other inmates, wrote multiple letters to authorities and sat for hunger strikes to demand basic facilities as well as land rights outside.

More recently, Sukalo was particularly perplexed about how the state was treating the Adivasis in Lilasi village. First, the UP police picked up and detained Adivasis from Lilasi and made them go through harrowing procedures for about a day, on May 18. Later, on May 22, they entered the village, completely unwarranted and assaulted women and children, in which Kismatiya Gond had sustained severe injuries. Sukalo was constantly highlighting how the village was turned into a police camp. Bulk FIRs were filed against the villagers on the pretext of an “afforestation project,” the details of which wasn’t known to anybody! Even though Sukalo wasn’t present during the episodes of assaults by the police, and her name was nowhere mentioned in the FIRs, she was arrested from Chopan station on June 6 in and clandestine manner, ironically, when Kismatiya and her were returning after meeting the state forest minister, Dara Singh. Dara Singh had assured them to look into the matter seriously.

Sukalo was the link between these villagers and others outside the area trying to help. These villages are located in the far-off interiors and not even well connected by roads. Mobile phones are scarce. Arresting her is a clear method to intimidate these fierce Adivasi women so that they stop speaking up.

Lately, the repressive measures of the government have been especially stepped up. This, activists believe, has been in the background of increasing awareness on forest rights in communities across UP. On March 23, community resources rights claims were filed by the Adivasis. Similarly, on June 29, more than a thousand Adivasis from eight Gram Sabhas in Chandauli district of UP filed community resources rights claims to forest land under the FRA, 2006.

On AIUFWP and CJP’s intervention, the NHRC had issued notifications to the DM of Sonbhadra to look into the violent onslaught of UP police and forest department.  However, the feudal nexus of the Government, the forest department and big landholders is carrying on its oppressive onslaught with impunity.

In such grim circumstances, it becomes especially important for all democratic rights voices to ask, where are our leaders Sukalo and Kismatiya? The fierce women who are leading the forest rights movement in UP from the front!