This is a short extract from the introduction to the book Ambedkar and Other Immortals: An Untouchable Research Programme (Navayana, 2018). Choudhury, here, reignites the debate over the appropriation of Ambedkar. Amidst rising echoes for Ambedkar-Marx, Ambedkar-Marx-Bhagat Singh, Ambedkar-Marx-Gandhi-Bhagat Singh, he provocatively asks us to think of Ambedkar’s singular exceptionality. “[T]he question”, he says, “is not what tactical common ground can be found among great world-historical thinkers; the real question is, which is the exact measure of a thinker’s singularity, her exceptional, even factional, position from where an arrow can be shot in another direction with no calculable target apart from a new vital wound of thinking?” 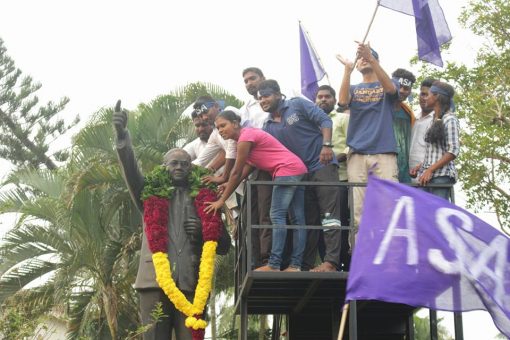 Let me clarify that when I speak of a certain factional integrity in the contemporary movements of reading Ambedkar, I do not enthuse over an Ambedkarite orthodoxy. Quite the contrary.

The milieu I invoke is characterised by a heterodox vitality. What do I mean by that? Well, the best lead is afforded by the word “association” as it features in such names as Ambedkar Students Association (ASA) in Hyderabad Central University (HCU), which today is at the crossroads of a new political vitality and renewed institutional violence.

“Association” was a word Ambedkar repeatedly affirmed to convey a kind of generic definition of politics as collective life of association.1

People enter into associational activity not because they belong to the same family, caste and nation but because they share new “common feelings” at the risk of disaffection from given forms of belonging. This disaffection is not mere wilful sedition; it is the result of encounters with others, other affections, other ideas and paradigms of thought that produce a type of fraternity with strangers.2 The condition for this fraternity is clearly the freedom to encounter others in their strangeness—but it is also the unforeseen contingent possibility of sharing in a common egalitarian utterance. “Common feelings” are the same as a new form of heterodox common speech. So the question arises, which are these forms, these alliances and ‘mixtures’ that groups such as the ASA are entering into? This is a tricky question since interested parties jump at the first opportunity to indict, “Look, these groups are not even able to retain their factional integrity… even their pure dalit status because they fraternize with and are corrupted by anti-nationals who love Afzal Guru and Yakub Memon…”3

“Pure dalit”? This brahminical oxymoron of the recent patrons of Ambedkar apart, the Ambedkarite associations also take care to set the record straight. In effect, they are saying: “Don’t take it for granted that the Left is our natural ally and we accept that relationship either historically or theoretically. Everything has to be tested.

There is nothing to guarantee that the encounter with the Left will not be a bad encounter. Even the encounter of the two masters, Marx and Ambedkar must be tested in the situation of history and the constellation of thought.”4

It is interesting to note that in contrast to the affirmative scepticism of the Ambedkarite association(s), the Left, which over the years has read Ambedkar and the caste question restrictively and poorly, exactly like the brahminical centrist parties starting with Congress and the fanatical Hindu parties BJP downwards, sings the pain and glory of a pure dalit subject today. It proposes new theoretical configurations—Ambedkar-Marx, Ambedkar-Marx-Bhagat Singh, Ambedkar-Marx-Gandhi-Bhagat Singh … that still don’t address the fundamental point: the question is not what tactical common ground can be found among great world-historical thinkers; the real question is, which is the exact measure of a thinker’s singularity, her exceptional, even factional, position from where an arrow can be shot in another direction with no calculable target apart from a new vital wound of thinking?

It is more or less settled that the Left has no new arrow to shoot—but is it within their capacity to receive a new Ambedkarite wound? This is what the ASA and others are asking.

1. Ambedkar’s linguistic map of collective political dispositions determined by generic human sociality will concern several of the chapters of this book. Between Castes in India (1916) and Annihilation of Caste (1936) not only does a substantive common project of thinking caste out of existence obtain but also an affirmative project of egalitarian linguistic creation. One such creation is the word “association”. Again, for all the influences underlying Ambedkar’s ‘decision’ on words, the annotated edition of Annihilation of Caste (2014) is invaluable.

2. This point will return in the course of the book. The topical interest of the point is that in recent scholarship there is a tendency to prioritise the importance of fraternity over liberty and equality for Ambedkar. The form of life which is correlated to fraternity is mostly religious and specifically Buddhist in relation to Ambedkar. This settled nature of the preference completely overlooks the experience of shock that underlies all real fraternity because the latter happens as a result of unforeseen historical encounters that ‘force’ new dispositions, new ‘uses of bodies’ on behalf of all the subjects of these encounters. Religion including Ambedkarite Buddhism is a new and unforeseen form of life or ‘use of bodies’, not a pre-given prototype of fraternity. See Agamben, 2015.

3. This is the essence of the initial incitement by Union Minister (of Labour and Employment) Bandaru Dattatreya when he wrote to the Ministry of Human Resource Development about the ASA’s reaction to Yakub Memon’s execution on 30 July 2015 (Ravishankar, 2016). This is an incitement to state and social paranoia that from then to the present has worked like an endless bad dream. The cold-blooded logic setting up the game of delusion is to deliver the following argument to the public: “Dalits are supposed to be self-enclosed, if unfortunate, victims of some social problems. How can they get ‘mixed up’ with other issues, which is none of their business? In which case, they must be nursing impure non-dalit agendas…”

4. As an important representative text of Marxist reading of caste within the history of the Indian Left, see Ranadive, 2002.

Soumyabrata Choudhury is Associate Professor at the School of Arts and Aesthetics, Jawaharlal Nehru University.