The Repellent “New” Idea of India at Work 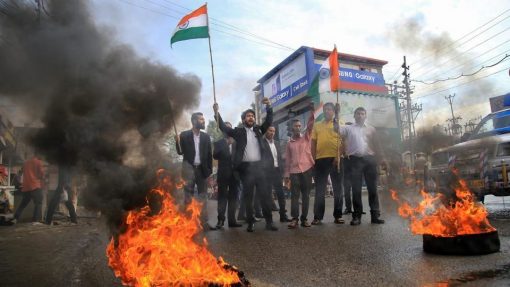 That Asifa’s abduction, rape and strangulation, a particularly gruesome crime, aroused a virulent response from Jammu High Court Bar Association, as well as the Kathua Bar, in the name of “sentiments of the (Hindu) people”, invites attention to a phenomenon which has long been there but rarely acknowledged. The case was investigated by the SIT constituted and supervised by the High Court of Jammu and Kashmir, when J&K police bungled the initial investigation, in lieu of money according to the charge-sheet. The Chief Judicial Magistrate of Kathua was reluctant to accept the charge-sheet and relented only after five hours when orders were issued by his superiors. All this went on while the Hindu Ekta Manch supporters had a field day staging protests inside the Court premises unhampered by the J&K Police. There were no preventive detentions, lathis charge, tear gas, pellet guns and guns, which is the norm in Kashmir. And now comes the news that the authorities are going to appoint Sikh prosecutors to ensure that Hindu-Muslims divide does not widen. In other words, starting from January 23 when HEM was formed by RSS supporters to now, this vicious campaign was allowed a free run. No police force displays such generosity towards people protesting atrocities and persecution as they do towards rabble-rousing Hindutvawadis for imagined “hurt”.

The High Court and local Bar's demand of handing over the matter to CBI rested on the argument that gruesome abduction, rape and killing of the 8-year-old Asifa ought to be investigated by Hindu police personnel, because SIT’s credibility is suspect as it comprises of more Muslim personnel in the team, was led by a Muslim police officer and which then pinned the blame on eight accused all of them Hindus, including four police personnel. The High Court and local Bar Association could carry on with their vituperative campaign, strike call, ‘bandh’ etc because they enjoyed the patronage of Jammu-based BJP, Congress and the National Panthers Party as well as BJP ministers in the state and at the Centre, especially the Minister in PM Office Jitendra Singh. Lending legitimacy to the demand for CBI inquiry the Minister in PMO reportedly said on February 22 that “If people feel that they do not have faith in the police or crime branch investigation and the case needs to be handed over to the CBI, I don’t think, there is any problem in handing over the case to the CBI”. But why carry on with the protest when charge-sheet has been filed and the veracity of the evidence presented by the SIT will be determined during the trial. Samar Halarnkar writing in Scroll.in [12/04/2018] is right when he says that India is being pushed into becoming “an apartheid state, a Hindu Rashtra where the Hindu has first claim to everything”, and evidently want the criminal justice system to favour them.

The sight of remorseless ‘Hindutvawadis’ waving the tricolour flag and mouthing abuse & provocative slogans, indulge in arson, plunder, molestation and even lynching in the name of “Gau Mata” or “Bharat Mata” or some imagined “hurt” represents the new ‘normalcy’ manufactured by pseudo-patriots of ‘Sangh Parivar’. That these luminaries of Hindutva in Kathua have been covering their crimes using the national flag to agitate in favour of perpetrators (which included four police personnel) of heinous crime against a girl child, promote ethnic cleansing by ridding Kathua district of Muslims and can carry on their murderous politics, is evidence of the official patronage and clout they enjoy. That the Union Government and its security apparatus still point fingers at Muslims of Kashmir and ignores the danger posed by Hindutvadis, illustrates that the religious radicalization Indian Government focuses on studiously ignores the radicalization of Hindus and the vicious politics they engage in India and in particular in Jammu.

In the aftermath of 1947 massacre of Jammu Muslims by the Dogra Maharaja’s troops, backed by RSS and the Akali Dal, the emergence of Sheikh Abdullah, led National Conference to power in 1947-48. The agitation by the Praja Parishad and then Jana Sangh was a thinly disguised attempt by the old ruling class under Dogra Rule (1846-1947) to retrieve what they had lost with the demise of the kingdom. In the process, they kept alive the communal fault-lines in J&K, while claiming to be represent the “nationalist force”.

These faultlines got exacerbated in mid-1990’s when Village Defense Committees were set up in Doda and Kishtwar comprising 95% Hindus as Special Police Officers mostly drawn from Bajrang Dal and Shiv Sena. They still function and carry weapons. Lest we forget the entire Jammu and Kashmir Division has been declared as “Disturbed”, with extraordinary powers provided to the soldiers under AFSPA andto the police force. The charge-sheet filed in the Kathua case speaks of the crime meant to terrorise Muslims to vacate Kathua, which in a “disturbed” area would have invited extraordinary laws to be invoked. Not in this case. Although in border/LOC areas, sedition charges have been filed byJ&K Police on migrants for merely condemning the BJP government and PM Narendra Modi for betraying the border residents! Likewise, there are severe restrictions onownership, use and display of arms, being a "Disturbed Area". However, in Jammu, the Army itsel fhas held weapon training camps for Bajrang Dal and such rabble-rousers. Authorities have also allowed Hindutvawadis to carry and publicly display weapons under the name of religious ritual. In a manner of speaking for the 'Hindutvawadis "Disturbed" conditions has been an enabling condition for self-perputuation whereas for the rest of the population encumberances and restrictions are the norm, their constitutional Freedoms virtually suspended.

In 2008 too, Jammu surpassed itself by emerging as the centre for regressive ideas and promoted not only hatred and hostility towards Kashmiri Muslims, including of imposing economic embargo (an act of war under International Humanitarian Laws), targetted on the "National Highway' anyone they suspected of being a Kashmiri Muslim. Then too, Hindutvawadis carried national flags, while they committed crimes. Lest we forget, in 2008 the only criterion for Lt General (retd) S K Sinha and also for Governor of J&K, to characterise the agitation in Jammu as “nationalist” and the one in the Valley as “anti-national” was because in Jammu “agitators have been carrying (the) national ﬂag” whereas in Kashmir “they have been carrying Pakistani (actually they were green) ﬂags”. The then National Security Adviser, M K Narayanan, not to be left behind, opined that security forces could not accept the Indian ﬂag being abused by the agitators in Kashmir. However, then as now neither the sentiments of security forces nor the Government apparently got “hurt” when rape, lynching and plunder were carried out or being carried out by flag waiving criminals. So the subtle message to Hindus is that all will be fine if they commit heinous crimesso long as it is carried out in the name of “nationalism” and they keep waiving national flag. Unsurprisingly, this denigration of the tricolour goes on without anyone finding anything wrong with it. One wonders if the ‘sangh parivar’ which always derided the tricolour and wanted saffron colour as national flag now encourages its rank and file to carry the tricoulr flag to terrorise people, a clever way to demean and abuse the tricoulur they never wanted?

As in 2008 so even now the authorities treat agitation by Hindutva groups with kid gloves. Security Forces always claim that they use force as per the scale of provocation. What the forces do not say, however, is that while they used live bullets and pellets on the protesting civilians in Kashmir, they handle rioters gently in Jammu. Notice that none of the leaders of Hindu Ekta Manch was prevented from carrying on with their campaign in defiance of Public Order and clearly aimed at impeding the course of justice. They were inciteful which invites registering a complaint and possible arrest. Contrast this with Kashmir where at drop of a hat Kashmiri protestors are subjected to bullets, pellets, tear gas, lathicharge, detention, roughed up or tortured, booked under dreaded Public Security Act for years on end or accused of cognisable offence with years of gruelling trial. After such display of partisanship, there ought to be nothing surprising about what is taking place in Jammu where Hindutvawadis have had a free run.

So the point is we can continue to live in a state of denial and pretend that the problem facing India in J&K is radicalisation of Muslims inspired by Pakistan, when we are reminded again and again of the demon in our midst in the shape of Hindutva. This officially patronised 'nightmare' that is India, has been long in making. So we have no one else but ourselves to blame for ignoring this for far too long. Now that its there for all to observe its 'naked glory', it is time we connect the dots and see the reality for what its is being turned into.