Higher Education in India is at Risk

Education has been an important concern since independence. Several policies and programmes have been introduced, meant to improve the existing scenario of education, by the Government of India.

Since the modification of the National Policy on Education, there have been many innovative transformations in the social context of education. The New Education Policy, 2016, aims at addressing the unfinished targets of the earlier education policies, keeping in mind the rising challenges in the education sector, and the development of the nation. The process of education has expanded from the spatial realm of the classroom to electronic and print media resources, e- books and e-journals, and various other forms of non–institutionalised sources of knowledge. The New Policy on Education has been charted out with quite a few laudable goals and strategies to smoothly integrate education with multiple agencies and other government departments in the digital era.

Although every policy is charted out with ambitious plans and goals, the devastating truth today is that higher education is at stake, with the vice chancellors — who should have been ceremonial torchbearers working towards these goals — themselves being accused of corruption and maladministration.

The recent arrest of the Vice Chancellor of the Bharathiar University, A Ganapathi, in Tamil Nadu, is the latest as far as corruption charges are concerned, but it cannot be dismissed as simply just another case of corruption, one among many in the country.

The former Vice Chancellor of Tamil Nadu Agricultural University, P Murugesa Bhoopathi’s offices were searched by the Directorate of Vigilance and Anti-Corruption in 2016, and he was presented before the special court for vigilance and anticorruption charges. The Lucknow Bench of the Allahabad High Court had summoned Prof Ranveer Chandra Sobti, the Vice Chancellor of Babasaheb Bhimrao Ambedkar University in Lucknow, on charges of corruption in appointments in December 2017 (Hindustan Times dated 20.12. 2017).

The former Vice-Chancellor of Vidyasagar University, West Bengal, Swapan Kumar Pramanik, was charged with misappropriation of UGC funds (The Statesman dated 28.8.2012); reports published in the media labelling him as a ‘Leftist Vice Chancellor’ spoke volumes of his political affiliations. Since political interference is an important determinant in the appointments of Vice Chancellors, it becomes an opportunity to either exploit or retaliate, on occupying the most coveted chair in academia.

The Ministry of Human Resource Development (MHRD) had labelled Pondicherry University as one of the “non-performing” universities because the university had been functioning without a Vice Chancellor. Corrupt practices in the university were followed up with the dismissal of its former Vice Chancellor, Chandra Krishnamurthy, in 2016. It is a well-known fact that there are several infrastructural issues like providing hostel accommodation for outstation students, quality of food and sanitation facilities in hostels.

Even if we dismiss other infrastructural requirements in a university, it is so disconcerting to know that a sum of as much as 60 lakh rupees has been spent solely on taking legal opinions to handle cases in various charges against the administration. A statistical study on the escalating rate of corrupt Vice Chancellors highlights the deteriorating standards in higher education.

The situation is such that an enthusiastic researcher feels worthless even after qualifying the National Eligibility Test for Lectureship, as most of the state-run colleges do not pay UGC scales for teaching. The advertisements for permanent posts do not guarantee a position despite their achievements and a good interview. Nepotism in appointments no longer spoken of in hushed tones in colleges and universities. This practice, instead, has become the “norm” in the selection process for posts. This situation not only dampens the spirit of those desiring to be in the teaching community but increases the tendency to enter the corporate sector.

While this is the ugly reality of the administrative and employment scenarios in some of the state-run colleges and universities, almost half of the total strength of teachers in some of the colleges affiliated with the Delhi University (DU) — a Central university — are employed on an ad-hoc basis. This rampant method of ad-hocism, which has been going on for about a decade now, is a crucial struggle in the groves of academia. For permanent teachers too, promotion interviews are delayed,, and there is a lack of uniformity in granting them. For instance, some departments were granted promotion on the condition that his or her promoted status will be valid on fulfilling eligibility conditions such as participation in orientation/ refresher courses; whereas some departments in the same university had refused to interview teachers who did not fulfil these conditions but were due for promotion. DU’s delayed decision to initiate the recruitment process, and claim that it did hold interviews, shows significant shortcomings in its administration. 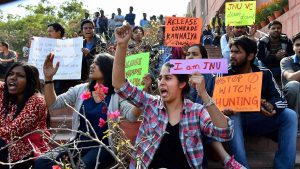 It is heart wrenching to see a university like Jawaharlal Nehru University (JNU), which has been an epitome of collective dream for aspiring researchers, too has been plagued by the political leanings of those in power, especially the Vice Chancellor, Mamidala Jagadesh Kumar.

The proposal to impose compulsory attendance, especially when the present pedagogy works fine, is worth questioning. JNU gives its students complete freedom and responsibility to govern themselves, and instilling self-reliance in them.

The university inculcates an interdisciplinary perspective; students from one discipline can audit or credit a course from other departments, depending on their area of interest. It believes in enhancing creative and critical thinking and an emphasis on inter disciplinary discussions broadens such thinking, with deep sensitivity towards societal issues.

A classroom filled with students, some even seated on the floor, during special lectures or talks is an overwhelming evidence of the absolute joy of learning. The central library remains open for its students throughout the night. The hostel messes after dinner are used as platforms for invited talks or dialogues, with discussions on every debatable issue in the society. It makes one sensitive and aware of the oppression and social inequalities, and encourages one to stand and fight against them. It is sad that our university systems demand colonial regimentation, like compulsory attendance, in the name of able administration even in post graduate universities.

JNU is a place that nurtures differences, but still makes one feel like one belongs there; it doesn’t come with the burden of linguistic hegemonisation. The teacher–student equation is built on mutual trust and cordiality, unlike many such relationships which legitimises an epistemic hierarchy. The beauty of JNU is that it makes you, effortlessly, learn social justice and humanism and work for a world without borders. There are many defining moments which make you marvel at the visionary Gopalswami Parthasarthy, the first Vice Chancellor of JNU, who first sowed the seeds of the discourse on democracy that JNU still follows.

For a long time, now, education has been seen only as a source of empowerment for those on the other side of the binary opposition — women, disabled, students from disadvantaged sections of the society, those from extremely deprived backgrounds, people with a differing gender expression than their assigned ones, etc. In the current situation, of administering using political ideologies or corrupt practices to commodify education with alarming rapidity, is a time for us to confront the question, “To whom does the future belong in this country?”

V Deepa is an Assistant Professor in the Department of English, Shaheed Bhagat Singh College, University of Delhi, New Delhi. She completed her Ph D from Jawaharlal Nehru University on the politics of education in postcolonial Indian English campus novels. Her research interests are Higher Education, Gender and Literary Theory.
<