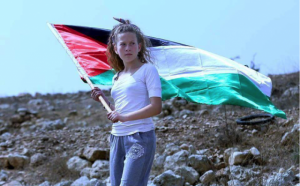 “Do not worry Ahed, we will see joy again and celebrate as we always have. I hereby promise, your brothers and I will stand at the gates of prison and sing for you and your mother’s freedom. We will demand the freedom of all those imprisoned unjustly; we will demand freedom for all free spirits. And you and your mother will sing with us, and pound on the prison walls with your mighty power.”

Bassem Tamimi wishes his daughter Ahed on her birthday.

On 31st January, 2018, Ahed Tamimi turned 17 while in military detention. An Israeli military court extended her and her mother Nariman Tamimi’s detention till 6th February a day before Ahed’s birthday. They were detained following the surfacing of a video where Ahed slapped an Israeli soldier for barging into her house. This was soon after Israeli forces had shot her cousin, sending him into a coma. They will be held till the end of their trial, Ahed risks up to 10 years of imprisonment.

The Tamimi family, along with the rest of the Palestinian community of Nabi Saleh village have for generations been at the forefront of the struggle for freedom and justice. They are well aware that they are being adjudicated by an Israeli military court, tasked to guarantee their oppression. Ahed has been interrogated without a lawyer or her parents, held up in isolation in cold prison cells, shifted around prisons including taking her out of occupied Palestinian territories- the list of war crimes goes on.

Failing to deter her spirit, Israel has gone on an all-out war against the family and community, enforcing a collective punishment. At the beginning of the year four women of Ahed’s family – herself, her mother, aunt and her cousin – were imprisoned. Her 17-years old cousin being shot dead by Israeli forces. Ahed is among the 350 children currently under Israeli detention.

The systemic nature of Israeli oppression has particularly exposed women: Over 500 of Palestinian women have been killed by occupying forces since 2000. They face routine abuse and harassment by the Israeli occupation forces and settlers alike. Their very ability to give birth is under attack as it is targeted as a ‘demographic threat’. The Israeli Minister of Justice, Ayelet Shaked, called for Palestinian mothers to be killed, as “more little snakes will be raised there (in their homes)”. In 2014, a professor at Bar-Ilan University, Dr. Mordechai Kedar, said in a radio program that the only thing that would deter our people from struggling for their rights “is if they know that their sister or their mother will be raped in the event that they are caught”.

Israel is trying to make an example out of Ahed and her family. But they really are a shining example of the courage and resilience- the sumud– of Palestinian resistance. This is the 70th year of the Nakba- the ethnic cleansing of over half of the Palestinian people to establish the state of Israel. Israeli occupation, apartheid and colonization of Palestinian lands and people has been built on inhuman violence and gross violation of human rights and international law. Israel has effectively taken control of 87% of Palestinian land, keeps the Gaza Strip under a brutal military siege for over a decade and builds an up to eight meter high cement Wall around Palestinian communities in the West Bank to steal their water and land, the illegal settlements in occupied territories are increasing. In the face of this, the Palestinians have put forth a lesson in resistance for the world to see. They have consistently broken the cynicism that Israel’s regime, in collaboration with regimes across the world, have tried to entrench.

We, from the Indian women’s movements, salute the struggle for Palestinian freedom and stand in solidarity with Ahed, Nariman and Noor Tamimi. We demand their immediate release and urge movements across the world to raise this demand. The Indian women’s movements have fought against the deeply hierarchical systems of patriarchy, caste, class and religious divide that our society faces. We understand all too well what militarized patriarchy looks like in everyday life. Our struggle for freedom and justice for women and all oppressed sections of our society is built upon solidarities.

In 2005, a broad coalition of Palestinian women’s organizations, trade unions, political parties and civil society organizations came together to give the call for boycotts, divestment and sanctions (BDS) against Israel till it respects Palestinian fundamental rights and complies with international law by dismantling its Wall and settlements, ending its occupation, granting Palestinian citizens of Israel full equal rights and the Palestinian refugees their internationally sanctioned right to return. On 8th March 2016, over 40 Palestinian women’s urged women, feminists, women’s organizations and collectives across the world to join the call to BDS, reminding us that ‘justice is always a feminist agenda’.

We, the undersigned, demand the immediate release of Ahed Tamimi and all Palestinian child prisoners. We further believe that the strongest way to support Ahed’s struggle and the Palestinian quest for justice, freedom and equality is to support the BDS movement.

Israeli impunity is built on collaboration of corrupt regimes, and it will be dismantled by the unity of grassroots struggles across the world. Palestinians are leading us by example. We must give shape to our solidarity in the form of the concrete and effective BDS efforts

Boycotts were an essential part of our own struggle against colonialism, they brought down the South African apartheid regime, and they will break the back of Israeli colonization, occupation and apartheid. We stand in vigil, demanding justice for Ahed. We urge women’s and other grassroots movements in India and across the world to do same. As Ahed braves Israeli prisons, we must send her a resonating message of support and love. Let that message be one of resistance, of people’s power and of BDS.

International Association of Women in Radio and Television, India Chapter