No Result
View All Result
in Videos, Sangama 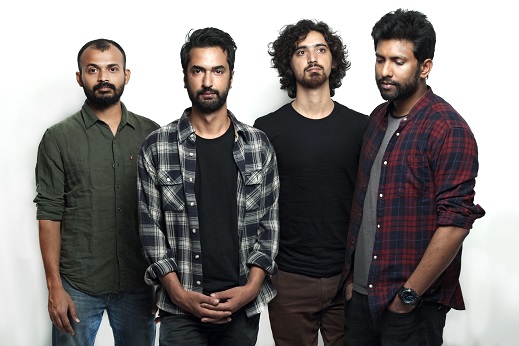 “So, you want to know how it started? The band began with Khalid and me — we went to kindergarten together,” said Mir Kashif Iqbal, the lead guitarist of the band Parvaaz. He was tired (they had just landed in Delhi and reached the hotel), and, from his voice, it was clear to us that he had narrated this story umpteen times to various journalists. Iqbal was joined by Khalid Ahamed, the lead singer; Fidel D’ Souza, the bassist; and Yama, their manager. Sachin Banandur, the drummer, had fallen ill from all the travelling — December is clearly a busy month for indie bands — and we felt that he could, for once, prioritise his nap over two curious listeners. They had come to perform at Jashn-e-Rekhta — the annual festival in Delhi that celebrates the Urdu language.

A couple of hours after we met them, they took the stage and began their set with “Gul Gulshan”. One of Parvaaz’s most popular songs, and the one they generally open their live performances with, “Gul Gulshan” is a poem written by the twentieth century Kashmiri poet Ghulam Ahmad Mehjoor.

The poem is an invocation to the gardener to come sow the land with a new spring: “Walo ha Baagwano/ Nov bahaaruk shaan paida kar” (Come forth, Gardener/ Create a magnificent new spring). But the invocation is not a moment of straightforward optimism accompanying a new venture. The opening lines soon give way to lament as Mehjoor describes the garden: “Chaman varaan, wadaan shabnam/ Tchatith jamae, pareshaan Gul/ Gulan tay bul gulan andar, dubaray jaan paida kar (The Garden is desolate, the dew weeps/ The flowers have their robes torn; they are distraught/ In those lifeless flowers and songbirds, create new life again).

Parvaaz takes this poem as material for their music, and, if one attends any of the live performances, one would feel, they also answer Mehjoor’s plea. This is exactly how we felt as we watched them begin their set at the Jashn-e-Rekhta festival in Delhi. Khalid Ahamed’s voice is both a prayer for the “pareshaan gul”, and, by the time they reach the song’s conclusion, a granting of that prayer. Ahamed’s voice carries the intensity that their guitarist Mir Kashif Iqbal’s notes generate in the lead as he sings:

By the time the band finishes the song, one can visualise the new garden that Mehjoor had imagined and, as a result, also understand his anguish over the delay.

The song, like all songs, has its own story of making it to their LP, Baran. “This was the song that was not supposed to be in the album”, said Ahamed, as we spoke to the band before their performance. This, of course, took us by surprise, as the song represents so much of the sound that the band gets associated with, or, at least, the sound that the band used to be associated with in their album Baran: guitar riffs, followed by a stunning bass-line and drums, eventually leading to Ahamed’s vocals. “I first played the initial riff and structured the song. The lyrics were added later,” said Mir Kashif Iqbal. He was, however, quick to downplay the seamless perfection in the way the lyrics match the music. “It’s nothing new, several bands follow the process”, he said.

Their influences vary from rock n’ roll to blues to psychedelia. One would think that such a mix would bode well for earlier songs the band made, like Itney “Arsey ke Baad” (After so Long), co-written in Urdu by Ahamed and Kashif.

However, when their musical influences meets high modernist poetry in Kashmiri (like “Roz, Roz”) and Urdu, we know that the band has truly matured and come of age.

The band now performs “Roz, Roz” and “Baaran” together, a song they earlier called “The Long Song”. The seventeen-minute song, however, is a masterpiece; probably the best the band has come up with. It is also a track which shows how much Fidel D’Souza, the bassist, and Sachin Banandur, the drummer, mean to the music they create. It is tempting to compare the track with Pink Floyd’s “Shine on You Crazy Diamond”. Like that legendary track, now considered a landmark in contemporary music history, the song takes us through a variety of moods and rhythms. Listening to the song on your earphones is one experience, but it is quite a different one if one hears them perform it live. It is not unlike that of watching a play. One can literally feel a variety of moods as the song progresses, and travel from melancholy to longing to anger to moments of pure serenity that is almost, at times, eerie. 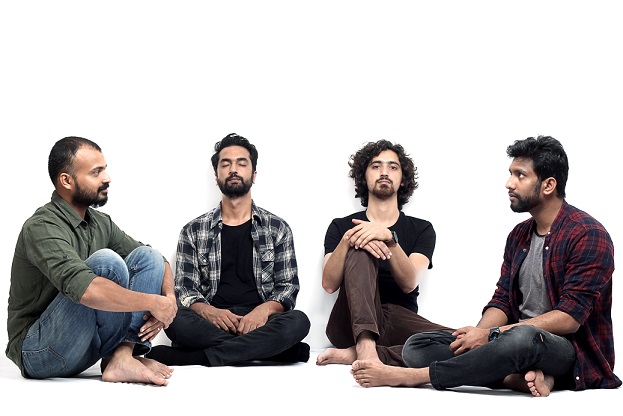 In an interview with Rolling Stone India, published in 2014, Banandur says, “We’re not really playing happy music, even though we are happy people.” “Roz, Roz”, however, the lyrics of which are another poem by Mehjoor, is the only song of the band that speaks of romantic love. Parvaaz makes this song their own, just as they do with their “darker songs”. Ahamed’s voice reveals its stunning range—often reminiscent of Robert Plant—as the haunting melody conveys to perfection the brooding melancholy of love that both hurts and heals when the lover asks the beloved to stay.

(Stay, listen to my torment, my beloved
I’ve lost all my peace with your affliction
You are the wrap to the wounds)

Before everything that “Roz, Roz” brings to life has even settled, we are taken to the masterpiece that is “Baran”. D’Souza and Banandur work like two magicians, or maybe two great midfielders in a soccer ground, lead us from one mood to another, as Ahamed and Iqbal join in as strikers to score the eventual goal. Parvaaz takes us from one emotional space to another within moments.

Listening to them on a chilly Delhi winter, we travelled with them at their command. It makes sense why their fans can be seen listening to them devotedly, singing out each word, whether it is in Urdu or Kashmiri (which many might not know always know). You shouldn’t be surprised if you are left breathless when the song ends.

In a lecture delivered in the Pink Floyd conference at Princeton University, Gilad Cohen, who is an Assistant Professor of Music at Ramapo College of New Jersey, spoke of the “emotional range” of the album “Shine on You Crazy Diamond”, as he also laid emphasis on the technical range of the songs.  Perhaps this emotional range can best be felt and understood if one watches the hour and half-long feature Transitions.

Directed by Gokul Chakravarty, Transitions was filmed at Jagriti Theatre in Bangalore. In the band’s official YouTube channel, this is how they describe the intent behind Transitions:

The average concert video today bombards our senses with fancy lights, camera movements and gimmickry while the average concert itself comes with its various distractions that, unfortunately, have not much to do with the performers on stage. The vision behind this concert—and hence the film—is to draw the viewer into the mood of the performance and provide an unadulterated gateway to the intimate and powerful visual and aural experience that can be a Parvaaz concert.

Indeed, the crowd can be seen to be instinctively clapping to a more funky part in the song which is almost reggae-like, and in rapt attention when Ahamed’s voice comes across as he sings, or rather screams, “Baraan”. In Transitions, the part-chronological placement of the songs gives a special richness to understanding the directions in which the band has travelled. Towards the end, we have “Ziyankar”, which the band does not play live too often; “Shaad”; and “Color White”, a single which officially released in May, 2017. As the performance transitions into the later songs, thematically they address questions of the self in the world.

“Ziyankar” is, both lyrically and musically, a song that distinctly stands out. It was also while talking about this song that we learnt of the crucial contributions of Umar Allaie to the music of Parvaaz.

“He is a friend based in Srinagar,” said Ahamed. We learnt that he regularly writes and contributes to the lyrics of their songs. To string together stanzas from Allama Iqbal’s classic poem “Shikwa,” and add his own words that matche the tune, can only be described as a mark of a consummate craftsman. “Shikwa” and “Jawab-e-Shikwa” are long poems written by Allama Iqbal. The poems are written in the form of a dialogue between Man and God. In the first one, “Shikwa,” Man submits his complaints to God. In the second, “Jawab-e-Shikwa”, God gives answers to the complaints. Allaie writes:

(Translated by the writers)

In “Ziyankar”, Allaie begins the song with Iqbal’s lines but adds his own. The result is a pastiche that you are unlikely to notice. It must be said, it is a task of brilliant ambition that perfectly suits Parvaaz, and delivers a lyrical, conceptual unity that only Parvaaz’s music could have done justice to.

Such experiments make Parvaaz’s music truly contemporary, and, if we may add, modernist.

Pastiche was one of the formal experiments in the arts and in writing, a tool employed both by the high modernists and the avant garde writers and artists. In that light, Parvaaz is a rooted as well as international, local as well as cosmopolitan, in their sound. The band may not know it, but they seem to take Ezra Pound’s “Make it new” dictum quite seriously. This is also why Parvaaz stands out from the otherwise quaint, and often boring, romantic remembering of the Urdu language that Jashn-e-Rekhta sometimes lapses into.  No wonder their official performance schedule described them as a band where “Urdu Meets Alt Rock”. Parvaaz had suffered the outrageous label of “Sufi rock” earlier, but we think that “Urdu meets alt rock” may haunt them for some more time. The band seems to be at peace on the question of labels. “Call us anything. Sufi rock, rock, progressive rock, Kashmiri; we don’t mind”, said D’Souza, trying very hard to conceal a smirk. In fact, it will not be too much of a stretch to say that Parvaaz turned  Jashn-e-Rekhta into Mehfil-e-Parvaaz.

We started our conversation with Parvaaz with the idea of learning about a band which is keeping Urdu alive, refreshing and contemporary, which they are doing in no small measure. But we came back with something more. They narrate each and every story behind a song with the refrain,“It fit together well”. Listening to them, it was clear to us that their own music, and the world it opens, continues to surprise them. It should not be a surprise for us to know that none of the four band members are formally trained musicians. “Sometimes, while recording in the studio, we are told no, that is wrong. You can’t do this. Since we don’t know if we are making a mistake, we have to correct them in the studio itself”, said Iqbal. If mistakes are what it takes to arrive at the sound they have discovered, we hope they continue to make a few more of them.

The Edict Project: Ashoka and Memory

Through Her Eyes: Cultures of Peace

byZubaan
No Result
View All Result