Ambrose Pinto: A God’s Man Who Walked the Talk 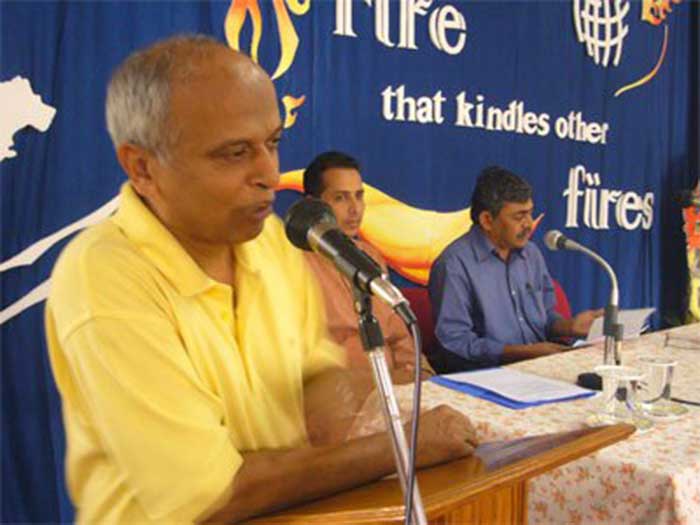 Ambrose pinto’s death after struggling with treacherous cancer for about six months on 3 January of 2018 made me feel that this year would be bad for Dalits. His smiling face, hopeful of change, keeps flashing through my mind.

I last met him when I gave a special lecture at Indian Social Institute Benuluru on January 20, 2017, in memory of Fr.Henry Volken S.J, who founded the institute. That evening we had dinner at Akar Patel, well known journalist’s residence. It was at that dinner I was supposed to meet with Gauri Lankesh also. But she did not turn up. The whole nation knows what happened to her later.

Ever since I met Ambrose in the early 1990s he impressed me and our friendship continued. He was a scholar with great concern for the poor, human rights and human dignity.

As director of ISI Delhi he converted that institute into place of pro-Dalit Bahujan activism, theory and social interactions.

Earlier and later as principal of St.Joseph evening college he turned that college into a totally reserved place of SC/ST/OBCs students by undercutting upper caste seats. The issue went to the Chief Minister of Karnataka, who called him and asked why that college does not admit upper caste students at all? As Ambrose told the CM “When we were admitting only upper castes, without observing reservation principle no Chief Minister asked us why were doing that? Now we have decided to admit SC/ST/OBC students more than the reservation quota principle, why are you questioning now?” He continued that policy till he was in that college.

Because of his committed transformative agenda in the Christian educational institutions hundreds of slum, village SC/ST/OBC students entered into high end jobs all over the country.

He trained those students to speak good English and earn high quality degree which would make them stand on their own legs all through life. He was doing the same at the St. Aloysius college that he was heading while he passed away.

Ambrose Pinto, a Jesuit by training, a dalit liberator by belief was uncompromising on Dalit human rights. Though a life time Jesuit he never looked at human problems within the framework of religion. He was secular to the core. Anyone who reads his writing in news papers ( he was a regular contributor to Deccan Herald and other papers) and journals like Economic and Political weakly, Mainstream, and so on he comes out as convinced Marxist, without proclaiming so.

But at the same time his commitment to the Ambedkar’s ideology and liberation of Dalits and Adivasis by using democratic instruments and Indian constitutionalism is unshaken. He was an excellent negotiator between Marxism and Ambedkarism with a Christian conviction of liberation theology at the core of his understanding. He would not refer to Bible as much as he refers to Marx and Ambedkar in his discussions and writings.

Ambrose has given a new definition to the concept "Jesuit", a person who lives as whole time God man, only occasionally in the Jesuit garbs but most of the time in T-shirt and simple pant to work for the liberation of Dalits and Adivasis.

When he was in Delhi, Ambrose expanded the public space so much that the ISI, Delhi became a place for new wave democratic movements, even at a time when the Bharatiya Janatha Party was in power. It became a place of everyday activity for progressives, nationalists and humanists. Though it was a short period of three years within those three years he became a noted person in all the progressive circles of Delhi.

Any new book in the market, that has a liberative message would find a platform for release, wherever Ambrose worked. Any protest meeting against injustice found Ambrose walking with a placard in his hand in the front row.

With Ambrose leaving us, of course a  same smile India looks poor, as a friend of Ambrose said in an e-mail message. In the absence of Ambrose also we must continue our work, which is as much his work.