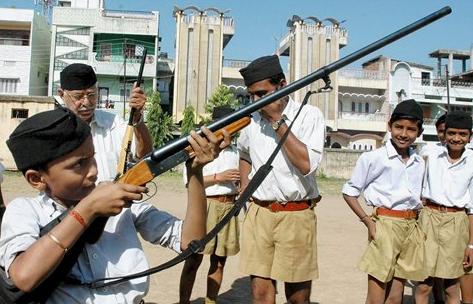 At a recent talk show by an international television channel, the former spokesperson of the Rashtriya Swayamsevak Sangh (RSS) and present general secretary of the Bharatiya Janata Party (BJP), Ram Madhav, firmly asserted that the ideology of the RSS was neither supremacist, nor dominant or aggressive. Leave alone fascist.[1]

Quoted on the show were two foundational documents of the RSS, authored by MS Golwalkar, reverentially referred to as ‘Guru Golwalkar’. He is an inspirational figure for both, India’s prime minister and Ram Madhav, the general secretary of the BJP. Golwalkar was the second sarsanghchalak(leader paramount) of the outfit who expanded the organization after he was given charge by its founder, KB Hegdewar. The two documents authored by Golwalkar referred to on the Al Jazeera Head to Head show, telecast on December 25, 2015 are Bunch of Thoughts (1960 edition) and  We Or Our Nationhood Defined (1939).

A rational way to test Madhav’s claims is by looking at the literature spawned by this million-member organization. Another is to test ideas and thoughts with utterances and actions; which is to evaluate the remarks being made by RSS-BJP heads in and out of this government since it rode to power in May 2014.  Those in government are sworn to the Indian Constitutional mandate of a Republic based on the non-negotiable principles of equal citizenship and non-discrimination. As critically, Indian nationhood is composite and not based on any faith or religion. Are these non-negotiable principles what govern the party that rules India with a majority today?

The first part of this series will test the claims of Ram Madhav with the literature, officially claimed by the RSS.

The official website of the RSS has a version of the e-book, Bunch of Thoughts.
The second text, We Or Our Nationhood Defined M. S. Golwalkar (first edition in 1939) has been orally disowned by some in the RSS-BJP, even if copies are freely available on the internet.  It is not anymore available on the official RSS website.  We at Communalism Combat have an, exclusive zerox copy of an earlier, 1947 edition. This is now available at  https://sabrangindia.in/reports/we-or-our-nationhood-defined-1947-edition [2]

For the purposes of this article, I shall look only at Bunch of Thoughts, not yet disowned by the RSS in which, at the outset it rejects the Indian Constitutional understanding of Indian nationhood articulated in the the Indian Constitution.[3] From start to finish this foundational and guiding document that governs the worldview of the ruling party in India today is at loggerheads with the basic doctrine of the Indian Constitution, equality in citizenship and composite, territorial nationhood.

RSS and the Guru, Both are Anti-Indian Constitution

The RSS and by ideological and organisational association, the Bharatiya Janata Party (BJP) that
rules India today are fundamentally against the concept of Indian nation-hood, Indian citizenship as defined by the Constitution of India. At Page 119 of the Bunch of Thoughts, the RSS’ foundational doctrine, the author has completely debunked the ‘absurdity of the concept of territorial nationalism’.  Golwalkar says, “They (we presume by this the RSS means the Leaders in the Constituent Assembly) forgot that here was already a full-fledged ancient nation of the Hindus and the various communities which were living in the country were here either as guests, the Jews and Paris, or as invaders, the Muslim and Christians. They never faced the question how all such heterogeneous groups could be called as children of the soil merely because, by an accident, they happened to reside in a common territory under the rule of a common enemy. ”

RSS Unashamed about its Aim: Overturn the Constitutional Mandate

“….We have been sufficiently fooled uptil now by their exhortation that we Hindus, who are having a great philosophy of human brotherhood, catholicity of spirit and so on, should not narrow ourselves by the talk of Hindu Nationalism and all such 'communal', 'medieval' and 'reactionary' ideas! We must be able to see through the game and revert to the truth of our nationalism as an ancient fact and the Hindus being the national society of Bharat, so clearly restated by our revered founder when he decided the word 'Rashtriya' for our organisation. We must once again stand up in our true and full stature and boldly assert that we shall elevate the Hindu National Life in Bharat to the peak of glory and honour which has been its birthright since hoary time. (Page 127, Bunch of Thoughts, MS Golwalkar).