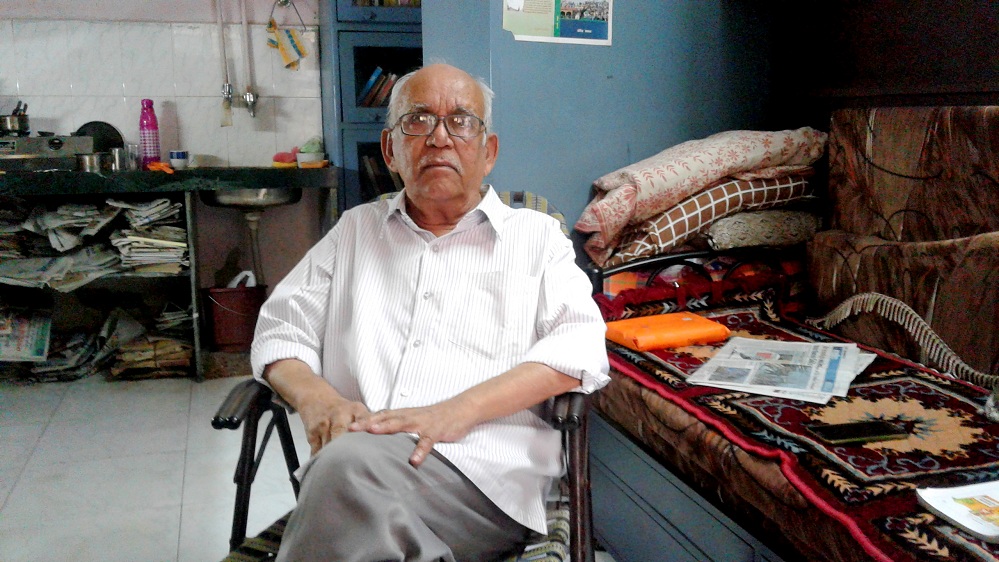 Twenty-five years after the Bombay riots, few people can look back with satisfaction, Firoz Ashraf is one of them. The change from a “mixed” cosmopolitan locality in Malad to a Muslim ghetto couldn’t have been more starkly felt in his flat in suburban Jogeshwari in Abba apartments. Yet journalist and writer Firoz Ashraf has emerged the winner. “Mera fayda hua,” (I benefitted) grins the 77-year-old, sitting in his office crammed with files, steel cupboards and pictures. “I got a chance to understand the plight of Muslims,” he says. When he moved here in 1994 after the Bombay riots of 1992-93, he saw first-hand how poor and backward his community was, and he realised how little he knew about them. He was so moved, he began teaching children in 1997, after he found that a majority couldn’t afford to go to school.

It all began when his watchman’s daughter had failed and he told Ashraf – “You are so literate and have so many books, please teach her she has failed.” It was an accident, says Ashraf that he embarked on his teaching career. Now that watchman’s daughter has opened a coaching class. Before teaching, he had worked in Indian Oil, leading the trade union there and was a columnist for Dharmayug and also for Navbharat Times where he wrote on Pakistan. He writes a column for the Hindi Hamara Mahanagar and is quite proud that the Maharashtra State Urdu Sahitya Academy honoured him with an award recently. He was a writer for the Surabhi TV serial for ten years.

Known as “uncle”, when I met him he was helping out a young girl who was going for an interview as a receptionist. She was waiting for her B.Com results, didn’t know English and he had been giving her some quick lessons. Her father is a daily wage earner and he wanted his children to be educated. Ashraf has taught over 5,000 children since 1997 and some of them have got good jobs, some have even studied till Masters, and some are abroad in the US and Africa. Ashraf doesn’t accept money; he relies on donations and the goodwill of friends. Sometimes, he even coughs up the bus fare for his students; they can’t even afford that and have little money to eat. He often gives them food and money for travel.

His only regret is that he came so late in the day to take on the ills of his community. A product of Nehruvian socialism, he had a romantic idea of India and that dream was wrecked when he saw reality up close. He feels the post-Independence generations didn’t take to politics and allowed the riff-raff to take centre-stage. The intellectuals, the Left and the middle-class only fended for themselves. After the riots, he says Muslims want to move ahead, even the poorest want their children to be educated. Post riots, more and more ghettos were formed in Mumbai. It has become difficult for a Hindu and a Muslim to live together. There are many groups of Muslims as they were never a homogenous community and they tend to flock together.

The biggest change that has come about is that women’s education has received a major impetus, he says. He teaches his students English and poor parents say they will do anything to send their children to English schools. He tries to discourage them saying it’s expensive, but they persist. His students become teachers and train others in English. He even pays them a small honorarium. He laughs again when I ask him where he gets all the money. “Money comes, my one point programme is to educate as many children as I can and send them into what is called the mainstream. I live in an area where most people earn daily wages or have small businesses. Hunger is a big issue here — often the children don’t even have breakfast or don’t get to eat all day,” says Ashraf.

The desire to educate boys at any cost prevails and somehow they get to go to school. It is the girls who are sent to Ashraf because he doesn’t charge them. Ironically he says, most people dread ghettos but here no one talks of religion. Not very religious himself, he has never felt out of place here. While the shadow of riots hangs in the background, it is the prevailing atmosphere, an almost Orwellian sense of fear that permeates everywhere after the mob lynchings, the ban on eating beef and the fear of being caught carrying even mutton kebabs. People travel quietly, they don’t carry meat with them for fear of being killed, he says.

The aftermath of the riots and the current regime has resulted in the community becoming introverted, he feels. “Muslims now feel their opinion doesn’t matter and the gau rakshaks have sent a shiver down everyone’s spines—Whenever the Muslim community goes forward, there is violence and they take two steps backward. There is no room for fundamentalism here — we believe in the Sufi Islam.”

It is his Hindu friends who have been most generous in helping with the schools and teaching and he gets help in kind too. He heads a Community Development Trust’s Asha Kendra in Ahmednagar since 30 years and is engaged in helping out poor patients with alternative treatment.

Living in a ghetto, people don’t know the outside world. “Sometimes people ask me why I hadn’t gone for the Haj — I say if I had so much money I would build toilets for my community,” he remarks. “Our biggest mistake is that we distanced ourselves from our own community as liberal Muslims. Now I realise that even if I am liberal, I can live here. I had never seen so much poverty — I even give my rations to some families. The worst thing is joblessness — I call it the poverty of assistance. There is no spirit among these poor people to fight poverty and come out of it, they need help,” he says.

The only weapon he can give them is education. “I am a good Muslim, I follow the Prophet’s teachings I have compassion, no greed and I have integrity — that’s my religion,” he avers.

Remembering the Bombay Riots Part I by Meena Menon

The Fallout of the Planned Demolition of Babri Masjid: Analysing the Violence in 1992-93 by Ram Puniyani