People’s Alliance for Democracy and Secularism (P.A.D.S) Condemns Incarceration of Akhil Gogoi and Chandrasekhar Under NSA 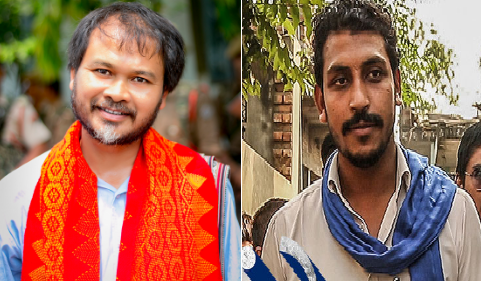 Akhil Gogoi, the leader of Krishak Mukti Sangram Samiti of Assam, and Chandrasekhar of Bhim Army in Western Uttar Pradesh have been under detention for many months now. Akhil was arrested on 13 September 2017 under sedition charges by the BJP government of the state. On 25 September 2017, a total of 122 cases against him were clubbed together under the National Security Act, foreclosing any possibility of judicial redress. The NSA advisory panel of the state approved his detention on 19 November, thereby sealing his incarceration for 12 months at least. Akhil Gogoi has been a vocal critic of the BJP government and was arrested for his address at a meeting against amendments to the Citizenship (Amendment) Bill 2016 which aims to legalise preferential treatment of citizenship applicantson the basis of religion, and which many people in Assam believe is specifically designed to help Bengali speaking Hindus of the state to legally obtain citizenship, while denying it to Muslims. Earlier, he had opposed renaming of 21 colleges of the state after RSS ideologue Deen Dayal Upadhyaay. He was arrested last year also for opposing the eviction of small farmers from areas around Kaziranga National Park. For more than a decade KMSS has been fighting for the rights of small farmers of the state and has led popular mobilisations against big dams, displacement and evictions.

Chandrasekhar of Bhim Sena was arrested in 8 June 2017 on charges of inciting violence and damage to public property during a Dalit public meeting in Saharanpur city. The meeting was called in protest against burning of Dalit houses of Shabbirpur village by a mob of caste Hindus. On November 2 the Allahabad High Court granted him bail, calling charges against him "politically motivated". Instead of letting judicial process run its course the UP government of Yogi Adityanath slapped him with the NSA the very next day. Clearly, the UP government is determined to keep him incarcerated, rather than allowing him a fair trial.

The National Security Act was enacted in 1980. It allows preventive detention of any person by state administration whom it believes to be a threat to national security, public order and maintenance of supplies and services essential to the community. Unlike other criminal laws which come into operation after a crime has been committed, this law permits local authorities to detain a person if they are "subjectively satisfied" that a person will be a threat to conditions mentioned under its provisions, i.e. before any crime is committed. The detained person can be put behind bars without any charges and trial for up to one year. Her/his incarceration can be extended. Clearly, the NSA runs counter to the fundamental rights of citizens. Its existence on statute books gives permanent emergency power to the ruling establishment. Like AFSPA, TADA, and the Unlawful Activities Act, the potential for its blatant misuse is built into its very architecture. Application of this law in the past thirty seven years bears this out. It has been used against trade unions leading strikes, student activists sitting on dharna, human rights activists, community organisers, or anyone proving to be a thorn in the side of the administration. In June this year the UP police chief gave directions to use this law for enforcing cow slaughter ban in the state.

State governments led by all political parties have used NSA for ulterior motives. Its misuse by the BJP governments of UP and Assam has taken this practice to a new low. It is also essential to understand the special context of the arrests of Akhil Gogoi and Chandrasekhar from the point of view of the long term political and social designs of the Hindutva. Both these leaders have emerged from the ground, and are popular among definite sections of their society. Chandrasekhar is a symbol of the self assertion of the current generation of Dalit youth in Western UP, who have decided to be not subservient in any way to caste Hindus, even if they have to bear economic costs, suffer violent reprisals, or face the brunt of the state administration. The social mobilisations of Bhim Army are a direct challenge to the RSS plans of projecting Hinduism as a great religion and uniting Hindus under a hatred driven, anti-minority programme. Akhil Gogoi started as an anti-corruption crusader, and has gained respect and following among the poor and marginalized of Assam by consistently raising their concerns. The KMSS under his leadership has emerged as one of the largest mass organization in the state. It has successfully organized many protests and agitations. Akhil Gogoi has also challenged the Hinduisation plans of the RSS for Assam by emphasising the ethnically diverse and unique character of Assamese society. He and Chandrasekhar may not pose an immediate political challenge to the BJP, however their political visions project democratic and progressive alternatives to Hindutva. That is why Hindutva can not succeed without crushing them and demoralizing their popular base. Their arrests are a consequence of the long term challenge they pose to Hindutva.

People’s Alliance for Democracy and Secularism demands that Akhil Gogoi and Chandrasekhar be released immediately. Laws like the NSA which give unlimited power to state authorities to detain anyone without trial should be repealed. Police officials and political leaders who conspired to detain them under NSA should be given sufficient punishment to act as a deterrent.