Nobel Laureate Naguib Mahfouz on the freedom of ideas, subversive art and censorship

One of the central figures of Arab Literature, Nobel-laureate Naguib Mahfouz (December 11, 1911 – August 30, 2006) was a swimmer against the current and we get a glimpse of that in the following excerpt titled ‘Imported Ideas’ from the recently published The Meaning of Civilisation, collection of essays on one of Egypt’s most important decades, marking Egypt’s break with the Soviet Union to the Yom Kippur War with Israel and eventual peace accord up to Sadat’s assassination by Islamic extremists in 1981, published by Speaking Tiger Books. In this excerpt from the book, he writes that the ‘import’ and ‘export’, or the exchange of ideas is one of the hallmarks of development and democracy, further emphasising that art is essentially subversive and that societies must develop an ethical stance towards art by monitoring and critiquing with empathy and appreciation, instead of censoring it. 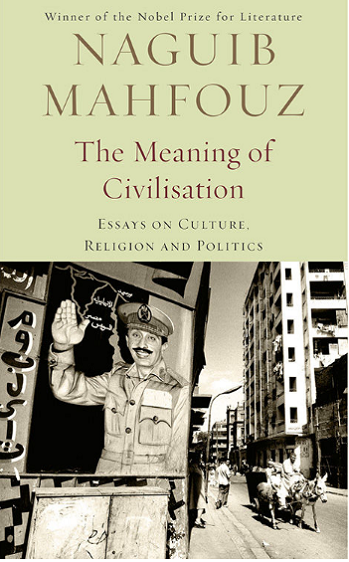 The term ‘imported ideas’ is on the verge of becoming a curse on thinking, due to long years of criticism and carping. The issue is not about the import or export of ideas but it is, first and foremost, about what humanity needs to support its development towards a form of progress in which there is no difference between ideas and ideologies on the one hand, and investment and consumer goods on the other. From the historical point of view, the import of ideas is a policy that has been followed since time immemorial and is carried out both spontaneously by means of individuals involved in trade and travel, and by the design of enlightened rulers. Thus, civilisation was transported from the ancient East to Greece and thence to Rome, and when the Islamic state established its structure, as well as its developed religious base, it looked to imported concepts. Perhaps this practice of importing first took place during the era of the prophet, and the outstanding example of this can be discerned in the originally-Persian concept of trench digging.

We are importers. In olden times we imported Christianity from Palestine and Islam from the Arabian Peninsula. In modern times, we have imported science, democracy and socialism from Europe. There have always been reactionaries and Luddites who have warned against imported thought, people who tried to close the windows on the world. This does not mean that we should sanctify everything imported, or lose the necessary pragmatism to digest or develop what comes from abroad in order to adapt it to our reality. We also do not need to import frivolous items or concepts, but that is one thing and closing our windows to the world is another thing completely.

It is indeed the grossest mistake to imagine that our cultural authenticity can only be reliant upon our own history or to see anything foreign as a challenge. Cultural authenticity is not the necessary or inevitable result of our heritage and all forms of innovation stem basically from that very freedom of thought in which, by dint of observation and discernment, the old and the new, the domestic and the foreign, find their own level and which accepts or rejects various aspects according to their usefulness following a process during which they are examined and tried out in practical situations. The crucial point for me in determining what constitutes good or progress, is that it should enhance our lives at this point in time, fill a need and help create the requisite justice, freedom and atmosphere of cultural creativity.

Between Fear and Intrusion

This fear of imported ideas is odd at a time when the world’s nations are closer together than at any time previously. In our time, the whole world has been discovered, and there are good political, economic and cultural relations between its farthest-flung reaches. Movement from one side of the world to the other has become easier and quicker than journeying from one country to the next in the ancient world. Anything that occurs in one place has reverberations everywhere else, and the discovery of minerals in the ground, or a coup d’état somewhere, is followed by shockwaves in the greatest and most powerful centres of civilisation. As we stride towards world unity, we must contribute the requisite amount of talent to this symphony in order to play together in tune and prevent the musical output from slipping into disharmony or cacophony, for life will continue to be an untrammelled and continuous process which knows no stopping or recoiling no matter what mistakes or relapses it has been subjected to, whatever myriad crises have attempted to mute it. That is why the dream of a paradise lost in the mists of time seems to be a puerile stance, with all its paramount fear about today and tomorrow symbolising a lack of self-confidence and an attempt to flee from responsibility and ideas with the result that everything becomes worthless. The role of our heritage in this battleground is none other than to provide a shining exemplar of an unrepeatable and unique success, and to be a value with which to nurture people so that they can seek out ever new fields which accord with the eternal flow of life in which reactionary forces also have a role and which can also be a lesson for us. These reactionary forces may well be fighting a losing battle, but their obstinacy makes us think again and teaches us to avoid recklessness. Even though these reactionary forces are generally on the losing side, they perform an unintended purpose. It can thus be said that those pushing the wheel forwards, as well as those trying to hold it back, participate in progress.

That leads us anew to the topic of censorship and art. Censorship has long been onerous, as the poet Sharif Razi said:

You are the happiness of my heart and its torture
My heart lives for your command and your sweetness.
I have messages of love I do not remember
But for the censor, I would have conveyed them to your mouth.

Except that enlightened censorship means monitoring art and not censoring it. Its starting point must be one of love and appreciation; it should be always ready to come to an understanding with art without arbitrariness or intransigence and bring to it a gentle awareness of the unintended hyperbole or aberrations which only appeal to the spirit of commercialism or cheap success. In its essence, proper censorship should be more akin to criticism and only prevent art from giving its message when created by those unfit for purpose. However, there is another type of censorship which generally stems from undervaluing art, artists and progress, whose starting point is wariness, contempt and hatred and whose only aim is to make art subservient to its ‘parents’ – the state and society which bestow it with a conservative content, nay a highly conservative content, waving scissors about in one hand and a stick in the other, wrapped up in their regulations and narrow mindedness, as if the cure is to be found in the debasement and shackling of the human spirit, and which exert themselves to instil inflexibility and offer death. Art is a rebellious youth spurred into action by contradictions and by the hissing sound of negativity, who then rolls up his sleeves and sets to work against all the criticism and intrusiveness of the state by elegising all manner of things and announcing the new and the strange, by complying with the dynamic and innovative stream of life which flows with full force towards an unknown tomorrow.

Censorship lashes this rebellious youth to the status quo, directs his attention to the past, and, while he dreams of latent revolutions, it bids him to sanctify worn-out traditions and moribund customs just as he is about to smash the idols and set fire to outmoded means of expression. Just as one cannot avoid seeing the ridiculous, there is an inevitability about this clash. For that reason, there can be no peace or agreement between the censor and the rebellious youth until one has vanquished the other, and so we end up with either strong censorship and no art, or art without censorship. I worked as the general director of censorship at the Bureau of Arts in 1959, and I used to tell my colleagues ‘Creativity in the written word lies in open-mindedness and any slight against it should be considered, like divorce, to be the most hateful thing in the eyes of God.’

This leads us on to draw a comparison between what takes place in society and what can be seen on the large and small screen. It is well known that the cinema in some Western countries has an astonishing freedom to depict sex that we might consider here ugly and disgusting, but it is paralleled by a similar sexual freedom in society to the extent that sexual deviation is protected and guaranteed by law. As for our society, we still sanctify traditional ethics and spiritual values. In spite of that, we have factories producing wine and we allow advertisements encouraging people to drink. We open casinos in our tourist resorts and our parks witness unusual sights which we tolerate. We speak of what takes place on al-Haram Street with no embarrassment.3 Our summer resorts have become places of exhibition for half-naked bodies, and we see nothing the matter with that for perhaps we see them as landmarks of beauty and civilisation. Some people may consider this outrageous and some may see it as a sign of development, for to each his own outlook on life. In any case, if a nation condemns what is taking place as decadence and sets about trying to change it, they will have to declare holy war on society in bars, casinos, brothels and other places of easy morals. However, we do not expect them to declare war on the cinema and the television as if they offer a reality which society reflects, as society is the reality and the screen is merely its reflection. It is impossible for immorality to appear on the screen without it being a reflection of a social reality. It does not appear on the screen for the purpose of titillation but the artist depicts it because merely showing it on screen shows up its ugliness and the role it plays in the destruction of the human spirit. It is as if it is not enough for us just to ignore what is taking place in our society, but we also insist on shackling those who use artistic means to highlight immorality. Furthermore, there is no point in laying siege to art in order to artificially clean up what appears on the screen. Should we not instead direct our weapons towards the real evil which is besetting society?

This extract from The Meaning of Civilisation has been re-published with permission from the publisher.