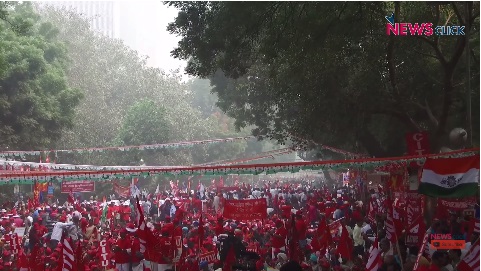 As over 70,000 workers from across the country gathered at Parliament Street facing down police and paramilitary barricades, the historic 3-day mahapadav (mass sit-in) got off to a rousing start in New Delhi today. Under the banners of ten central trade unions and several federations of workers and employees, which represent the bulk of India’s vast non-agricultural workforce, they are demanding immediate attention to wage increase, price control, end to labour contracting system, strengthening of public distribution system, curbing job losses, and a stop to govt. policies of privatization, inviting of foreign capital, destroying protective labour laws and welfare cuts.

This mahapadav is not just another of those ‘routine’ protests by workers, that are as routinely ignored by the govt., the mass media and the urban middle class. What sets it apart and makes it historic and important?

It is expected that the coming two days will see an increased participation from workers already on their way to Delhi. The mahapadav is indeed turning into one of the biggest expressions of workers’ solidarity and striking strength in recent times. The Modi govt. would do well to heed the voice of the people – otherwise he and his govt. face a rough ride in the remaining days of their misrule.