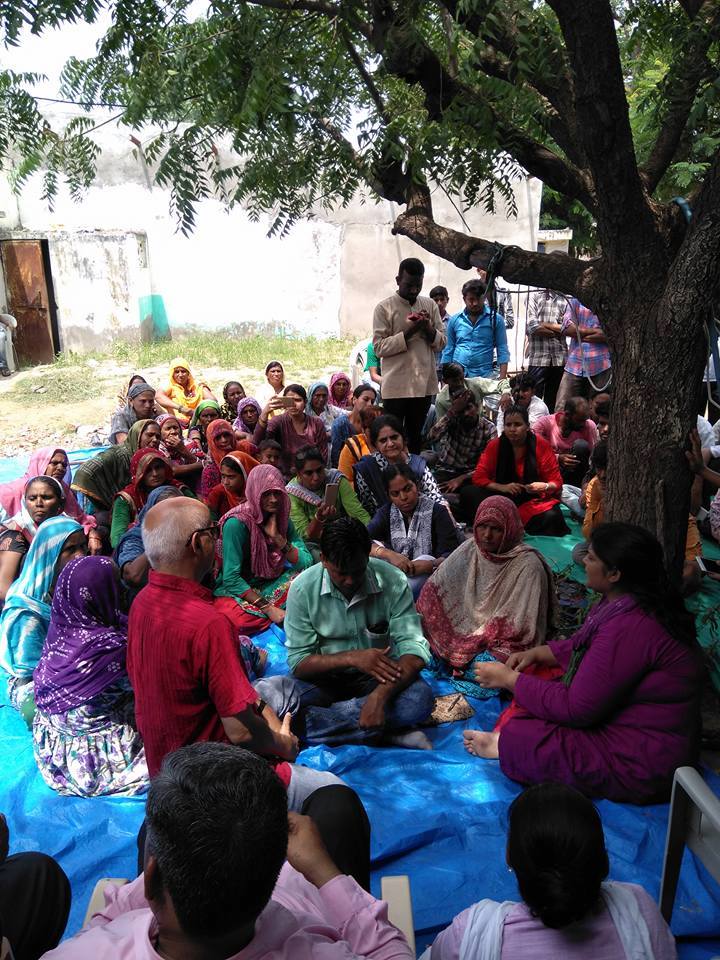 On the third day in Gujarat, we drove to the site of a communal conflagration earlier this year that has barely registered in the national consciousness, but which led to one death, several injuries and the burning of 140 houses. We drove to the village Vadavali in district Patan, and sat with Naseem Ben, the widow of the Ibrahim who had been killed in the violence.

The official story was that the ‘riot’ arose from an altercation between students of different faiths. A Rajput boy was seated next to a Muslim student as they wrote their Class 10 Board examination. The instructor found that the Rajput boy was cheating, and turned him out of the examination hall. The boy was convinced that his Muslim neighbour in the exam hall had complained about his cheating to the instructor. When he came out of the hall, the Rajput boy fell upon him. An elderly Muslim man tried to mediate between them, but the furious Rajput student beat him up as well.

The Rajput boy then went to his village, which neighboured Vadavali, and returned with 15 older Rajputs who heatedly argued with the Muslim boy. Elders intervened and said that hot-blooded youths should not be encouraged to escalate a small matter. The Rajput men left.

A couple of hours later, a crowd of around 2000 Rajput men from surrounding villages arrived on tractors, cars and motorcycles, armed menacingly with daggers, rods and a few rifles. They also carried with them petrol and a white chemical to burn down cement walls and roofs. They went on a rampage, vandalising and burning each of their homes in the Muslim neighbourhood, and thrashing the men. Terrified women and children ran out and hid in the fields, the men often within their homes or on roof terraces.

Naseem Ben spoke of how her family were sitting outside their home when the enraged mob of Rajputs appeared suddenly. Her husband Ibrahim, a day labourer, panicked when he heard the roars of the rampaging mob, and sent out the terrified women and children from the back door. His sons ran outside and hid on rooftops. Ibrahim locked himself inside his house. The crowd came to his home, shouting out his name. They broke down the door, found him cowering in a corner. They dragged him outside and lynched him until he died. Through all of this, the villagers claim, the police stood by and only watched.

This official version of the events – that it was a spontaneous clash between the two communities sparked by the squabble between the students from the two communities – does not explain how within two or three hours of the scuffle, such a large mob of Rajputs from several villages could gather, and how they could have collected such large quantities of petrol and incendiary chemicals, as well as their array of weapons. This strongly suggests an earlier conspiracy, in which the fight between the students was not a flashpoint but an excuse for the assault on the Muslims of the village.

The Muslim villagers agree: they believe that the reason for the assault was quite different from the official claim. The panchayat elections were under way. The Muslims and Patels of the village had sizeable populations, but neither commanded enough votes to elect ‘their’ Sarpanch, a person from their caste. The leaders of the two communities reached an unprecedented agreement to join hands, and agree to have a Muslim Sarpanch for half the term, and a Patel Sarpanch for the other half. The Muslim Sarpanch was elected unopposed, because the village knew they had the numbers. The Rajputs were reportedly furious, as their village had never elected a Muslim Sarpanch. According to this version, the Rajputs resolved to teach the Muslims a lesson that they would not forget. For this reason they shot the Muslim woman Sarpanch’s husband (the bullet entered his groin, but he survived); and to kill Ibrahim who was one of his main supporters.

The police surprisingly seemed to support the latter theory, by registering a case under Section 120A of the Indian Penal Code against the Rajput mob. This section deals with the crime of criminal conspiracy. But as we have seen in virtually every case of hate crimes that we looked at during this Karwan, the police also registered criminal charges against the victims, charging them of causing grievous hurt with dangerous weapons. They charged all the leaders of the Muslim community including the Sarpanch’s husband of this fictitious crime.

Also in common with most of the cases, no one from the administration ever visited the family who lost their loved one in the communal assault, or offered any assistance. And no one from among their non-Muslim neighbours came to their aid.

We drove a few hours from there to a village Kashor in Anand district. Here we met Shailesh Manibhai, of the Dalit Rohit community and his mother Maniben. The caste occupation of the Rohit community is the skinning of dead cattle. Although he has studied up to Class 10, Shailesh still could find only this socially demeaning work. His father had been bedridden for 15 years. His untouchable ‘unclean’ caste occupation thrust on him stigma, but helped bring food to his family. He worked in partnership with a couple of Rohit brothers in a neighbouring village who owned a tractor. Whenever a cow or buffalo died in any household in the village, they sent word to Shailesh. He would call his partner, and they would lift the carcass in the tractor and transport it to a lowland of the village designated for disposing dead animals. 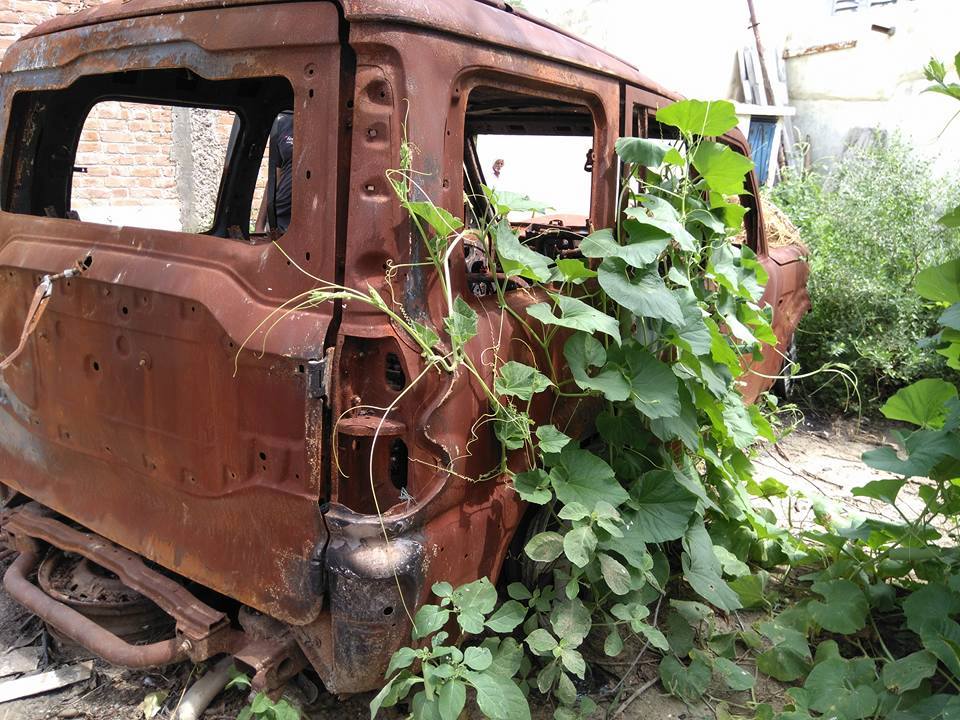 On 11 August 2017, a Rajput of his village sent word that his cow had died, and Shailesh arrived with his tractor and hauled the dead animal on to the tractor. Heavy rains in the village had turned the designated lowland for skinning into a swamp, so Shailesh drove his tractor to another waste patch of land adjacent to the funeral ground of the village. This angered the upper-caste residents of the village, and they went there with the Sarpanch to rebuke Shailesh for polluting the site with the dead cow. Shailesh agreed to continue to use the swampy lowland to skin animals in future.

There the matter should have ended. But the next morning, a group of around 150 enraged Rajput men stormed into the Rohit enclave, and began thrashing Shailesh for his comeuppance. His mother tried to intervene and they beat her as well. All the while they cursed them with caste-laden insults. His mother spent a few days in hospital.

An earlier generation would have accepted the beating and insults passively as part of their caste burden.  But not Shailesh. He went to the police station, and filed a detailed complaint naming the upper-caste men who had attacked him. The police registered a case under the SC ST Atrocities Act against the upper-caset men of the village listed in Shailesh’s complaint. He also announced that he would refuse to lift or skin animal carcasses in future.

The upper-case people of the village are irate, incensed that a low-caste boy could challenge them in this way. The charge of committing atrocities against a Scheduled Caste family is a grave one, which if proved could result in long jail terms.  And they now have to lift the polluting dead cows and buffaloes themselves, digging a shallow grave for them.

The upper-caste people of the village have unanimously decreed a complete boycott of the Rohit caste. Since they are the land-owners, the community is out of work. For fear of caste-taunts and retaliation, they have shifted their children to schools in more distant villages. A man who worked in a factory for 11 years was suddenly told to resign by his upper-caste managers, because he belonged to the village which had the audacity to file charges of caste atrocities against upper-caste men. ‘Who knows when you may use the same law against us?’ He too has challenged his discharge in labour courts.

We found the spirit of the Dalits in the village high, because they had defended their self-respect before the upper-caste people of their village. ‘Jai Bheem’, they would shout at every step of our journey to the village. I said to them that when they fought for equality, they fought not just for themselves. They fought for all of us.