The eleventh day of the Karwan became one of unexpected confrontation and tension.

The Alwar district administration again tried hard to persuade us to bypass Behror, where Pehlu Khan had been lynched on the highway. They did accept my request that we visit the Behror police station to ask the police a few hard questions about their investigations into the Pehlu Khan lynching. But they were resolute to not permit us to place flowers at the site where he was lynched by a violent mob. The district officers who met me said that violent mobs had gathered with stones to block our passage. I remained determined. I told them that I was convinced that we could not allow a mob to violently block a small mission of love and solace.

I spoke to my members of the Karwan. All the participants were united in their support of my decision to defy the orders of the administration; to place flowers at the place where Pehlu Khan had been lynched. I however said I was unwilling to put any of them into any danger, except the unavoidable possibility of the stoning of our bus. I therefore insisted that they remain at the bus, while I alone would go the place to place the flowers on behalf of the entire Karwan.

There was both tension but cheer and determination among my co-travellers in the Karwan. Before we reached the police station, a small group of villagers in Barod village blocked the path of the Karwan. We found this was a group of people who had gathered at an early hour to greet us with rousing slogans, flower garlands and steaming morning tea. At that fraught moment, their gesture was all the more welcome, They made a few impromptu stirring speeches, including of the Hindu Sarpanch, about the importance of fighting the politics of hate that divides us. 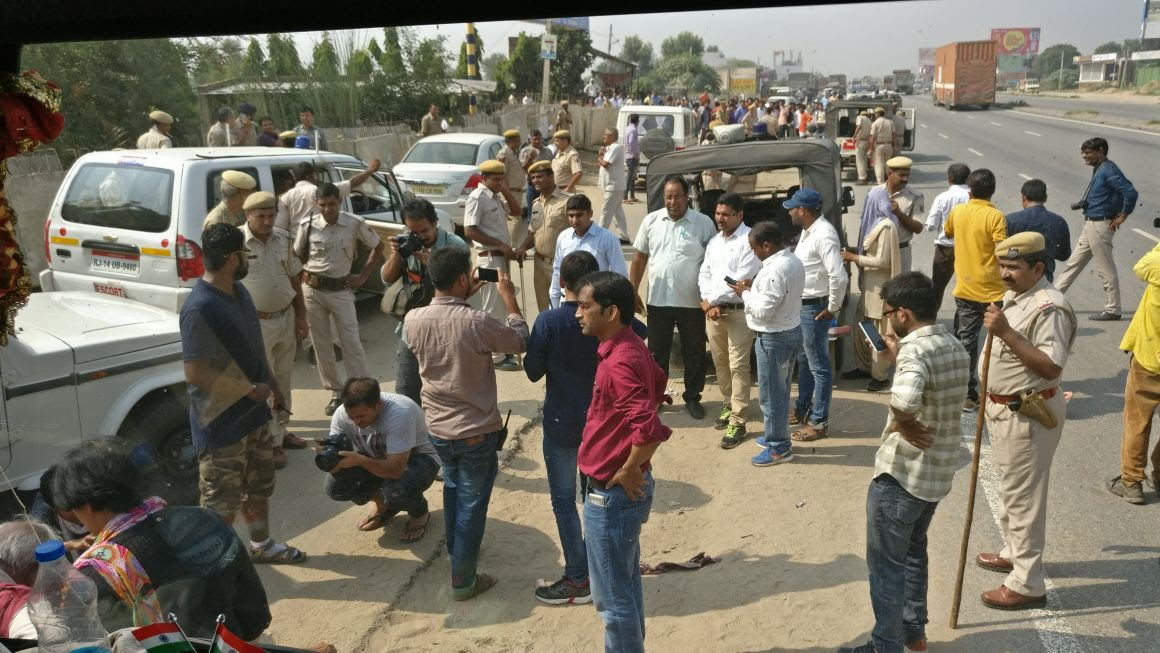 We then drove to the police station. The Additional Superintendent of Police and Additional District Magistrate were present there to answer our questions. The closure by the police of cases against men mentioned in Pehlu Khan’s dying declaration, they said, was a decision by the state CID, and they could not comment on it. But I told them that it was they, the local police who registered criminal cases against the victims of the lynching, dubbing them criminals, immediately after they had been brutalised by a hate mob. I said it is the duty of the police to defend both the victim and truth, but asked why they let them down so badly? They had no answer.

After we emerged from the police station, the administration again tried to dissuade me from the small journey of a few hundred yards to the spot at which I would place the flowers. They said that a furious mob had gathered there with stones and sticks and would cause me harm. I said I was prepared for it, and would not agree to discarding the plans of a floral tribute. I said I would go there alone as I did not want to risk any of my Karwan colleagues being attacked or hit by a stone. I told the policepersons that from my years of experience as a district officer, I knew that it would have been simple to prevent or disperse the small crowd of protestors armed with stones. The senior police officer answered me hotly, saying, ‘they have the constitutional right to protest’. I answered – ‘I am not sure that anyone has a constitutional right to protest with violence. But even if you so believe, then surely I have at least the same constitutional right to protest armed with nothing other than flowers’.

I began to walk to the site, but the police physically blocked me. I then sat on the ground in a spontaneous dharna. They would have to either arrest me, or allow me to walk to the location and make my floral tribute. I sat for about half an hour, as they confabulated. 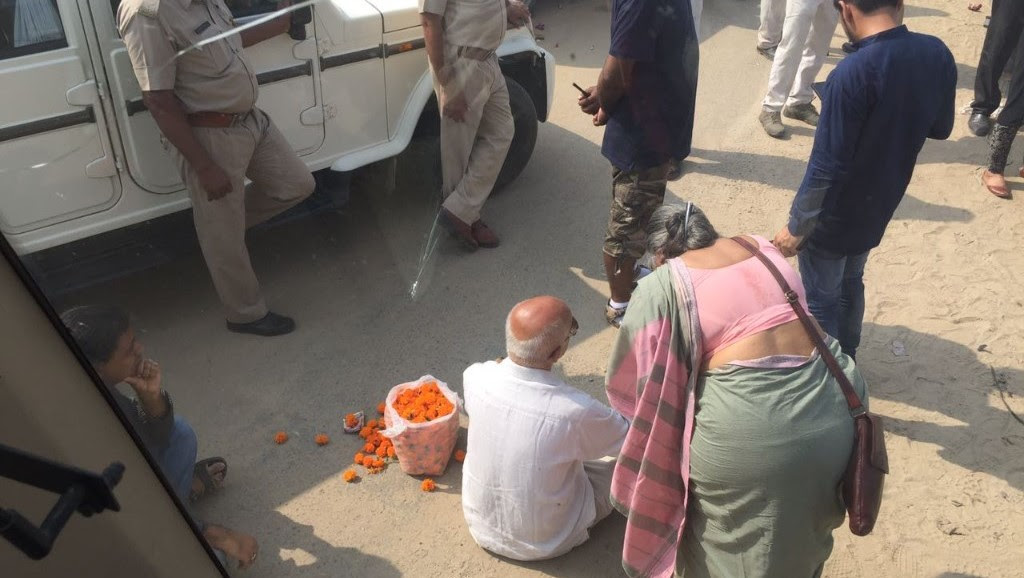 With two fistfuls of marigold flowers, and surrounded by a few police persons, I walked the couple of hundred years to the spot where the ageing cattle trader Pehlu Khan had been cruelly lynched by a mob. It was a dirty non descript stretch of a sidewalk. I knelt down there, and said, ‘I am not a believer, so I cannot pray. But I believe in insaniyat aur insaaf- humanism and justice. Therefore, for humanism and justice, I place these flowers here. In memory not just of Pehlu Khan, but of hundreds of others like him who have fallen to hate violence across our land’. 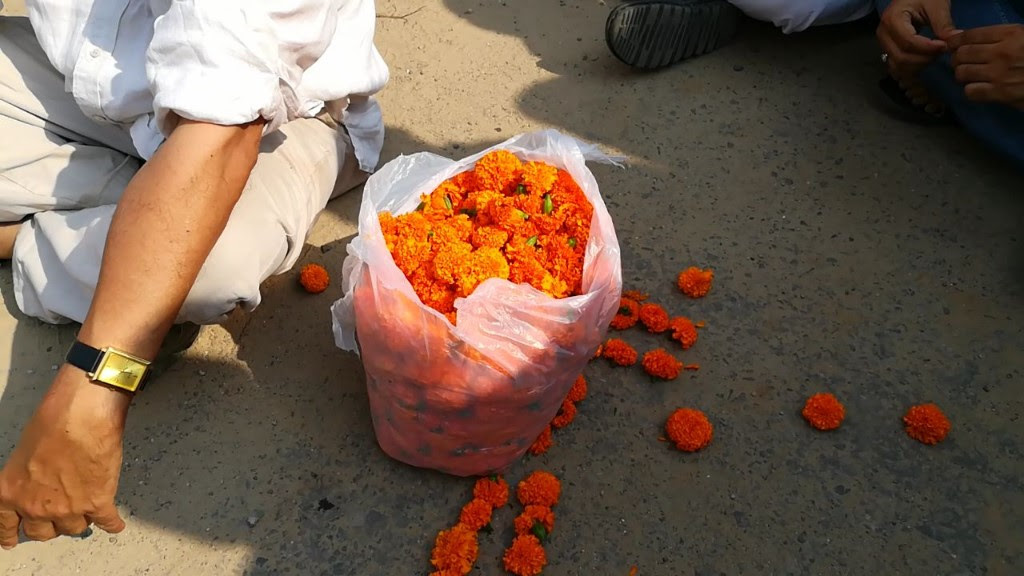 I returned to the bus, and the police bundled us rapidly into the bus. As we drove past, the protesting men threw a few stones at the bus.

On the way, people of the small town Kothputli had planned a small welcome to the Karwan. But in the presence of the police, a bunch of young men arrived, tore down the banners and threw away the flowers, The police said they were helpless to stop them. The police then asked just two organisers to meet the bus outside the police station. I emerged with a couple of colleagues, and the policemen said we had only a couple of minutes. They handed over packets of packed breakfast, and a few men gathered. One of them took off his shoe to throw, as the bus drove away.

The Karwan now had police escort vehicles both ahead and following its bus. It was only with this that the state administration would allow the Karwan to travel through Rajasthan.  A sad day when a caravan of love can travel only with the protection of the police. We don’t need or deserve protection; it is the bereaved families who we have met these days of the Karwan who the police should protect, but it is they who they fail so profoundly.