No Result
View All Result
in Features, Books, Videos

When the Moon Shines by Day 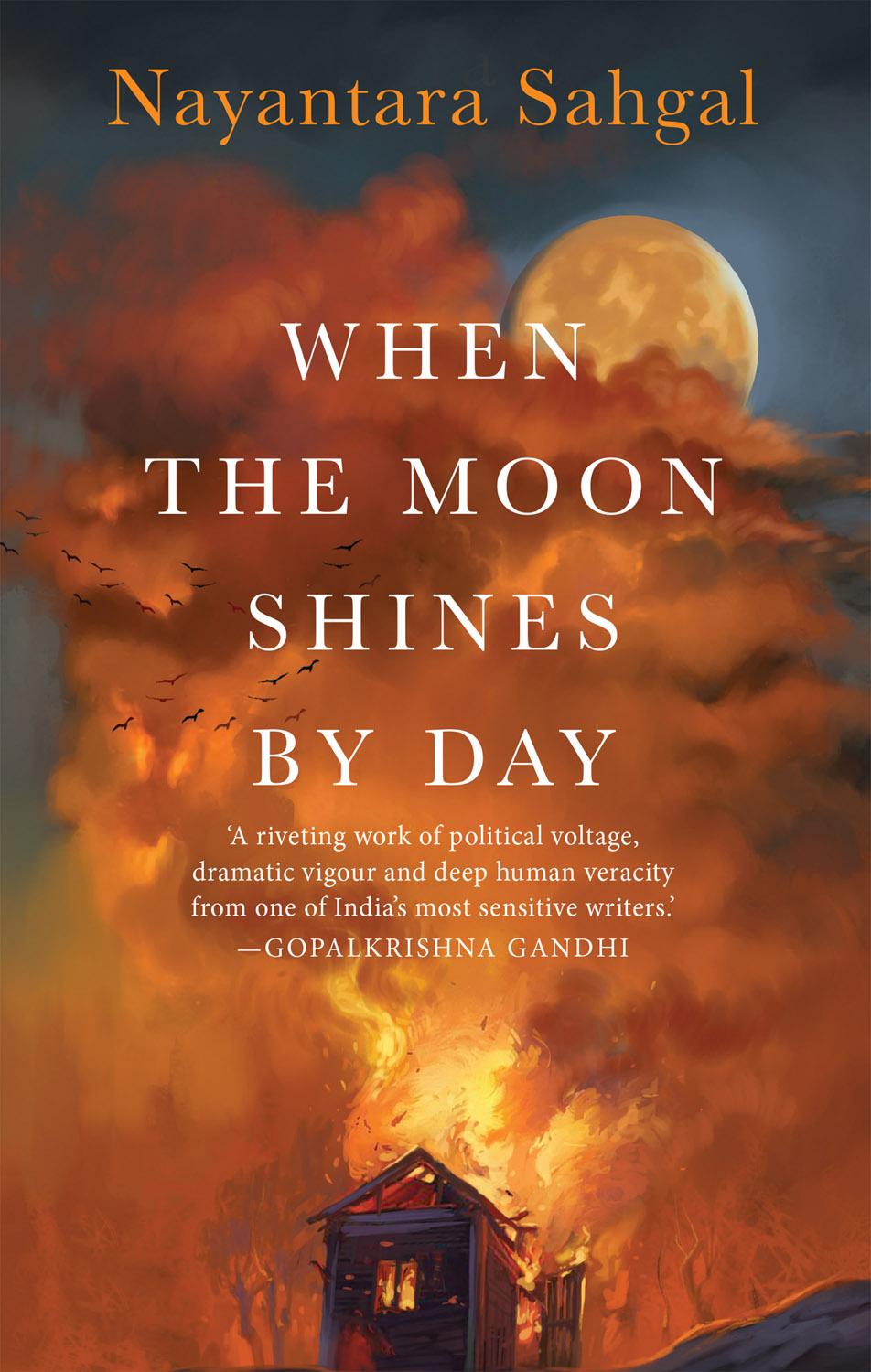 India has changed. Rehana finds her father’s books on medieval history have been ‘disappeared’ from bookstores and libraries. Her young domestic help, Abdul, discovers it is safer to be called Morari Lal in the street, but there is no such pro­tection from vigilante fury for his Dalit friend, Suraj. Kamlesh, a diplomat and writer, comes up against official wrath for his anti-war views. A bomb goes off at Cyrus Batliwala’s gallery on the opening day of an art show.

Presiding over this new world is the Director of Cultural Transformation, whose smiling affability masks a relentless agenda to create a Hindu master race.

In this atmosphere, Rehana and her three book-club friends, Nandini, Aruna and Lily, meet every week to discuss a book one of them has chosen—their oasis of peace amidst the harshness of reality—even as Rehana’s German friend, Franz Rohner, haunted by his country’s Nazi past, warns her of what is to come. All revolutions, he wryly observes, follow the same path. But is India about to prove him wrong?

In this brilliant, dystopian satire, Nayantara Sahgal draws a telling portrait of our times.

Read an extract from the book below:

Everything in her ground to a halt yet her brain worked, informing her this was no clumsy haphazard killing. Four had surrounded him. What of the other four? They had watched, memorizing which blows where and how many. The mathematics of it had been tried, practiced and perfected somewhere else, and somewhere else before that. The act of killing had been fined down to a repeatable reliable recipe. It did what a single bullet or a spray of bullets could not do. Alive one minute, dead the next, was not the purpose. It was the interval in between that punished.

Rehana found herself on her knees beside the body, as paralysed as he had been, confronted by deadly danger. She felt the terror of being encircled by weapons poised to strike, the helplessness of skin and spine against the savagery to come. Feeling went no further. In the unbridgeable chasm between herself and the sufferer, between one person and another, her flesh could not feel, nor ever know the agony his flesh had endured. She willed herself upright, straightened her buckling knees and walked back to do what had to be done. Suraj’s body, Suraj’s father, the police. At some hour of what remained of the night she said a requiem for the faith of her fathers. Sanatan dharma had been slaughtered in cold blood this night.

On Monday, 18 September, join Nayantara Sahgal in conversation with Githa Hariharan live from Facebook at 4 p.m. Join in by clicking here.

The extract from the book has been published with permission from Speaking Tiger Books.

Nayantara Sahgal is the author of several works of fiction and non-fiction, the first of which, Prison and Chocolate Cake, an autobiography, was published in 1954. Her works include classic novels such as Rich Like Us, Plans for Departure and Lesser Breeds. She has received the Sahitya Akademi Award, the Sinclair Prize and the Commonwealth Writers’ Prize. She is a Member of the American Academy of Arts & Sciences. She has been awarded the Diploma of Honour from the International Order of Volunteers of Peace (Italy), and an Honorary Doctorate of Letters from the University of Leeds. She returned her Akademi Award in 2015 in protest against the murder by vigilantes of three writers, and the Akademi’s silence at the time. She has been a Vice President of the PUCL (People’s Union for Civil Liberties) and is engaged in an ongoing protest against the assaults on the freedom of expression and democratic rights.

Shudra Consciousness and the Future of the Nation