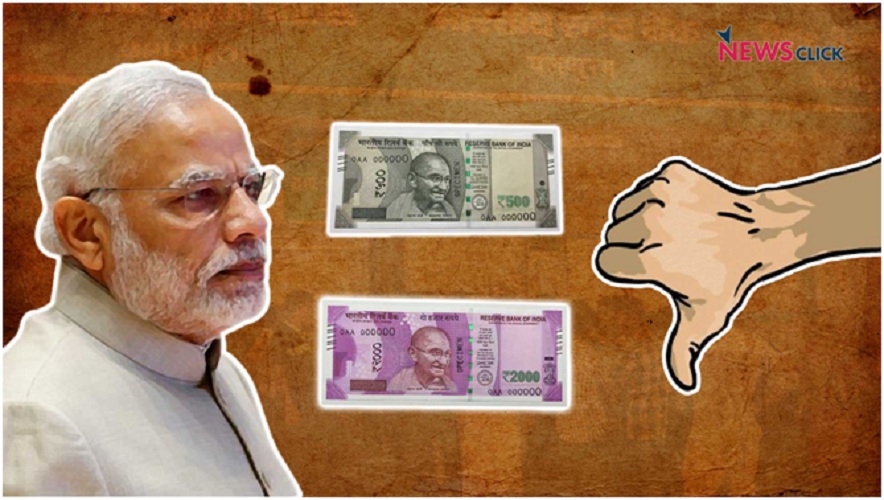 Recall what Modi said to the nation in his first announcement on 8 November 2016: "This step will strengthen the hands of the common man in the fight against corruption, black money and fake currency." Black money, fake money and terrorist money was what he claimed would be destroyed at one stroke. Given the ground reality, none of this was tenable. But he could deceive the gullible masses into believing that he was a brave man, ready to take on the moneyed and the anti-national racketeers. Black money, according to income tax estimates through their raids, was just less than 5% of the total illegitimate wealth. Black money is held in assets, gold, real estate and foreign banks. It is held in currency either by petty bureaucrats or politicians who need it to run their political machine. Contrary to Modi’s beliefs, the big ticket corruption happens in the business world through cross border trade (under/ over invoicing) and tax evasions, perhaps digitally. Another source is politics, Modi’s own profession. So, demonetising 86% currency for such a small change could surely not be the reason. Next, the fake money estimates by the Indian Statistical Institute was to the tune of Rs 400 crores — not even a drop in the ocean of currencies demonetised; hence, this also cannot constitute a logical reason. The terrorists are not terribly dependent on Indian currency. Modi, or rather his entire class, considers Maoists terrorists, but they are not. Nonetheless, they might certainly have been inconvenienced. But to surmise that neutralisation of their stock would end their movement was too naïve to become India’s prime minister. So none of these primary objectives behind demonetisation indicated by Modi was tenable.

While there were no benefits from demonetisation in economic terms, the costs were certain, and they were substantial. The printing costs of the new notes to replace the old ones is estimated to have cost in the range of Rs 12,000 to 16,000 crores. Add to it the costs of logistics; the cost of refurbishing and recalibrating two lakh ATMs spread all over the country; and, of course, the cost of economic activity being stopped by unavailability of cash, and the human cost actually incurred in terms of hunger and death.

As this began getting exposed, Modi resorted to shifting his goalposts. He twisted the entire rationale to that of promoting digitisation, or cashless (later moderated as less-cash) economy. Surprisingly, digital payment companies like Paytm were ready to cash in on this cashless rhetoric. In the absence of cash, some people in urban areas quickly switched to digital payments. This manifest harassment of people was also not spared; it was flaunted as the success of demonetisation. Given the cost of digital transaction (surely Modi knew that his IRCTC, a company under the Railway Ministry, continued to charge 1.8% extra if you used credit card), once the currency is made available, people would revert to their convenient mode of cash transaction. Many people, including me, have given the relative economy with the currency vis-à-vis the digital cash; but when did Modi listen to others’ voices? As the RBI confirms, the level of digital transactions has indeed reached its pre-demonetisation level. Even digitisation of the economy could not help Modi save his demonetisation from being a flop.

In the absence of any cogent answers to the criticism coming from all quarters, and mounting negative evidence, the Modi-Jaitley duo clutched at every straw to justify their intrinsically stupid decision. In December, Jaitley used supposedly increased indirect and direct tax receipts to claim that demonetisation did not hurt the economy. Later, when the income tax returns data became available, Jaitley and Co. attributed them to the success of demonetisation — until people began showing them bigger growth in number of returns without any demonetisation in previous years. Jaitley conveniently forgot that his own Economic Survey had revealed a weak investment climate and sharp decline in industrial credit off take, the lowest in the last 65 years, which has been showing up in the absence of new capital formation and the rise in job losses. But Goebbels’ disciples will not be deterred by these truths! Even the result of the first quarter after demonetisation, showing a dip in the GDP, did not deter them. In his Independence Day speech from the ramparts of the Red Fort, Modi, with characteristic confidence, made questionable claims, inter alia, about demonetisation having brought the generation of black money to a halt.

The first quarter after demonetisation registered a growth of 6.1 % as against 9.1% in 2016. It was much lower than even the 30 economists’ prediction of 6.65% in a Reuters poll. Now, in the next quarter, the first quarter of 2017-18, GDP figures show a further fall to 5.7 % against 7.9% in the same quarter last year, the lowest in three years. There was no surprise. The sane voices warning of such economic damage were drowned in the deliberate cacophony of government voices intended to confuse people. The fact is that demonetisation has completely devastated the cash-based informal sectorthat contributes 45% to the GDP and employs over 80% of the workforce. The sector is precarious in nature and does not have the capacity to bear severe shocks like demonetisation.Contrary to what the government apologists say, it will take a long time to restore normalcy in this sector.

Demonetisation is about the economy — which the common man and woman hardly comprehend or relates to. But they certainly understand the hardship demonetisation has heaped on them for no fault of theirs. Their hardship will never be revealed by these figures being flaunted by the government. The common manwas made helpless; he had to stand in queues at ATMs to get his own hard-earned money. Millions like him had to go without food; some even lost their lives. The common people will never forget the chaos created by the daily flip-flop of the RBI during those cashless days. There were as many as 62 amendments in procedure during the first three weeks. The common man bore all these believing Modi’s statement that it was good for the nation. But the truth is coming out: it has, in fact, done lasting damage to the country.On November 24, 2016, Manmohan Singh rightly described Modi’s demonetisation as “legalised plunder and organised loot”, and predicted that the growth rate might come down to 6% from a whopping 7.3 % in the third quarter ending September 2016. Many economists thereafter have predicted similar damage to the economy. The Centre for Monitoring Indian Economy (CMIE) has predicted that India’s GDP growth rate for the current financial year is set to slow to 6%, “on account of demonetisation”, and warned that there’s no hope of recovering from this slower pace for the next five years.

While Modi has squarely failed to deliver on any of the promises he made during the election, this destruction of India’s growth story will be his enduring contribution. This is what will be remembered by people for a long time to come.

Why did he do it? There was no economic reason behind such an ill-conceived and badly implemented demonetisation. On apositive note, it may have certainly served to neutralise the opposition’s, particularly Mayawati’s, stock of cash while the BJP remained unaffected on the eve of the Uttar Pradesh elections the BJP was so desperate to win. But more tangibly, it was meant to show off Modi’s proverbial 56” chest, making him a muscular leader who alone could take such bold decisions against the rich.

Modi has cast a spell over the masses with his oratorical skills and his hyperbolic speeches far too long. They believed in him, ignoring their own pains. They supported his demonetisation, thinking that he was punishing their tormentors, the rich. They gave him massive wins in post-demonetisation assembly elections. When they come out of their trance and realise the damage Modi has done to India, what will happen to the BJP’s apple cart that has set out to achieve Hindu Rashtra?