This is the third in the annual series of India Exclusion Reports, in which the Centre for Equity Studies has tried to bring together a wide range of policy thinkers and actors, scholars and social advocates. This is an initiative towards more just and inclusive laws and policies to examine carefully the record of the Indian State to ensure greater inclusion and access to the large mass of deprived and oppressed peoples. This is a modest effort, yet we are gratified to find that there are a growing number of readers of these reports. They agree with the value of an enterprise like this, that tries to create an informed report card about whether governments in India are ensuring equitable access of a range of public goods to vulnerable communities. It is also an effort to look closely at the most vulnerable communities. Considering that this year also marked the end of 25 years of neo-liberal growth, which promised to erase poverty faster than was possible in the past, this report assumes for a larger significance. 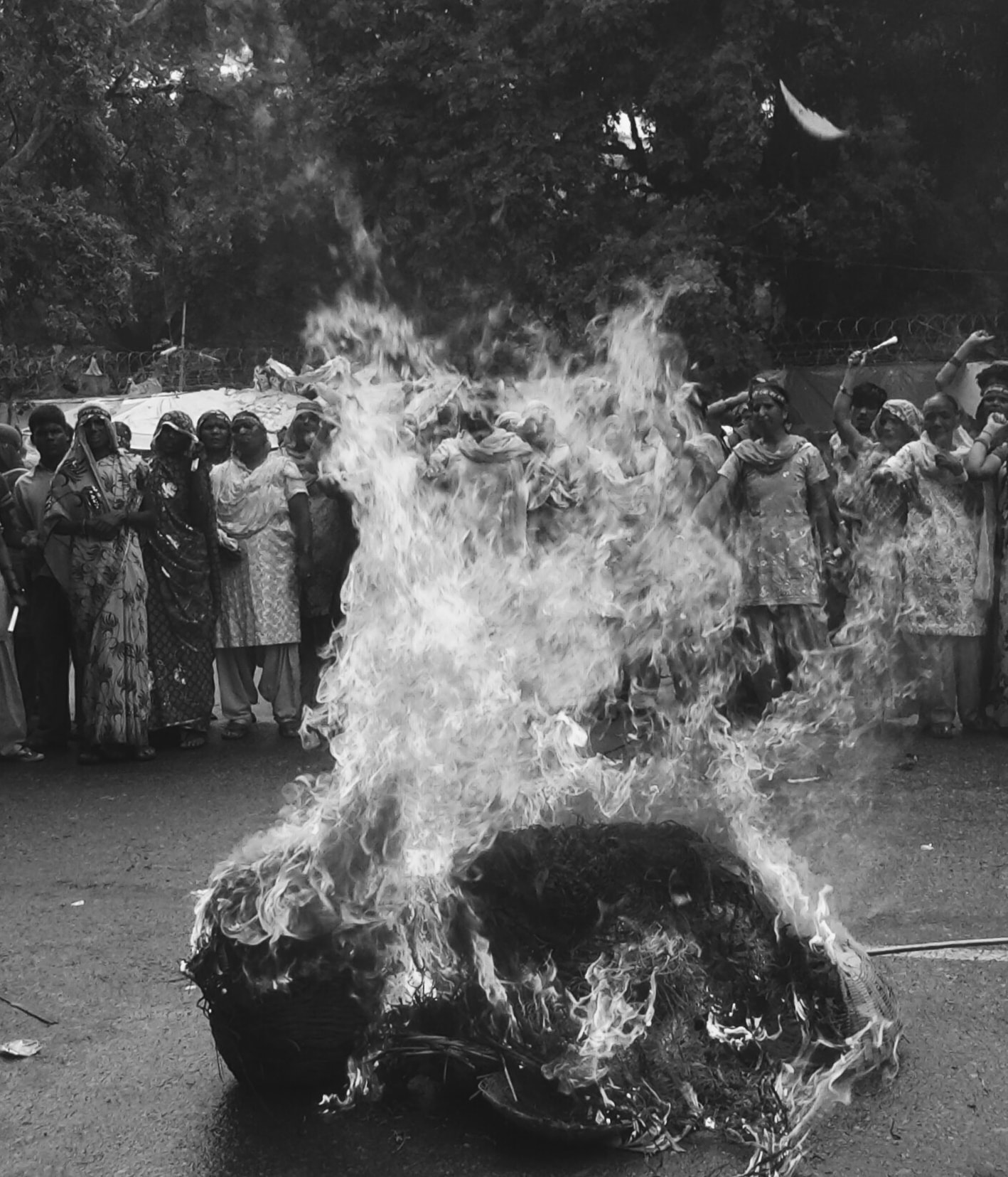 ‘For ours is a battle not for wealth or for power. It is a battle for freedom.
It is the battle of reclamation of human personality.’

We would like to begin this chapter with some difficult questions, perhaps at the risk of making you, the reader, uncomfortable. Why are the Indian government and even the media and civil society quiet about the death of more than a thousand of its citizens (Thomas, 2016)? People are being killed in sewer and septic tanks every day and yet, so far there has been no relevant discussion by policy makers, in state assemblies or the Parliament. By the time you are reading this essay, this number would have increased multifold. What could be the reason for this apathy and indifference? Is this because all who die in sewers and septic tanks are Dalits? Why is it that even amidst the rhetoric of development and progress in 2017, 1.3 million (FirstPost, 2016) Dalits in India, and mostly women, are forced to manually clean human excreta? Why does the country allocate a budget of INR 16,248 crore 1 for the Swachh Bharat Abhiyan while it has only INR 5 crore to spare for rehabilitation of manual scavengers, as per the Union Budget for the fiscal year 2017–18? Why is India unable to invest in finding a technology to clean sewer septic tanks without endangering human life? These are serious questions that the Indian democracy must answer.

The observations and arguments in this chapter are derived from decades of first-hand experience of having lived and worked within the scavenging community. Through the chapter we will highlight the ground reality and everyday experiences of people who are dependent on manual scavenging for their livelihood. The lives of scavengers in every aspect are defined and governed by livelihood ‘choices’ which are a direct consequence of the caste group they are born into and die a part of. The chapter will focus on the extent and nature of the problem of manual scavenging and describe the struggles that have taken place against it in an attempt to ensure an ultimate goal of elimination. Before delving in to this we want to emphasize that this aim to eliminate manual scavenging is linked with the process of annihilation of caste as visualized by Baba Saheb Bhim Rao Ambedkar. It is from Ambedkar that we, the Safai Karamchari Aandolan (SKA), draw our energy, strength and intellectual clarity. Our vision can be summed up with the following words—

We shall struggle and build solidarity to reclaim our dignity, equity and human personhood. Through eradicating manual scavenging we will break the link imposed by the caste system between birth and the dehumanizing occupation.

Why are People Dying?

Most people act ignorant when faced with the issue of manual scavenging. People have often asked us in surprise, ‘Are there human beings who carry other people’s excreta even today? Where are these dry latrines?’ These questions are often followed by an emphatic statement that they have never been witness to the act of manual scavenging. This speaks to a convenient blindness as the Indian Railways, prominently visible and public, is the largest employer of manual scavengers (IndiaSpend, 2015). Coaches are fitted with dry latrines from which the shit that drops onto the railway tracks, has to be manually cleaned. This denial, real or feigned, of the existence of scavenging speaks volumes about our cultural tuning and caste bias, where despite clear evidence, people cannot face the reality.

Similarly, sewer and septic deaths are not taking place in un-inhabited locations but in the midst of so-called smart cities, metropolitan cities, small towns and even in the National Capital. It is a national phenomenon. The post-mortem reports read the same for each death—gas filled in choked sewer lines or septic tanks killed the victim. Since the noxious gas is fatal, death is instantaneous. No great amount of analysis is required to see that methane gas is a killer, and yet, fellow Dalit citizens are hired for such jobs without hesitation.

The deaths of sewer workers with no one being held accountable, and the denial of justice has pushed the SKA to include the issues of sewer-septic workers within the larger ambit of the struggle against manual scavenging. This view has found some validity in recent legal and policy decisions. The Supreme Court, in a judgement in 2014 stated that in order to completely abolish the practice of manual scavenging, rehabilitation would have to take into account the issue of sewer deaths. This judgement first set up the grounds to bring the group of persons who were traditionally forced to clean septic tanks, sewers and open drains, under the ambit of Prohibition of Employment as Manual Scavengers and their Rehabilitation Bill, 2012. The Manual Scavenging Act, when passed in 2013 was passed with this clause, defining the employment of people for ‘hazardous cleaning’ as criminal. The caveat in the Act is that ‘hazardous cleaning’ refers to the employment of sewer workers without ‘prescribed protective gear’.

According to the Supreme Court judgement (Safai Karamchari Andolan & Ors v. Union of India & Ors., 2014) dated 24 March 2014, no human being should be allowed to enter into sewers or septic tanks for cleaning. The judgement says—

Sewer deaths – entering sewer lines without safety gears should be made a crime even in emergencysituations. For each such death, compensation of INR 10 lakhs should be given to the family of the deceased.

No steps to implement this judgement have been taken yet. Even at the time of writing this essay, we were informed that three people had died while cleaning underground drainage in Cuddalore (Tamil Nadu). The Cuddalore incident occurred on the heels of other similar deaths in Vijaywada, Bangalore, Mumbai. The list is endless.

We are very clear in our mind that we are not fighting for any protective gear or safety belts—we want that no human being belonging to any caste should have to enter sewer-septic tanks for cleaning. It is simply a big NO. 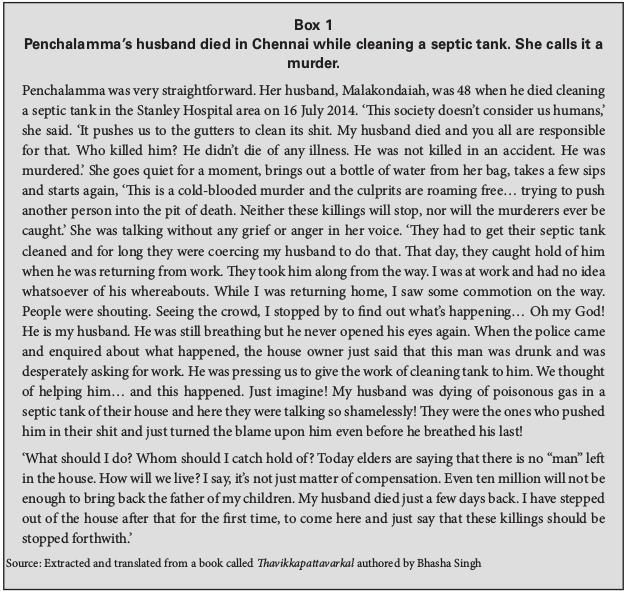 The struggle for survival of women like Penchalamma is not getting registered on any platform, despite such deaths being reported even from the National Capital, Delhi. On 11 November 2016, 30-year-old Chandan, who was working as a housekeeper in Vasant Kunj Square Mall died while cleaning the septic tank in the mall. Another man, Israel, got injured in the incident and is currently in a coma. Chandan Daloi was a migrant from Sundarban area in West Bengal. His wife Putul, who is hardly 24–25 years old, and her eight-year-old son Alok Daloi are now struggling to survive. In the whole Bengali Mohalla of Masudpur Dairy 39, no one was aware of the 2014 Supreme Court judgement or The Prohibition of Employment as Manual Scavengers and their Rehabilitation Act, 2013, both of which clearly define the work 300 of cleaning sewer-septic tanks without adequate protective gear, as illegal. Though the SKA is trying to help bring their families justice by intervening, the criminal silence that prevails has made our work all the more difficult.

This is an extract from India Exclusion Report published by the Centre for Equity Studies.

Bezwada Wilson is a social activist, and the national convenor as well as founder member of the Safai Karamchari Andolan (SKA). He was awarded the prestigious Ramon Magsaysay Award in 2016 for ‘asserting the inalienable right to a life of human dignity’.

Bhasha Singh is an assistant editor with Outlook (Hindi). She is also an activist, member of the Safai Karamchari Andolan (SKA), and a writer. Her book, Unseen: The Truth About India’s Manual Scavengers was published by Penguin in 2014.