Dakshinayan: The long path towards reason

A constant drumbeat broke through the murmuring of hundreds of voices, old and young, men and women. Margao, the cultural capital of Goa, had spent the last few weeks preparing to host hundreds of visitors from all over the country. For three days in November, the Dakshinayan Rashtriya Parishad was to organise the biggest demonstration of the fight against intolerance and the defence of freedom of expression. Appropriately called Abhivyakti, the programme began at Ravindra Bhavan on the 18th of November with participants from 11 states: – Maharashtra, Karnataka, Goa, Punjab, Bengal, Delhi, Haryana, Kerala, Jammu & Kashmir, Telangana and Tamil Nadu. Ganesh Devy, literary critic and activist, founder of Bhasha Research and Publication Centre in Vadodara, Chairperson of the People’s Linguistic Survey of India and one of the chief organisers of the Dakshinayan Conference in Goa, introduced the coordinators of each state. Speaking in Marathi, Gujarati, Kannada, Punjabi and Bangla, writers, poets, academics, cultural activists, and singers shared the stage to express their determination to defend free speech, fight intolerance and hail democracy.

Goa welcomed all of us as we marched silently from Ravindra Bhawan to Lohia Maidan, determined to mark our presence in the city that also hosts the headquarters of the organisation alleged to be behind the killings of Dr. Narendra Dabholkar, Comrade Govind Pansare and Professor MM Kalburgi. The ‘Sankalp Yatra’ or the procession of hundreds of rationalists, writers, activists and people breaking their quotidian routines to assert their right to free speech was led by the Hamid Dabholkar, Megha Pansare and Lingappa Kalburgi, family members of the rationalist, activist and academic killed at the hands of those professed to belong to the Sanathan Sanstha. On a windless, moist and overcast day, with drumbeats setting the pace of the march, the procession extended as far as could see. Marching past homes that have stood firm in the face of relentless assaults by invaders, adventurers, and most corrosively, sea salt, the army of writers and readers walked silently, registering their protest against the assault now waged on them. Bending and weaving past traffic, the march culminated at a place long remembered for the role played by Goans in the struggle for independence from the Portuguese, as well as Maratha dominance in the early 1960s. The significance of Lohia Maidan wasn’t missed by the hundreds that thronged to hear the voices of reason converging with the history of the city. 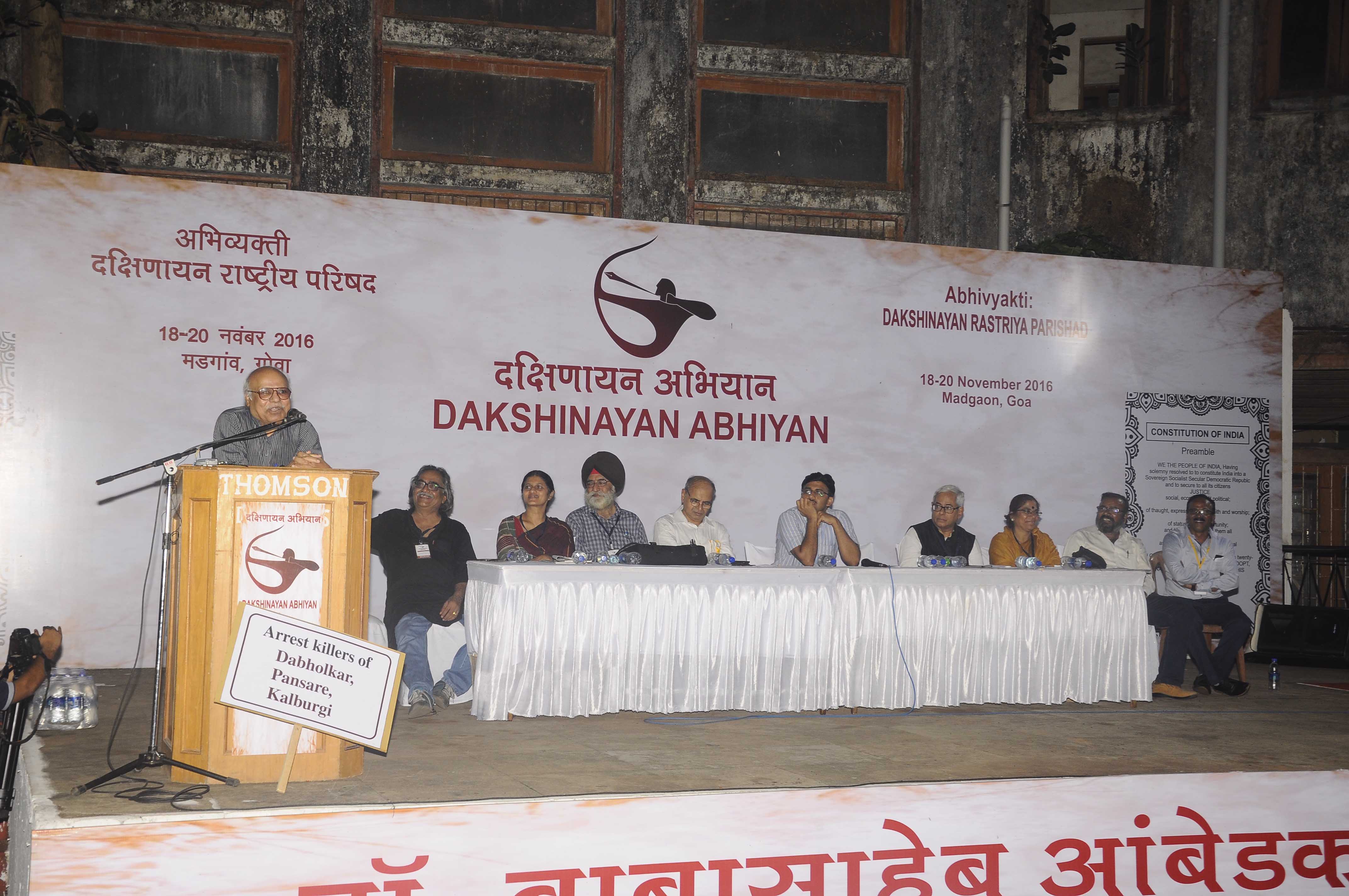 The public meeting began with Hamid Dabholkar, son of Dr. Narendra Dabholkar and one of the leaders of Maharashtra Andhashraddha Nirmoolan Samiti (MANS). Dabholkar reminded us that the killers of his father Dabholkar, Govind Pansare and MM Kalburgi belong to Goa and continue to roam free. He appealed to the writers and artists who returned their awards in protest that along with this symbol of resistance, they need to use the craft available to them to ensure that these undemocratic, anti-constitutional forces lose sleep at night in the face of democratic dissent.

Megha Pansare, a professor of Russian, women’s right activist and daughter-in-law of Govind Pansare, reminded the gathering to look at the agenda of organisations such as the Sanathan Sanstha. The Sanstha strives to make India a Hindu Nation; and anyone who criticises it is criminal, and their punishment is death. Offending and un-doing the founding principles of this country, the father of the Indian Constitution and the lives laid down for its independence, the Sanstha has spread fear and superstition in the name of making India Hindu. Pansare made it clear that today we don’t just fear such organisations and the killers that roam free. Today we fear the very government at the Centre, and those in its favour who wield control over our lives. Under the guise of development and national interest, their agenda is to make India Hindu. This is reflected in the cases of defamation and sedition filed against writers, activists, intellectuals, journalists, filmmakers, and now, even TV news channels. This reflects the power of voices of reason, voices that those in power are relentlessly trying to silence.

Returning awards was one of the first signs of protest emerging from among the literary world in the subcontinent. The small state of Punjab saw 13 writers returning the Sahitya Akademi award. Playwright and poet Atamjit Singh found that the history of resistance against majoritarianism and imperialism plays a role in this unprecedented display of solidarity by Punjabi writers. He felt that the definition of nationalism was being changed to suit the needs of those in power. This, he said, needs to be contested. The cultural ethos of Punjab allowed him and others to recognise the communal tones underlying the hatred stoked against the neighbouring countries by the existing political regime.

Marathi writer Dhanaji Gurav brought to focus the role of the literary world in the battlefield of cultural politics waged by right-wing organisations like the RSS. He questioned the contribution of the RSS and similar groups in the history of the country, and reminded us that history is being re-written to suit those in power. Women’s right activist and poet K Neela drew the link between the silence of the majority and the advance of fascism in the country. She reminded the audience that while the democratic people of this country uphold the Constitution drafted by Ambedkar, majoritarian Hindutva forces uphold the Manusmriti as their guiding principle. It is the latter that is trying to replace the Constitution to which each citizen of this country adheres. At a time when videos of flogging dalits in Una, lynching Muslims in Uttar Pradesh and the recent encounter killing of Muslims in Bhopal are regular visuals of graphic violence perpetrated by right wing forces, the role of technology and power needs to be seen in a new light. In the case of Bhopal, the officials of the state responsible for maintaining law and order were seen using and abusing the power vested in them to defend brutal violence. Gujarati filmmaker Manishi Jain observed the way in which technology is turning into a weapon in the hands of the powerful. Today, it appears that information and technology is helping the state move towards totalitarian rule. This rule intends to control and curtail every aspect of life necessary for the development of a free-thinking critical individual.

The gathering at Lohia Maidan had to look back to the past before it could find a way ahead. Konkani writer Prashant Naik navigated through the lanes of collective memory—just a few meters from where he stood, the Madgaon blasts rocked the shared foundation of Goa’s cultural heritage. The blasts, orchestrated by members of the Sanathan Sanstha, needs to be seen alongside the history of the independence movement against the Portuguese led by Lohia at this very same spot. The struggle of the people of Konkan and Konkani language to assert its independence in the face of Marathi dominance is another historic fight that was recalled. But to what end do we fight and for how long? Marathi intellectual Raosaheb Kasbe invoked the significance of the human impulse to make life meaningful. Within every human lies a potential that needs ‘abhivyakti’ – to express freely. The core of the Indian Constitution for Babasaheb Ambedkar was the people of this country. Invoking Ambedkar’s vision, Kasbe raised the banner of humanism in the face of ascending fascism. Gujarati writer Uttam Parmar laid bare the history of communalism perpetrated by organisations that fall under the banner of the Sangh Parivar. Since the demolition of the Babri Masjid, our country has been reeling through an undeclared emergency. At a time when religion is used to define the self, it becomes neatly tied to power and money. It is this that needs to be fought, Parmar emphasised.

Tying the narratives from across regions and languages, Ganesh Devy’s appeal brought together the freedom of expression and the fight against intolerance as the essence of human spirit. Dakshinayan, “the long path towards a beautiful dawn”, builds the hope that creates the thing it contemplates. That evening in Lohia Maidan, amid the drumbeats and the murmuring of the young and old, we hailed the dawning hope that brought us all together. 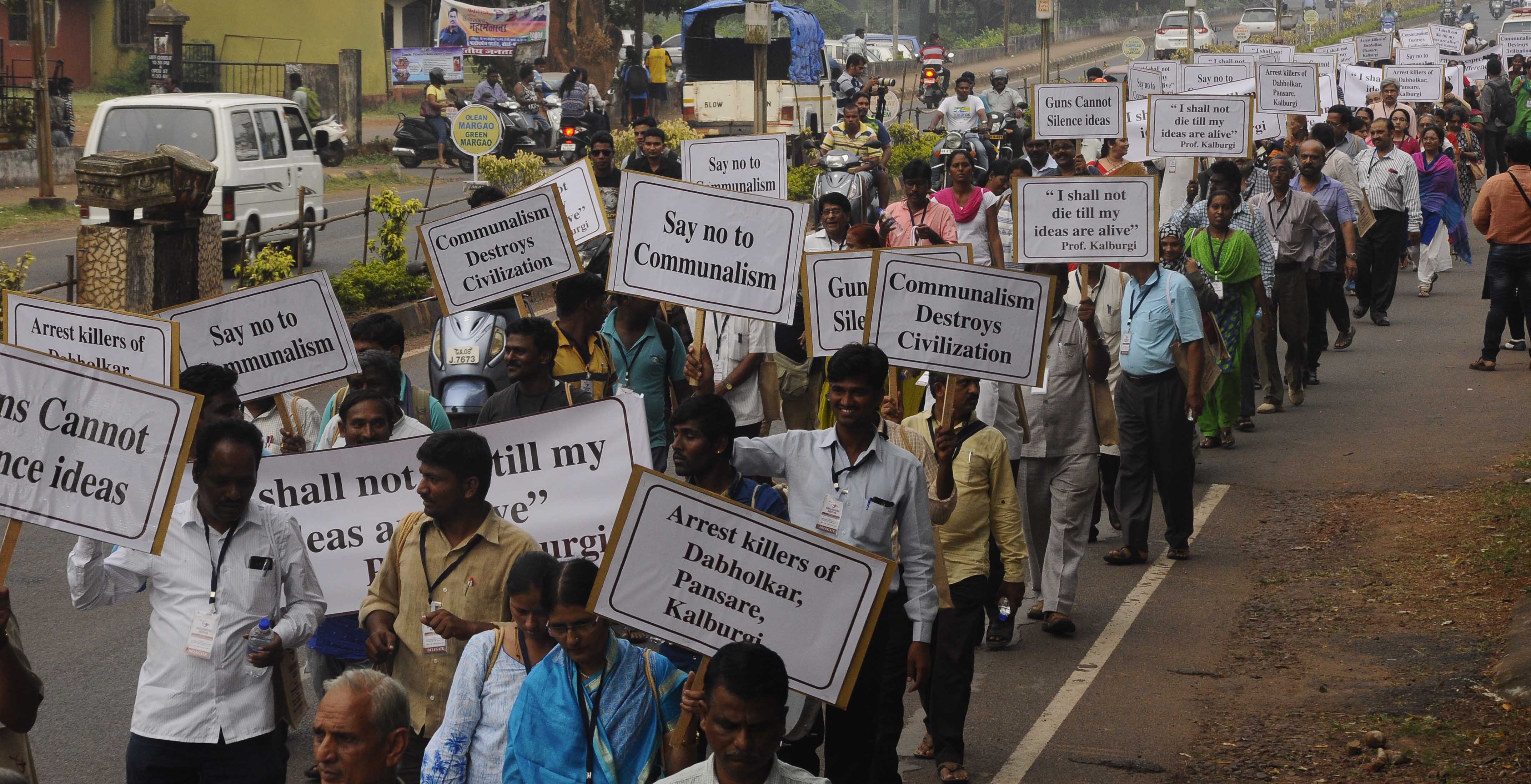 Vidhya is part of the Editorial Collective at the Indian Cultural Forum.