Chalo Udupi: Food of our choice, land is our right

Thousands of people from 166 dalit, Left and progressive organisations, as well as writers and cultural figures were part of the Swabhimani Sangharsha Jatha from Bengaluru to Udupi between October 4 and October 9. The theme of the jatha Chalo Udupi was Food of our choice, land is our right. This theme articulated the mounting protest against using the cultural politics of the “sacred cow” to assault dalits, minorities, adivasis, women and all the oppressed sections of the citizenry. At the same time, it emphasized the demand for five acres of land to every Dalit family.

The Pride March began on October 4 from Freedom Park in Bangalore and went on to Nelamangala, Kunigal, Channarayapatna, Hole Narasipura, Hassan, Beluru, Chickmagalore, and Koppa on October 8 for a convention. It ended in Udupi on October 9 with a huge rally. Public meetings were held all along the jatha route, and they included, in particular, college students.

The ICF team spoke to Huchangi Prasad, who was in Udupi. This is a summary of what he told us.

As in Una, the foremost demand was for five acres of land to be distributed to all Dalit families. Jignesh Mewani, who became the face of Dalit assertion in Gujarat, reiterated this central point in Udupi as well.

One of the aims of the Pride March was to insist on the right of choice of food – beef or otherwise. Food is an individual choice in a country like India, and every citizen, whether Dalit or from the minority or backward communities should be confident of their right to live as they choose, as long as no law is being violated.

The murder of Praveen Pujari by a gang, allegedly for illegal transport of cows, was fresh in everyone’s minds. On October 8, members of the Chalo Udupi team met Baby, Praveen’s mother. She was clear about who was to blame for her son’s death: Hindutvawadis. “Even after my son told the attackers that the cows did not belong to him and that he had only rented the vehicle, and asked them to check with the police if they wanted proof, the gang of inhuman rowdies indiscriminately attacked my son. It appears that they consider the life of a cow more important than that of a human being.”

The participants of the jatha made it clear, from the earliest meetings of the march, that the right-wing agenda divides the country so that large sections of the people continue to be marginalised. Their demand is that the rights of every citizen in this country must be protected. To this end, the plan is that every progressive group exert pressure on the state and central governments to prevent repeated atrocities on the country’s own citizens; demolish, in practice, caste discrimination; and reach out to people to counter the superstitions and divisive propaganda of right-wing organisations. Most of all, awareness and education are critical to ensure that the youth of the dalit and backward communities, and the oppressed classes in general, are not used by the Sangh Parivar. The collective plan is to maintain the momentum of the Pride March by organising district level meetings and conventions in all 30 districts of Karnataka over the next few months. The movement carries important messages on cultural politics for the people; and these, the participants of Udupi Chalo feel, will build the confidence so necessary to keep up their resistance. 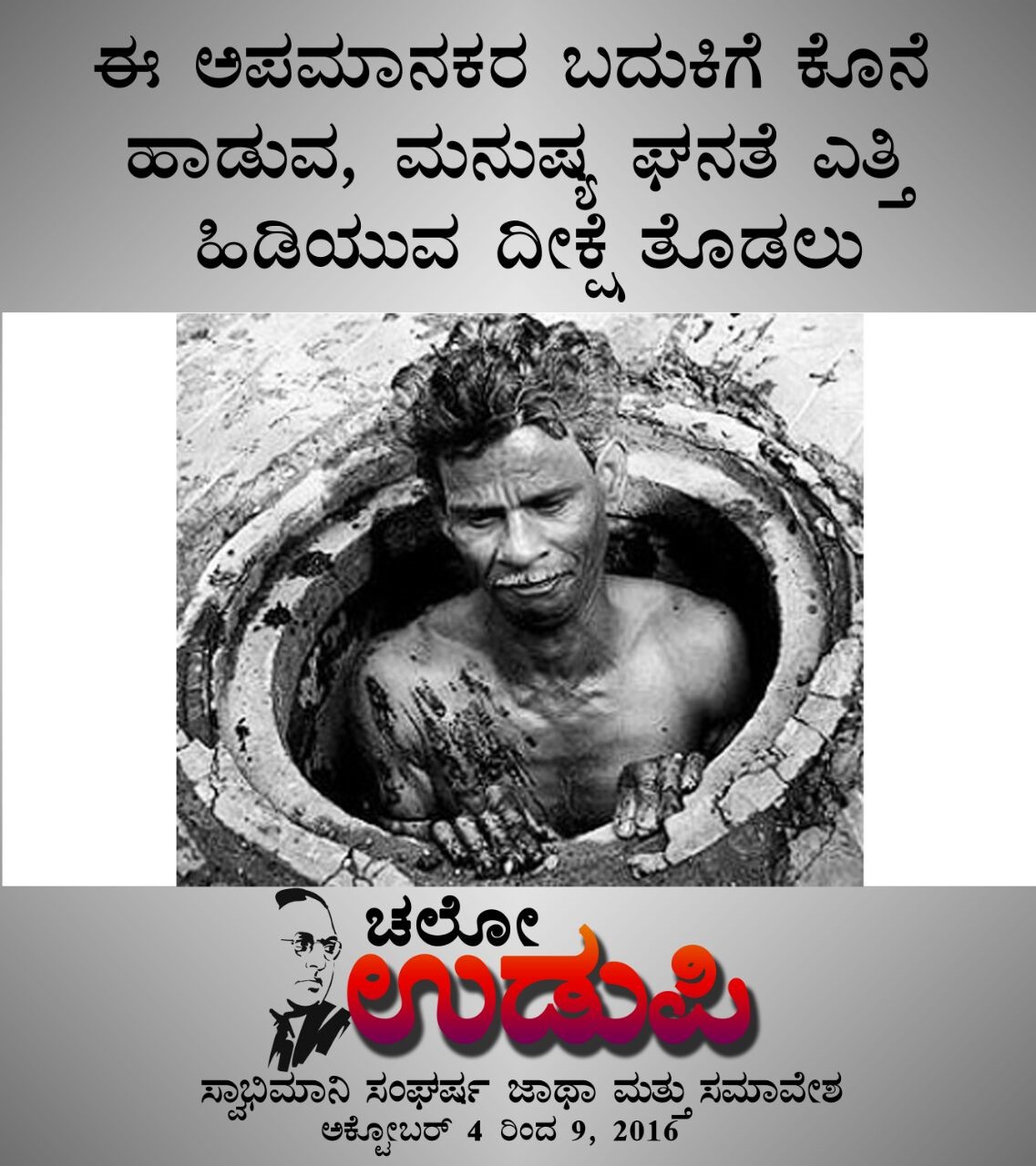 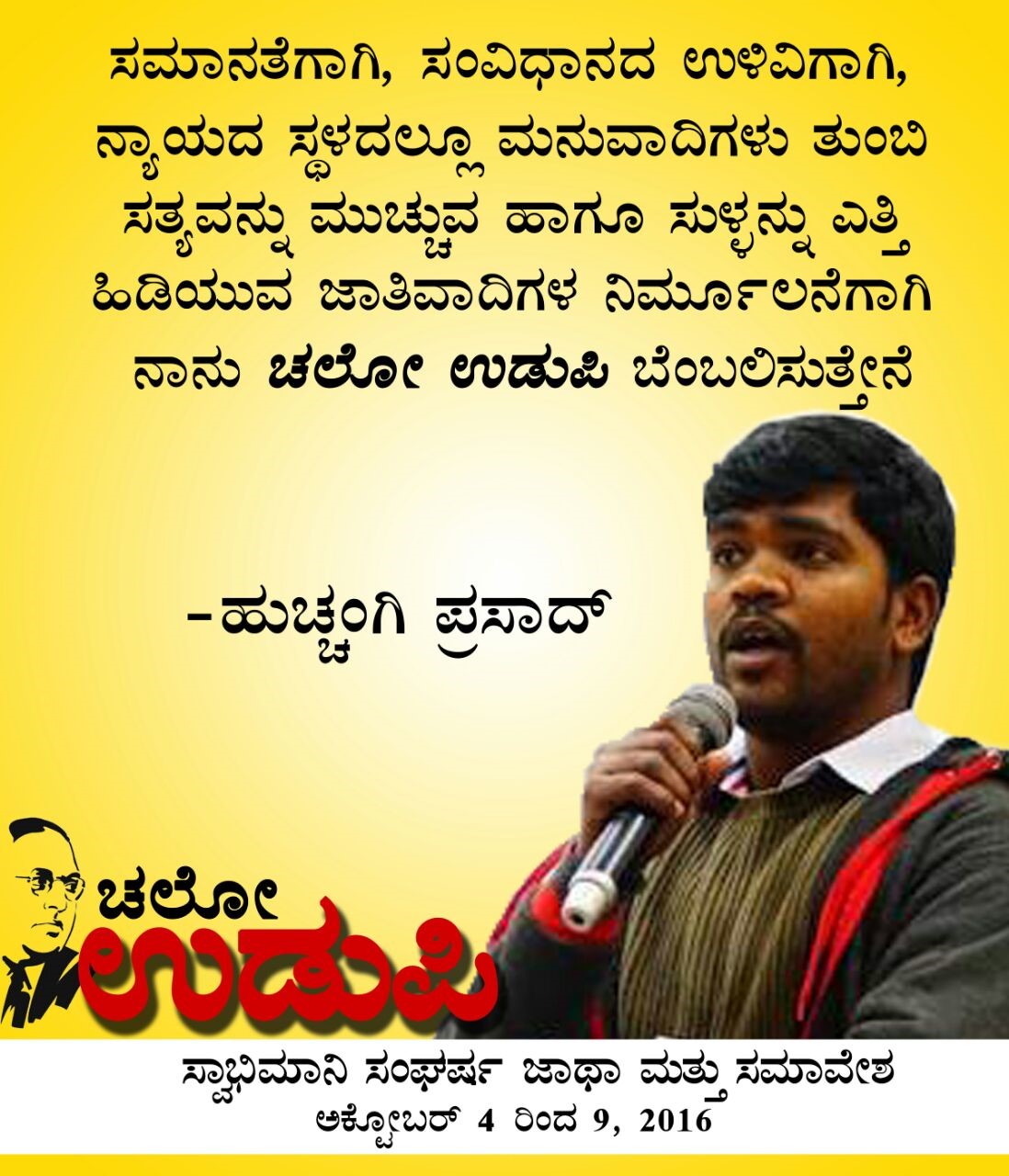 All photos not credited are courtesy Chalo Udupi 2016.