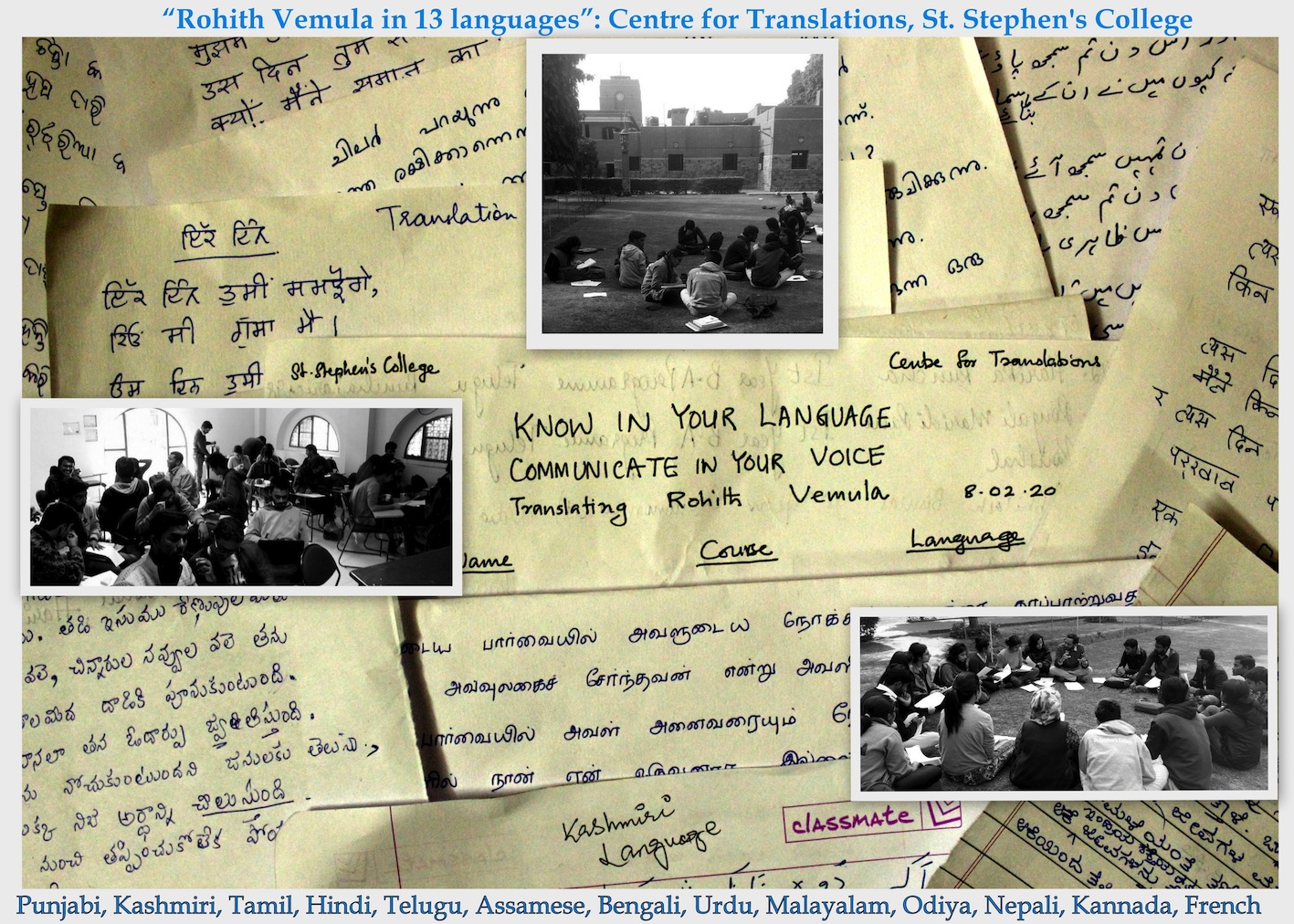 The Centre for Translations at St. Stephen’s College, Delhi University, organised a translation workshop on February 8, titled ‘Know in your Language, Communicate in your Voice: Translating the Works of Rohith Vemula’.  The invitation to the workshop read:

Rohith Vemula’s suicide note has rocked the political imagination of our republic, because it points to the hollowness of the promises we as a people set out to deliver for each of us.  His writing demonstrates how we are already at the dead end of language, a situation necessitated by the ethical vacancy of our actions.  Translating the work of this exceptional writer, bearing him across to one’s own socio-cultural and linguistic givens, is a step that can make us realise the limitations of knowing and awaken us to actions.  This event proposes to sit around and translate Rohith’s poems into regional languages and then read them aloud to others for them to feel the vitality of it.

Whatever be your language—Tamil, Assamese, Kashmiri, Hindi, Gujarathi, Marathi, Bengali, Sanskrit, Malayalam, Telugu, Urdu, Manipuri, Punjabi, Kannada or Oriya—if you feel for the cause of social equality, if you are outraged by the way Dalits have been systematically rejected by the centres of higher education in our co​untry, if you feel for the millions who are oppressed and exploited by casteist mindset and its machinery, you might want to come for this afternoon of making sense through collective translations…

She collects hearts.  And she never cares for them afterwards.  Like footsteps in wet sands, like smiles of children.  She attacks lives.  Like a breezy rain on a lonely night, a soothing that burns.  Everyone knows that she takes off lives, ripping the sense out of your life, yet no one has ever escaped her.  Like death, like love.

Some say she has an agenda, like saving the world.  How to tell her that I am also a part of world?  Some say she loves everyone.  Why am I not in everyone’s part?  Every lip I kiss tastes like loneliness.  Every hug I make is shrinking me further.  Every glass of alcohol seems like an elder with an advice I need to decode.

Should I be sorry that I didn’t friend her in this life?  Or should I be happy that I got a reason for one more life?

One day you will get to know why I apologized.
On that day, you will understand
there are traps beyond the fences.

One day you will find me in the history.
In the bad light, in the yellow pages.
And you will wish I was wise.

But at the night of that day,
you will remember me, feel me
and you will breathe out a smile.

And on that day, I will resurrect.

Prof N.P. Ashley, coordinator for the workshop, writes: ‘The poems were first read aloud in English.  Afterwards, participants divided into language groups and translated the poems.  The translations were then read aloud to other participants in the workshop.  Thus the event gave a sense of a pan-national reality in regional languages, bringing out the thick texture of languages within India. It drove all of us into the complexities of “understanding” life experiences and the need to work with them for making it one’s own as an ethical responsibility in however limited a manner.  It was a rewarding time of engaging with the social content of Rohith’s poetry for all of us!’

The Centre for Translations has also prepared this short, beautiful video of the poems being read aloud by workshop participants in twelve languages: