old post
Inside JNU, Solidarity Holds Us All Together
February 16, 2016

On February 15th, lawyers who support the BJP beat up the media, and harassed those attending the hearing of JNUSU President Kanhaiya Kumar. Why should the presence of teachers become such a threat? Perhaps the answer lies in a simple act of holding hands in solidarity? On February 14th, almost three thousand students, faculty members, alumni, and supporters formed a human chain inside the campus after the press conference called by the JNU Teachers’ Association (JNUTA). 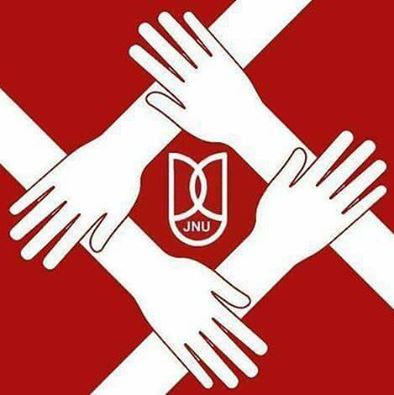 As always, it is colder inside JNU. It is evening. 5 p.m.  We are sipping tea at Ganga Dhaba. The JNUTA has categorically said that the VC should have set up a committee and investigated the matter internally. “But do you not have faith in the investigation conducted by the Delhi Police?” asks someone representing the press. “It infringes on the autonomy of our university” is the reply.

I receive a different answer from Asmita Kundu, an M Phil student at the Centre for English Studies. I enquire about a common friend. “He is quite afraid and traumatised. He was very scared when there was load-shedding last evening. He thought they had come after him now.” He has his reasons to feel the way he feels. When the police enter hostels and lock gates, make random checks inside hostel rooms, his fear is not unfounded. The autonomy of the university is not a simple variable factor of evaluating our education system. It is also a question of ensuring security inside the campus. Can the experience of a possible police search be anything but traumatic?

We have finished our tea. We hold hands now. We form a human chain. This chain extends from Ganga Dhaba to Lohit Hostel – the longest human chain in the history of the campus. 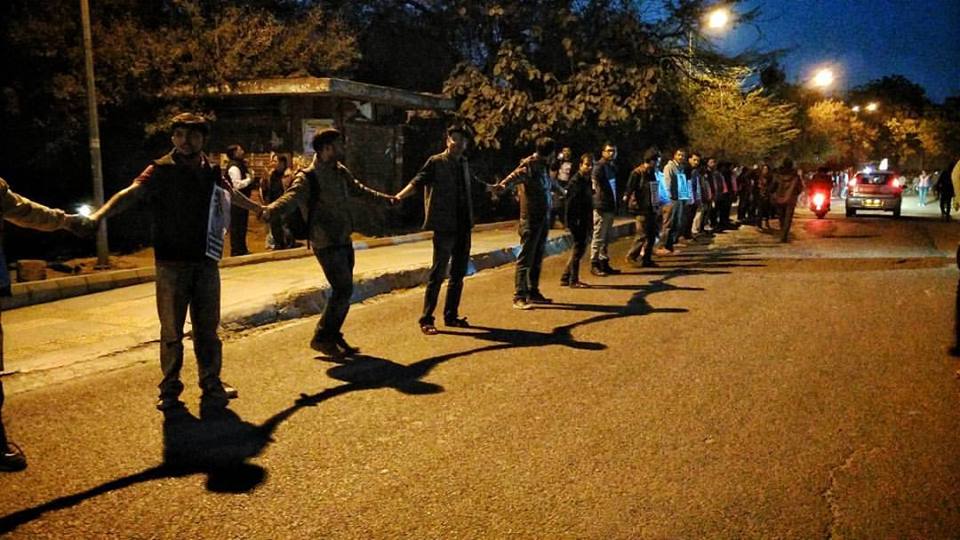 We then converge at the Administrative Building of JNU. There is no microphone. Sehla Rashid, the sole member of the JNUSU, addresses the gathering of thousands. “Tomorrow, we will call a strike inside the university. When we know that our friend is behind bars, we do not feel like attending class.” Later, she describes the kind of freedom the campus desires: “We want freedom from WTO. We want freedom from AFSPA. We freedom from a minority who think they can hold power in their hands”. Her voice fills the air with poignancy, with grief, with anger over a fellow student’s arrest. It is soon punctured with the sound of claps. Inside JNU, freedom is not just a matter of discourse but a felt experience. It is pricks your skin, teaches you what solidarity feels like.

Another incident which occurred two days ago. This too involves holding hands. In the public protest meeting attended by the members across the political spectrum – from Sitaram Yechury to Rahul Gandhi – around 150 ABVP supporters raised slogans and even attacked  Anand Sharma of the Congress. The assembled crowd of 3,000 did not get provoked, and faculty members formed a human chain to act as a human shield. Perhaps this is what provokes the protesters who are quick to call themselves the true nationalists: the progressive voices of the university do not get provoked into physical confrontation. They believe in public debate and discussion. Now, we have to ask ourselves, since when did debate and discussion become anti–national? Since when did our republic start finding the fires of nationalism in physical confrontation?

Souradeep Roy is part of the editorial collective of the Indian Cultural Forum and Guftugu.