Book extract: from Looking Away: Inequality, Prejudice and Indifference in New India

Harsh Mander’s latest book laments the erosion in the imperative for sympathy at both  state and individual levels. It is this erosion that is principally at the base of the vast inequities which afflict India. In this extract, Mander compares the traditions of pluralism and acceptance in India with those of Scandinavian nations – traditions which are at the root of the very idea of India, traditions which are now, unfortunately, at risk. 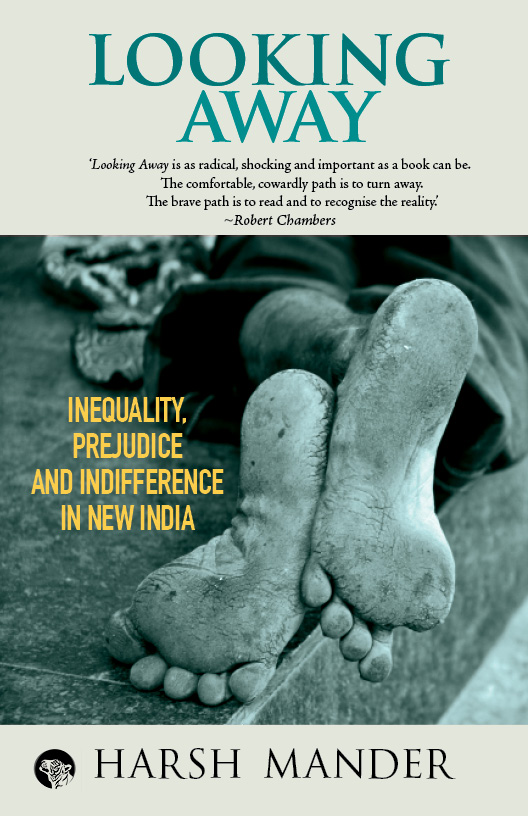 My personal faith choice is that of agnosticism, the acknowledgement that I do not know if god exists, or if there is life after death. I find this position more scientific than atheism, because even atheism is based on certainty, whereas we truly do not know. But more than scientific rationality, what is more important to me are the social ethics of my agnosticism. It is not just that I do not know if there is a god. I do not even want to know, because this knowledge should not be the driving force of my life choices. I love the Sufi story of Raabia in the twelfth century, who feverishly runs up and down the streets of the Iraqi town of Basra with a bucket of water in one hand and a flaming torch in the other. Asked why she carries the bucket of water, she says she wishes to douse the fires of hell. Then why the flaming torch? She wants to set heaven on fire, she says. I should lead the good life neither out of fear of the fires of hell, or the desire for heaven, but only because I am convinced that it is the right thing to do. This knowledge alone should be enough for me.

I recognise more clearly now that our understanding of secularism in this country is not the denial of faith but equal respect for every faith, including the absence of faith. This is the secularism of Ashok, Kabir, Chisti, Nanak, Akbar and Gandhi. Many argue that we should not describe this principle as one of secularism, but find another name for it. I am content to call it secularism, as long as we agree on what it entails. If a person’s faith leads them to oppressing women, people of lower castes and sexual minorities; to hating people of other faiths; and into superstition and unreason, then it should be opposed resolutely by all means. But, if it leads people to greater compassion, or gives them solace in moments of bereavement, then why should it be negated? Faith may not work for me, but why should I object if it works for someone else? How can I be so convinced that I am right and the other wrong?

The two persons in India’s public life who sacrificed the most for the secular idea of India — Mahatma Gandhi and Maulana Azad — were deeply devout, and this is what spurred their politics of unshakeable respect for the faith of others. Gandhi paid for his belief with his life. The two people who, during India’s freedom struggle, most influentially led the battles for a state based on religion were Muhammad Ali Jinnah and Vinayak Damodar Savarkar. Jinnah was not a practising Muslim most of his life, and Savarkar was a self-professed atheist. There has to be a moral in this seeming paradox somewhere.

Azad was passionately opposed to the two-nation theory, declaring, “Religion has never been a binding factor in the formation of nations.” He wrote: “It is one of the greatest frauds on the people to suggest that religious affinity can unite areas which are geographically, economically, linguistically and culturally different.” He added, “The basis of the partition was enmity between the Hindus and Muslims. The creation of Pakistan gave it a permanent constitutional form.”

The modern secular state in India has no religion, but is bound by the “higher morality of the Constitution”. It is also bound to ensure equal protection and equal rights without favour or prejudice to all people regardless of their faith, and to their gender, caste, class, language and place of residence. But the democratic state is not simply a hands-off religion, as the colonial state was, and as many Western democracies are. It is not freed from both the right and the duty to reform what is unjust — such as to women, children or disadvantaged sub-groups — under the rubric of accepted religious practice.

The greatest challenge which all countries will have to face and resolve in the twenty-first century are the ways in which they will deal with the two paramount challenges of inequality and diversity. But the understanding of how these challenges are to be dealt with varies widely in different parts of the world. The nation-building project in countries of Europe was sometimes one of coercive — and often violent — homogenisation, in which minority languages, faith systems and cultures were forcefully submerged in the hegemony of the majority language, culture and faith. In contrast, India has traditionally dealt with diversity in ways that are respectful of pluralism, even though social values attached to the practices of different groups are intensely graded and hierarchical. It is only the Hindu nationalist project which is homogenising — what Ramachandra Guha once described as an enterprise to create a Hindu Pakistan. It requires conformity with what is deemed to be essentially Indian — an upper-caste, male, north Indian, Hindi-speaking, heterosexual Hindu. The degrees to which an individual is not any or all of these render that person a lesser Indian. This is why Hindu nationalists have been so implacably opposed to Gandhi’s humanist secularism founded on his devotion to the Hindu faith, as much as to the secular democracy enshrined in the Indian Constitution.

In early 2013 I was invited to speak about inequality at the Danish Parliament to some parliamentarians, senior intellectuals and activists. Since I had arrived a couple of days early, I decided to look at what Denmark does for its homeless populations, and learn something from it. It was snowing, and temperatures in Copenhagen had plummeted to minus 10 degrees centigrade. I had expected to find the best programmes for the homeless in Denmark. Instead, I was told that the Danish government takes care only of those homeless people who are Danish.

Since almost every homeless person in the city was non-Danish, I asked who took care of them. I was told it was the church. My local hosts helped me establish contact with the church, and I met a priest, a wonderful, compassionate young woman in jeans about my daughter’s age. She said the church was able to provide a roof and food to ninety homeless people. For the remaining — at least a thousand people — there were no arrangements at all.

I realised then how inextricably intertwined are the ways a society deals with inequality and how it deals with difference. India has dealt very badly as a civilisation with the challenge of inequality, but has fine historical traditions of religious tolerance and coexistence. In contrast, I found that whereas Scandinavia today sets some of the highest standards on the planet with its welfare state, in dealing with inequality, it is troubled and confused by different immigrant populations of diverse colour, clothing and faith, who have made their country their home more recently. It is probably this anxiety with difference which overpowered their otherwise sterling instincts and social contract for greater equality through interventions by a caring state.

From Looking Away: Inequality, Prejudice and Indifference in New India by Harsh Mander, Speaking Tiger Books, 2015.