They feared his words: A tribute to M. M. Kalburgi 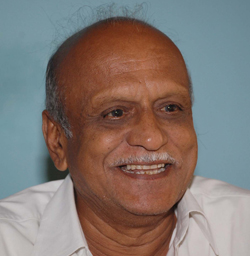 “You fear words. Men who fear words exult in human blood. You can silence me, but you cannot silence truth. Truth and fire are ever inextinguishable. They will always keep burning somewhere. One spark is enough to create a conflagration.”

These words, spoken by an untouchable old man in M. M. Kalburgi’s play Basaveshwara’s Revolution – when the Brahmins shout and scream and ask the King to sentence Basaveshwara to death in exile and King Bijjala promptly dismisses him from his post as the Finance Minister of his country – could well have been the playwright-scholar’s own words addressed to the cowards who murdered him.

Yes, they feared his words of reason. They feared them as much as the Brahmins of Basava’s time feared Basava’s dauntless speeches and scalding verses, that condemned every form of religious hypocrisy and social hierarchy; and taught his people to dream of another world where all forms of discrimination based on caste, race and gender would vanish, and they would all just be what they are: human beings.

Kalburgi was not merely an academic who did revealing research on Basava’s life and work, but an honest practitioner of Basava’s thought. Examining folklore and the vachana literature of the Veerashaivas, he had concluded that the 12th century religious philosopher Cahnnabasavanna (nephew and disciple of Basaveshwara) was a leather tanner (dohaara). He made his conclusion public in Marga, a landmark collection of his well-researched essays, which was to be the first volume of his collected essays, published when he had just turned 50. A section of the Lingayats, who hold Channabasavanna in reverence and awe, and think of him as one of the pioneers of the cult, were offended by Kalburgi’s proposition. They threatened to kill him.  Kalburgi was even summoned to a Lingayat mutt in Dharwad and persuaded to recant his statement under threat to his life. That day he felt terrible – much like Perumal Murugan did when he had to tender an apology for his novel’s reference to a temple ritual in his village.

But that was not to deter Kalburgi from his original research or his bold declarations of path-breaking discoveries. The 1938-born scholar, the most well-known authority on the history of Karnataka and its culture, literature and folklore, the author of 80 books, editor of several volumes of Vachana literature where for the first time he had presented hitherto unknown Vachana poets he had discovered, Vice-Chancellor of the Kannada University, Hampi, recipient of several prestigious honours like the Karnataka Sahitya Academy Award, Karnataka Rajyotsava Award and Sahitya Akademi Award, continued to write  and make statements that might have been provocative to some, but were always supported by meticulous research.

The claim that proved fatal to him was that the Lingayats were not Hindus, but had a distinct religious identity, and that this religion preceded Hinduism in Karnataka. He was also frankly critical of the Lingayat priests, a new “Brahmin” class, whose very existence was against Basavanna’s non-hierarchical and egalitarian social ideal. Kalburgi denounced the Bhagavat Gita publicly, and criticised idol worship and rituals that had crept into Lingayat practice. Kalburgi was not an atheist as Pansare or Dhabolkar, murdered before him in similar circumstances, were; but his view of religion was quite radical like those of Kabir, Namdev, or Basavanna himself. Kalburgi supported U.R. Ananthamurthy when the latter ridiculed idol worship at a seminar. Kalburgi’s discovery of the positive aspects of Muslim rule in Karnataka, and his attempts to bring evidence by translating works in Persian and Urdu, and his stance against the celebration of Ganesh Chathurthi by Lingayats, irked the right wing forces who had managed to penetrate into the Lingayat stronghold in a big way. He refused to be scared of fundamentalists, and said he was not afraid of death in the hands of those who had murdered Gandhi and Basava.  That was why he refused state protection when it was offered to him.

Kalburgi belonged to a rare class of original thinkers and social critics who force society to look at itself critically, to change its old ways, and rewrite its history in the light of new discoveries. He will continue to speak to generations of men and women whose religion is truth, and who long to create a non-violent and just society.

http://www.ghadar.in/gjh_html/?q=content/basavanna-and-royal-treasury and a portrait of a tireless researcher